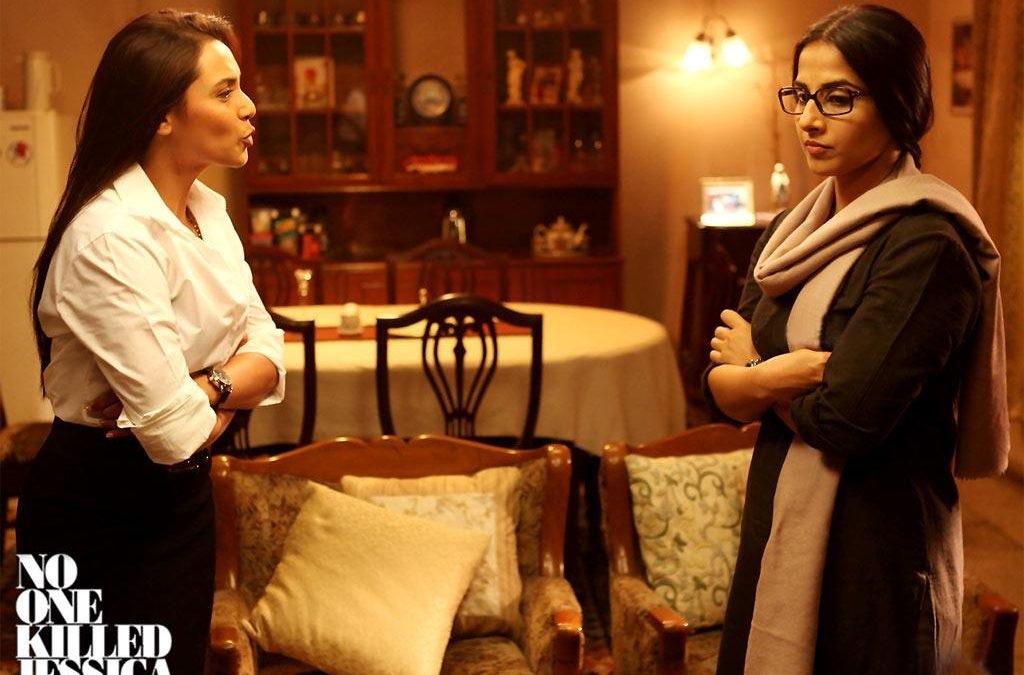 I went into the movie with sky high expectations, courtesy the music and the promos, which have if not anything else made a well known murder case look interesting. Is the movie bad? No. But yeah…by the end of it you are left yearning for more.

I am not going into details of the case because it is so well known. Jessica played by the very pretty Myra, in the movie, is shot by a big baap ka beta. The Baap happens to be a politician who does everything in his power to get his son out. And the maa, keeps repeating the words ‘Mere monu ko kuch nahi hona chahiye’ to the baap, which gets laughs out of the audience everytime. Vidya plays Sabrina, the sister who is left to pick up the pieces and who gets justice after 11 years of struggle. And Rani plays Meera, a journalist who doesn’t show an interest in the case at all till the culprit is let out.

The film is if not anything else, good story telling. Everyone knows what had happened but still the happenings on the screen seem engaging. You still hope that the witnesses would tell the truth. More than that, the movie points out the intricacies of the system in a way that is unseen. The honesty of the police officer is not judged by whether he takes the bribe or not but the reasons he takes bribe for.

Vidya is good but nothing more. The expressionless face with constant pain, is alright for the first 20 minutes of the movie but after a while just mingles into the many other faces you see in the film. The movie scores on the fact that it makes the audience laugh at moments, even though it is all supposed to be very sad. It is like attending a funeral and while everyone tries to keep a straight face….sometime it is just better to laugh and not feel guilty about it. There is a scene in the movie where the character of Sabrina starts laughing when the witness lies. It is not a sarcastic or painful laugh. It is just a laugh at the absurdities of the situation. And the rest of the court laugh after her. And then the audience.

Rani’s character is used as a narrator, which i think is the biggest mistake on the part of Rajkumar Gupta (director). Narration after all is the poorest form of storytelling. The few brief scenes she has in the movie, you can’t take your eyes off her. It takes one good performance from a real actor for me to wonder what is the fratpack of fashionistas (katrina, deepika, sonam and what not) even doing in hindi movies.

The music is fantastic. Its is not used in the best manner but still is great to listen to. One of the major problems with the movie is the editing. And also, while the story has been full justice, there were parts or just the time frame (7 years) which should have been left out. Delhi, shown in the movie is not the dilli of 1999 and that is all too evident. And the monologue about the complexities of the city by the character of Rani mukherji, though highly touching for me (because of my love of the city and its brashness) may not be as entertaining for the rest of the country.

Should you watch the movie? It’s upto you. It is not a bad watch but please don’t take small kids along like people did in my movie hall….