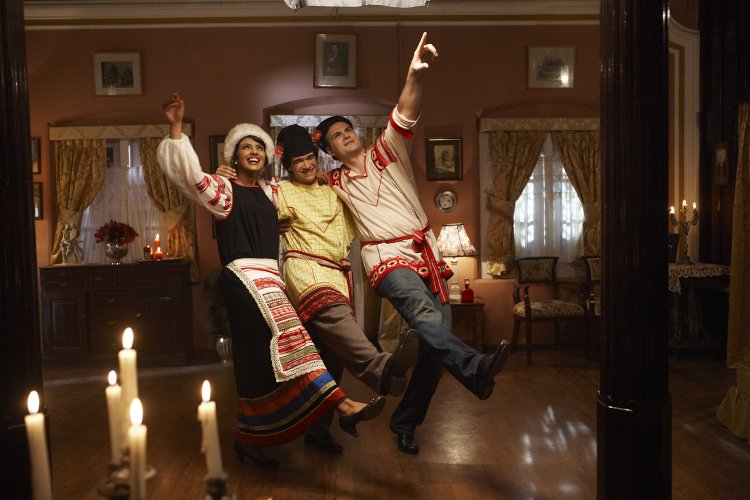 The premise of the movie ‘7 Khoon Maaf’ sounds extremely intriguing. A woman killing off all her husbands one by one is not something you come across often. But for all the mystery that I had created in my head as to why she does it, its all very simple. She just ends up with a lot of wrong men, partially because she is too naive and a little dumb. She is the quintessential bollywood woman, who character has no aim in life but just to fall in love.

The story is narrated by the character of Arun (Vivaan Shah) a forensic doctor who is assigned the case to prove that Susanna Anna-Marie Johannes (Priyanka Chopra) is dead. He is also the child who grows up watching her and whose education is sponsored by her. The story of Susanna starts from her father’s funeral after which she gets married to Major Edwin Rodrigues (Neil Nitin Mukesh), as the last wish of her father. Edwin is like any other jealous, possessive husband prototype whose ego is too big to take. The fact that he is crippled makes him almost intolerable and he is duly fed to a man-eating tiger, and the entire incident is sold off as an accident.

Then comes Jimmy Stetson (John Abraham) whose marriage with Sussana starts off well but soon she finds that the Jimmy she had married is long gone and the one she is left with is a drug addict. Jimmy is the first man she actually fell for and so she tries her level best to save the relationship. She fails and instead of just leaving, she kills him with an over dose of Heroin. In all these incidents her three servants (one of them played by Usha Uthup) help her out.

Third one is Wasiullah Khan (Irrfan Khan), a soft and thoughtful poet by day and a sado masochist by night whom she meets in Kashmir. Next comes Nicolai Vronsky (Aleksandr Dyachenko) a Russian Spy who has a wife and kids in Russia, who is bitten by her pet snakes. The next one, Keemat Lal (Annu Kapoor) is someone Sussana marries just to avoid prison and then kills by a viagra overdose leading to a heart attack. She is the first one whom she had no emotional attachment to. After all these bad relationships she tries to commit suicide, but is saved by Dr. Modhusudhon Tarafdar (Naseeruddin Shah). She finds love again but is again disappointed as Modhuda tries to kill her in order to inherit her money. In a state of shock, she shoots him during a session of Russian roulette.

I will keep the suspence elements a secret, regarding her 7th husband and her death. They are not groundbreaking but, i don’t want to play spoil sport. The movie has an interesting plot but is greatly let down by its straight line characterisation of Sussana. She grows from a young girl to an old woman but for me there was nothing striking about her for even all these flawed men to marry her. The first three are still believable but the rest had to really blinded by her charisma to have married her inspite of knowing about her past. And sorry but Priyanka Chopra is just not charismatic enough. There is nothing striking about her character except maybe for the fact that she is a well bred girl. Among the men, Irrfan and Aleksandr are the only ones who make any impact on you. You look at them wooing Sussana and believe that she could fall for them inspite of her bad relationships. The rest are just a blur.

Vivaan Shah has a good screen presence. Playing a young boy who nurtures a secret crush on Sussana all his life, he is the only one who is sane enough to leave the mad world when it gets too much for him to bear. The servants have nothing much to do and commit murders at Sussana’s orders without a blink. Vishal Bhardwaj’s music and Gulzar’s lyrics breathe life into the movie but it is not enough. The backbone of the movie is Sussana and sadly Priyanka Chopra is just not good enough an actor to pull it off convincingly. Her scenes with Irrfan are just a testiment to the fact. He comfortable slips into the role of the romantic poet who has to beat up his wife in bed to get off, while Priyanka looks like a complete amature.

At the end of the day, it works because of the story. Vishal Bhardwaj presents a world so different, each frame so vivid that it manages to keep your attention. But there is lot left to be desired. You can watch it if you are a fan of Vishal’s cinema…. It’s not as good as any of his previous works but is an interesting joyride.