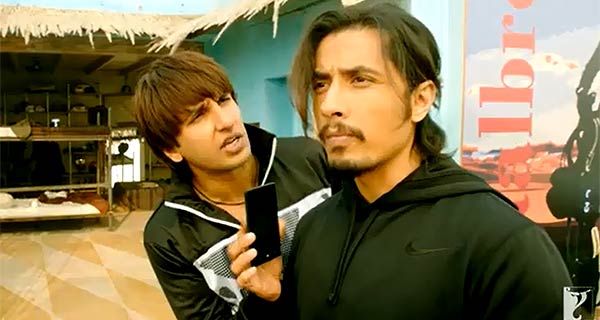 I don’t think i have been this supremely impressed by an actor and so immensely depressed by a film in a very long time. If it were not for the extreme efforts of Ranveer Singh, I would have just bestowed the film with no stars and be done with it. He of course has not much of a role to dig his nails into. He entertains like a good Bollywood actor can, despite limitations. He sings, dances, cries, laughs and uses every possible resource of talent to make Dev, the name of his character the only watchable and enjoyable thing about this horrific Sajidkhan of films. As you have seen, i am using the name of a very popular director as a synonym for the word – Ghastly.
What can you say about a film that is so confused from begin to end that the audience begins to think that maybe, Dhoom-3 was not that bad after all? A film so ridiculous that it makes Shaad Ali’s own, Jhoom Barabar Jhoom, feel like a masterpiece in retrospect. A film so devoid of soul, that i am wondering if i had more fun watching Race and Hum Saath Saath Hain? And so immensely reductive of its brilliant cast, that it leaves Tashan behind.
Why or why was the terribly frightening character of Bhaiyaji dancing in the film? Is it because it was played by Govinda? If so, then by the same logic if the character was played by Sunny Deol, Bhaiyaji would be lifting a hand-pump from the ground and killing 100 people with it? Right?
The songs are unnecessary but also misplaced. I would think that having seen insane number of Hindi films i wouldn’t be surprised if a screen cuts into a song in the middle of a scene, but no, i was wrong. We can always make Parineeti Chopra in a red backless Egyptian gown suddenly appear under a waterfall and tear apart Ranveer Singh’s shirt just a second after they decide to get married on top a Qutab Minar!
It is a film where the director has finally done it all by using the talented Parineeti Chopra as an over glamourised sex object ready for product placement in the soap, shampoo and face wash market. As to why is she, the rehabilitator of criminals, constantly hanging in discs and an insanely big swimming pool and in costumes which would suit a teenage barbie doll more than a human is beyond me. It is also beyond me to understand the need to cookie cut the actress into a ‘look at me, i’m so hot’ image more synonyms with her cousin, given that she already has her own brand of beauty which is greatly appreciated by many. Does an actor really have to be in a swimsuits unnecessarily, ride a Bullet in a micro-mini and a crop top (I don’t even know how) and wear barely there cholis to be acceptable for the people? Because people have moved on but it seems that some directors are still stuck in another time-zone.
I do not even know what genre of films it belongs to. Was it a comedy? I don’t know. A drama? An action film? A musical? I have no idea. Does Shaad Ali know? If so, please someone tell me and relieve me of this confusion.
Share karo yaar... tumhe filmon ki kasam