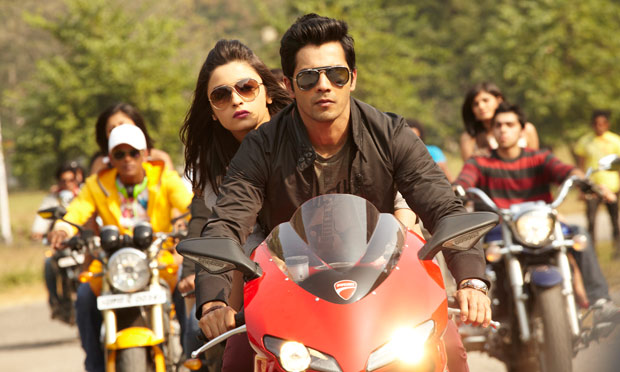 The first thing I am really thankful about is that my good sense prevailed and that this film did not even turn out to be as entertaining as ‘Kabhi Alvida na Kehna’, one of the least entertaining Karan Johar films. While I have never been a fan of KJo’s cinema I have always appreciated his keen knowledge of packaging a couple of mildly entertaining scenes with some good songs and melodrama to produce a hit film. With his new film ‘Student of the Year’ I expected nothing in that regard. The first trailer of the film was so boring that I could not watch the entire thing, and the film is no different. This is definitely the ‘Film of the year’ in the BRAIN-DAMAGE department.
A somewhat Hogwarts type institution but only more unbelievable looking than the school of magic, this place is for only Tata walas and Bata walas, those symbolising the divide between the rich and poor kids. Unfortunately, it shows almost nowhere with our bechara gareeb hero Abhimanyu Singh (Siddharth Malhotra) sporting Ray-Bans while he begs for money for a science project. The rich kid Rohan Nanda (Varun Dhawan) on the other hand has so much teenage angst that he could only want to become a musician. Otherwise, the cliché won’t be complete! Of course there is also a girl in the midst of all this. Shanaya Singhania (Alia Bhatt), whose toned body and fabulous clothes get sidetracked by the boy’s over toned, over exposed bodies and the torn up clothes that force us to stare into their shaved chests throughout the film’s length.
The story is about a lot of things, one of them being this irrelevant competition called ‘Student of the year’ which encompasses IQ, puzzle solving, dancing, dating, swimming, cycling and running. More like superhuman of the year! Even superman could not have done it all. This competition is conducted by Yoginder Vasisht (Rishi Kapoor), who is one actor I feel really bad about in this film. Reduced to a shitty caricature of a lonely repressed homosexual dean, he is not even able to do that funnily enough (see Jim Rash as Dean Craig Pelton in ‘Community’) and instead looks completely uncomfortable and awkward. Ronit Roy as sports coach is wasted and so is every other actor who knows how to act like Ram Kapoor, Farida Jalal and Manjot Singh.
Personally I was more shocked than disgusted by the film’s content. Given the bright pastel coloured fashionable clothes and beautiful locations, there was not much that KJo had to do to pull of this inane film but he fails, in my opinion because he was staring too much at the leading men’s behinds. [NOTE: Beach sequences of Malhotra and Dhawan in insanely small swimsuits.] Give the boys something to wear Mr Director. It might be fun for you but I cannot say the same for the audience.
One of the primary problems of the film is not the story but the combination of ridiculous dialogue, really juvenile cinematography and shitty music, both in terms of songs and background score. Looking at only these three the film looks as has being produced by college kids with bad taste. Yes, we all know that the hero and heroine have to sing a song in the snow at the backdrop of the beautiful mountains. So we have the scenic mountains, the white snow and even a beautiful teal coloured fence in the frame but somehow it does not come together to create magic. Instead it reminds me of curdled mayonnaise, when the oil and egg yolk just don’t emulsify because the cook screwed up badly.

This is exactly what ‘Student of the Year’ is – Curdled Mayonnaise. If you don’t know what that is, all you need to know is that it’s a lump of raw egg in a bowl of oil.
Share karo yaar... tumhe filmon ki kasam