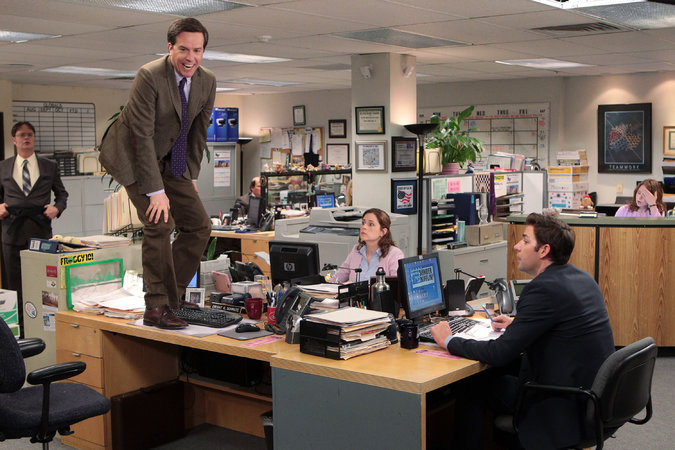 I was going to write this at the end of Season 5 but could not control my urge to finish the next two seasons too. And while my reaction to the 7th season was a little different to the rest, the series still has done enough to deserve a glowing writeup. The Office (U.S. TV series), is one of those few series which make me laugh out loud. Like literally LOL. I would even go as far as saying that sometimes I could be found rolling on the ground laughing out loud (ROGLOL).

The character in the series vary from Sane, Smart, Idiotic, Slow and Dumb. And for those who don’t know anything about the series, a bit of background will help:

Starts out as a temporary worker. Has many positions over different seasons.
Lazy. Lacks focus. Dumb.

A Cornell alumnus. Somewhat of a butt-kisser. Singer. Not too good at sales. Dumb.

An uptight Christian who wishes to keep things orderly. Addicted to Cats. Weird.
A clueless, overweight man who revels in juvenile humour and M&Ms. Slow.

Often a favorite target for Michael’s off-color comments about his sexuality. Smart.
Doesn’t like to take part in Michael’s time wasting meetings. Smart

Over talkative customer service representative. Indian. Addicted to chatting and shopping. Dumb.
Warehouse supervisor gains prominence throughout the run of the show. Smart.

Introduced as Pam’s replacement at the reception desk at the end of season 5. Low IQ. Slow.
Human resources representative. Micheal hates him. Smart. 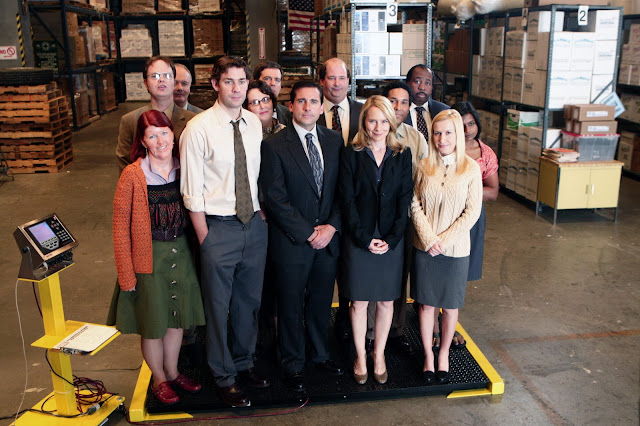 One of the best things about this series is the manner in which it makes a complete mockery of an office space. Growing up I thought that it was only the public offices which was full of loopholes and filled with people who have have 3 hour lunch breaks and a 9-5 shifts. Unfortunately it is not true. The present system is the one which has no shift. So while you come on time, you only leave after the boss leaves. It could be 5, 6, 7 and even 8. You just sit in your chair and pray that it is 6 on most days and 4 on some special occasions.
Personal stuff aside, what I love about ‘The Office’ is the characters.  I have given a full length detail about almost all of them but that done, I have to describe what they do for the series. The series is shot in a documentary style, so there is no background music, studio audience clapping or laughter. Instead you have a first hand account of the characters doings and also them speaking to the camera (or you) about themselves. The format is one of the best things about the series and keeps it fresh and edgy. And even though the stories are fictional, they feel more realistic this way.
Given the IQs and EQs of most of the characters (specified earlier), the office makes for a very interesting working environment for everyone. While most of the smart or sane ones try to keep busy doing work, others mostly led by Micheal are always up to something that can characterised as destructive/stupid/obnoxious. It is safe to say that no work is ever done. At least most of the time. And while the series is a slightly exaggeration of real life, the characters are spot on.
Micheal is almost indescribable. That he is a dork and stupid goes without saying. But then there are moments that he does surprises you with some emotional insight. His stupidity is something that I constantly question but despite that, he is one of the most consistent characters in the show and Steve Carell just nails him down. Carell left the series after the 7th season and Micheal Scott will always be one character which the series will miss. One of my favourite moments on the series is Micheal’s movie ‘Threat Level Midnight’ where he plays a spy. The dance sequence in the bar is outrageous! 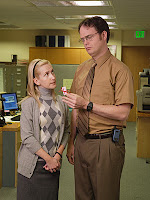 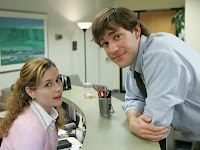 Yes there is romance also. There is the ‘by the book’ couple Jim and Pam. Three seasons of looking into each others eyes and sharing a ‘friendship’ later they were finally together. They are what you call the ‘Cute’ couple of the office which adds a bit of sane romance to the storyline. But nonetheless, for me, the three seasons passed in the anticipation of them getting together. What is it about unfulfilled love stories? Another twisted love story is the one between Angela and Dwight. There is nothing more I can write about it other than the fact that it is plain twisted. What more could you imagine out of the two people who have a contract to produce a baby for professional perks! There are many other affair in the office, the last one being the one Micheal had with with the HR profesional Holly, who he eventually settles with (I assume). 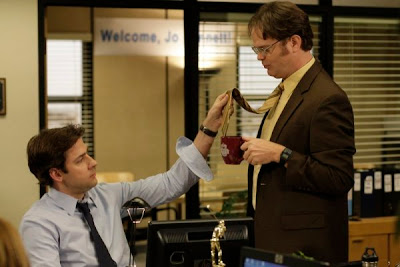 While Jim’s chemistry with Pam is not to be missed, there is another man in his life. Dwight Schrute. The maniacal menacing monster is someone who takes almost as much time in Jim’s everyday life and mind than anything else. Even after having a baby. The relationship they share is again something that can’t be described. While Jim is evidently the smarted one, often outsmarting Dwight in pranks, there are moments when Dwight truly outdo’s him. The snowball match between him and Jim is one of the few episodes which had Jim completely shaken up and running for cover. It was the very few times you would see Jim in such a situation in all seven seasons.

Some of my favourite characters from the series are the ones on the sidelines. They play their own role in making the place weird and real. Kelly Kapoor is one of them. She is irritating. Period. Her messed up relationship with Ryan is one of the most entertaining things about the show, not to mention Ryan himself. The guys goes from being a temp, to Micheal’s boss, to a sales guy and back to a temp and his journey in the series is one of those things that was just so stupid that I could seriously imagine it happening in a real office. Kevin is this giant monster who smiles dementedly and runs in the direction of food.
Most of the characters of ‘The Office’ remain consistent through the various series, unlike most other sitcoms where there is some emotional growth. And this is the differentiating factors. The changes that each season sees are because of change in management, bosses, sub-bosses, change in positions and mostly managerial bullshit. Pam and Jim are the only once who some change in their personal life (marriage and baby) so you see them quite different from the couple they were in the first 3 seasons. The most entertaining aspects of the series is kind of stuff that the writers come up with. The office parties, politics over imaginary positions, boredom and not to mention ‘Corporate’ running the rules over everyone’s head. If you have ever worked in the regional branch of a company, you would know what it is all about.
Watch it for the funny quotient. It will make you LOL.
Share karo yaar... tumhe filmon ki kasam