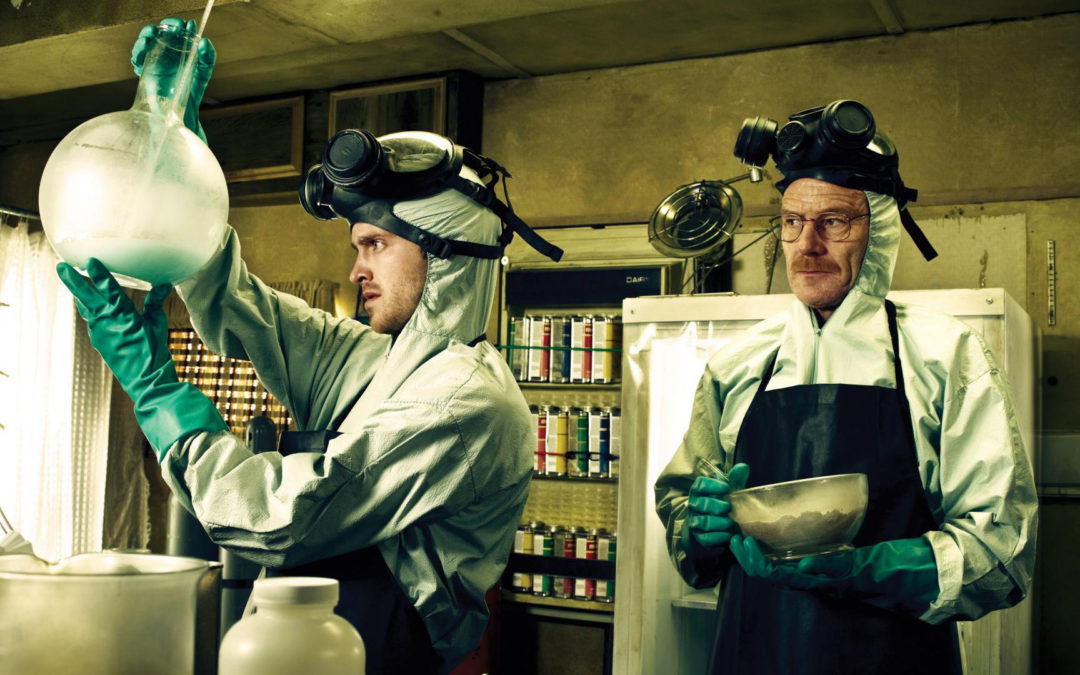 There are few individuals whose opinion I take seriously when it comes to movies and television. And I am thankful that this particular person persuaded me to watch this series. After a back to back session of the five seasons of ‘Breaking Bad’, I can safely say that I have not come across something as entertaining and moving in a very long time. And it is not just the compelling story which gets your attention but it is the immensely strong characters that make the story convincing.

After having seen it, I feel there is no straight way to explain the storyline. What I was told was the Wikipedia version which is as follows: Set and produced in Albuquerque, New Mexico, Breaking Bad is the story of Walter White, a struggling high school chemistry teacher who is diagnosed with advanced lung cancer at the beginning of the series. He turns to a life of crime, producing and selling methamphetamine with a former student, Jesse Pinkman, with the aim of securing his family’s financial future before he dies.
While this explanation covers most of the ground what it does not speak is just about how insightful the story is into the characters involved. You think you know them but you don’t. And this is not one of those Desperate Housewife ‘OMG’ situations where the neighbour turns out to be a murderer. Here you see a complete transformation which is convincing and believable. And for a change, almost everyone involved have an integral role to play.

Here is a list of the main protagonists:
A genius Chemistry teacher stuck in an average job, White takes a decision to use his expertise to produce the addictive drug methamphetamine (also called Meth). Diagnosed with lung cancer the first season sees him struggle with his family to accept treatment and metamorphosize into Heisenberg, a street name he uses in the drug world.
Jesse Pinkman is a drug addict running a small time meth operation. A former student he is approached by White to be partners with him. The work is cut out as production (White’s territory) and distribution (Pinkman’s work).

Skyler is Walter’s wife. Pregnant with their child, she is left to pick up the pieces of the family with Walter’s new unknown life.

Marie is Skyler sister. She is also married to Hank Schrader who is part of the DEA (Drug Enforcement Agency).

Hank is White’s Brother-in-law. His character starts out slow but soon he starts following Heisenberg’s trail and builds a case about the new meth being produced and distributed. 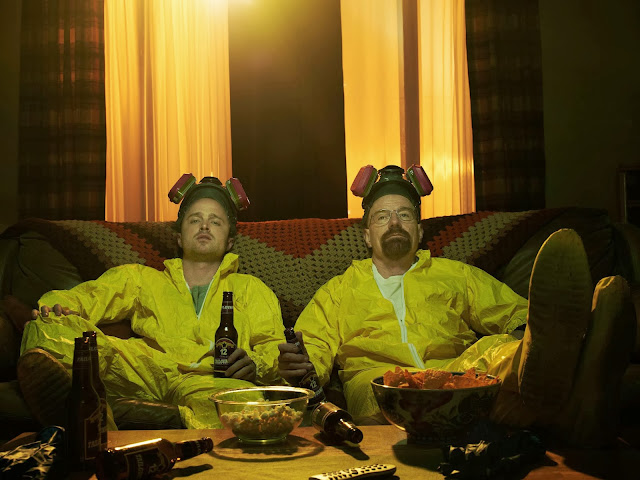 My personal favourite thing about the series is the wonderful mix of adrenaline pumping action and emotionally charged drama it has. And both remain equally important throughout. Walter starts out to make a lot of money but his expertise is never turned into a Rainman kind of thing. Instead we see a complete new side to him, when he deals with crime. He is selfish, cunning and heartless. Though his character uses the cancer and the economic condition as excuses to justify his actions to himself, as the series proceeds it is becomes clear that he enjoys the adrenaline pumping action that the world of crime provides. He takes to it with ease, showing signs of a a man who has been waiting for something like this to happen. Walter’s ego is one the easily recognisable traits in him. It gets bigger with every success and sometimes in a manner which does him more harm than good, but then the intricacies of his character is one of the most interesting things about the series. You would want to believe, that he is just a man trying to provide for his family but unfortunately it is Jesse who is in reality the guy who wants to do some good but is lost. While Walter doesn’t blink twice before shooting a bullet (probably the confidence comes from the eventual expectation of death), Jesse is a clean soul. His capacity to love and connect is much more than anyone else in the entire series. One of the most powerful and defining scenes for me in the series is the point when Jesse shoots someone. Tears in his eyes, he shoots only because he knows it is necessary for his life.
There are two scenes in the last episode of Breaking Bad that defined Walter. The one where he accepts to Skyler that he actions were for his self fulfillment and not for his family and when he asks Jesse to shoot him, because he has no will to live anymore. And though White did go after redeeming himself a bit by providing for his family and freeing Jesse, he will always remains the insanely dangerous Heisenberg for me, whose moral compass sometimes reminds me of the entire humanity and our desperate attempts to find excuses for our innermost desires, especially when they are bad.
Jesse and Walter together make for an explosive combo (If one of them would have been a woman they would be married). But another character that keeps Walter on the edge is his wife Skyler. Traumatised by his husband’s life threatening disease and an unexpected pregnancy, not to mention a less than favourable economic condition, she is a bomb waiting to explode. A season full of lies and deceit from her husband, and she does explode. And it is pure joy watching her turn from a loving wife to a heartless woman who wants nothing to do with her husband. It is much later that Skyler actually finds about what her husband is upto and one of the most brilliant scenes is when she sleeps with her boss just to enrage Walter. No…the brilliance shines though when she announces it to him while he prepares dinner. 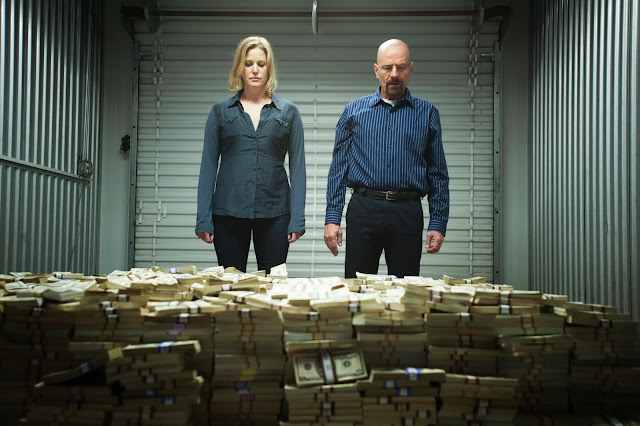 While the entire world is quite obsessed with Walter White and his alter ego Heisenberg I have for quite some time had this desperately soft spot for his two better halves, Skyler White and Jesse Pinkman, people who he most affects with his actions. As a viewer I enjoyed watching both Skyler and Jesse the most in the first 4 seasons where they struggled with White’s ambitions and was recently quite surprised to find that viewers had pretty strong negative feelings for Skyler’s character. Personally, I found her various outbreaks to be the most entertaining and shell shocking moments present on the series, because her reaction to Walt’s alternate life was a unstable mix of horror, anger, love and fear, all of which she went through alone, mostly misunderstood. Sometimes I almost wished that Jesse and Skyler could be friends because they could empathize with each other about something that no one else possibly could – Unflinching loyalty towards Walt despite his obvious demons. One of the most hilarious scenes in the series was the cold dinner table conversation between Jesse, Skyler and Walt where Jesse desperately tries to break the tension in the room but is unable to ever rise to the status of a human being in Skyler’s eyes because of his association with Walt. Both of them, are like the two mistresses of a single man, both wronged, both angry but both in love. 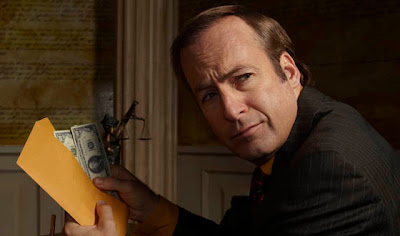 As is the case with any series, there are many new faces that show up in the five seasons. Some of them have been the drug lords in charge of distribution of the meth that Jesse and Walter start producing in large quantities. Each of them couldn’t be more different from each other but the guy who makes the most impact is Saul Goodman played by Bob Odenkirk. Saul plays a dirty lawyer who represents the scumbags of the earth and thus also Jesse and Walter. One of the first people that they confide in about their secrets, he is a surprise element in this twisted tale. The only person both Jesse and Walter can trust (Through attorney-client privilege, of all things), Saul becomes a regular part of the series, the go to guy whenever someone needs a bit of help. The fact that he stands by his privilege, even when threatened by one of his own clients is one of the defining moments in his character. In that moment, Saul turns more than just a dirty lawyer who would do anything for a cut in the money.
The series has many other characters, multiple storylines and strong dialogues. One of the stand-out aspects of the series is the use of music in the scenes to bring an element that is often missing in dramas like these. Also hard to miss is the dark humour that plays out and the incredible acting prowess of the cast, bringing out the characters to life. Though it is not difficult to attach a particular character to an actor in the case of a sitcom or a tv series, here the same does not happen due to repeated viewings. These actors really know their stuff when they speak the dialogues. It will be hard not to be moved by the sheer power of their talent, not to mention the vision of Vince Gilligan, the creator of the series.
It would be safe to assume that I love what I have seen. I would bet you any amount of money that you will not be able to stop after the first three episodes. For those really interested, you can contact me for the 5 seasons.
Share karo yaar... tumhe filmon ki kasam