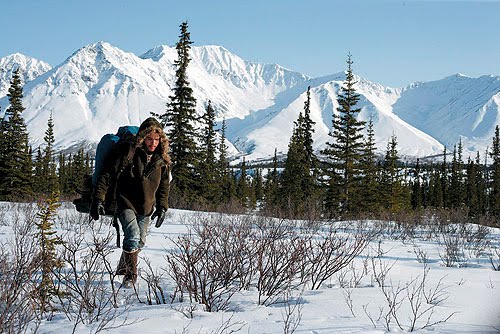 As you watch Christopher McCandless roam through America and beyond living like all of us wished we did (only with the small addition of hotel rooms at night) you realise what we give up when we forget about the existence of the world as it is – bare, beautiful and with so much to offer. But it’s just not a back packing trip but an emotional journey of a family, a bond between siblings as a result of shared tragedy. In this, movie the story is told on two tracks. One is Chris moving and experiencing new things. The other is the integral one. The one that answers the question going through the audience’s head. Why? This is narrated by his sister who lets us into their lives and Chris’s mind. She speaks and is confident of her brother’s reasons and yet a little hurt at the loss of contact. You see her witness the entire episode with a stranger’s coolness and yet filled with anxiety. While her parents are shattered because Chris doesn’t inform anyone about his plans. His sister knows and remains silent. She is the loyal confidant who remains behind.

Even unknowingly sometimes your family becomes an integral part of who you are. Even when you struggle your entire life to not be anything like them, just not being them becomes a part of you. And shapes your life. So even as Chris is a free spirit, and his parents a testament of lies and unhappiness.. You can’t help but see them engraved so deep within his soul that his struggle doesn’t seem baggage free. It’s not just the free spirit within him that drives him but also the angry boy who wants to in a way punish them. These are the two levels that the story works on and if you don’t pay attention you can easily miss it out.

Into the wild is a very raw movie. Full of latent human emotion that shape our lives without even coming to the surface. This movie with move you at different levels. And while you’d think the Chris in the guy who knows it all – as he travels from place to place working his way through America to go to Alaska, you also see him vulnerable towards the end. When he is weak and alone, and maybe realised that you have to co-exist with humans and joys are worth something only if they are shared. This movie has no heroes’ or villains. It has no right or wrong. It’s just a window into the life that we have long forgotten about and a reminder that sometimes you need to look deep within to find joy.

The movie stars Emile Hirsch, Marcia Gay Harden, Jena Malone and William Hurt and all of them perform well but the movie belongs to Sean Penn who tells a story as complicated  as this brilliantly.