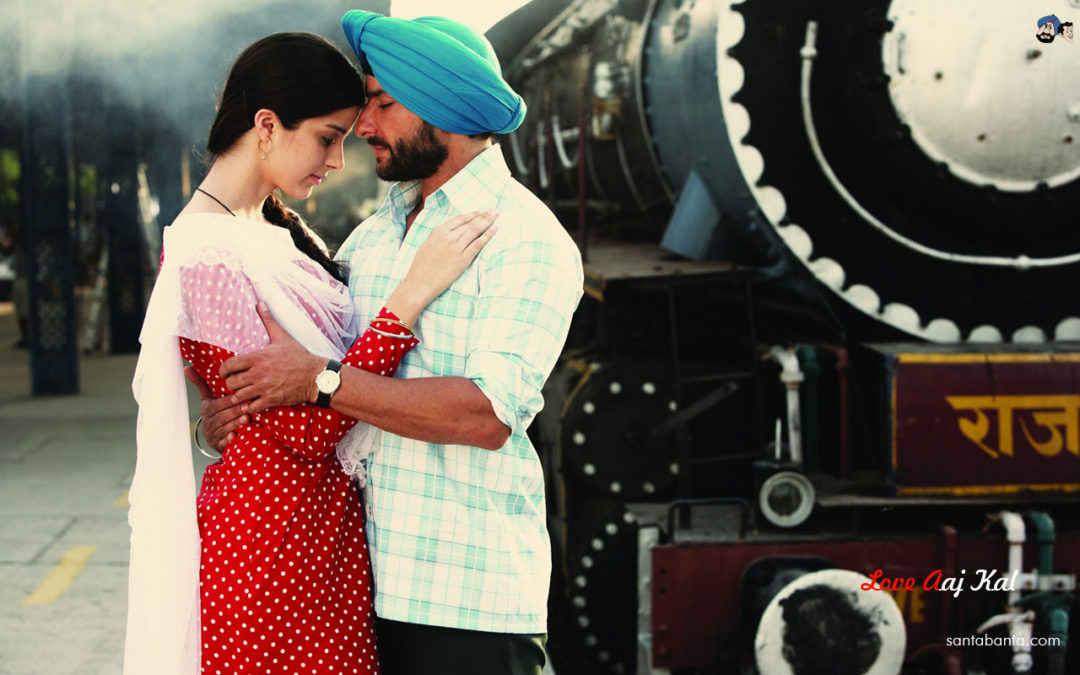 Imtiaz Ali till now has stuck to the theme of confusions of love in all his movies executing them in impressive fashion. Be it the ‘whom to marry’ theme in Socha na tha, or running after the wrong guy while you have the right one in hand in Jab we met. Love aaj kal, like its predecessors, has its heart in place. Almost.It’s a simple story of two people who are perfect for each other but have their ambitions in different countries and thus decide to separate. They think that if they act practically their lives would be simpler and without complications but forget that simplicity and love don’t always go hand in hand. This on the other hand is the theme of the love story between Veer Singh (Rishi Kapoor/Saif Ali Khan) and Harleen Kaur (Giselle Monteiro). The movie is a parallelism drawn between the love stories of the two couples in different times and their approach in dealing with the difficulties they faced.

The movie runs keeping the basic fact in consideration that Meera (Deepika Padukone) and Jai (Saif Ali Khan)are a great couple. They are made for each other and are just confused and clueless in what all they want in life and everything they are willing to give up for it. And the good part is there is no problem with the story. The problem is that, I during the length of the movie never felt for them. I don’t feel their heartache or their confusion because I never get to see the reason for it. The entire duration of the relationship is shown in a briefly in 2 minutes where we barely get to see the attraction, the chemistry and the love leading to the coming heart ache. The parallel story of Veer Singh though cliché is refreshing to watch. Maybe because of the simplicity of the plot and the clarity of thought of the main characters. Giselle hardly has any dialogues, which is a blessing of sorts. Saif Ali Khan is so much more adorable as the naïve Sardar who is willing to go to any length to be with the love of his life.

Saif Ali Khan, since his urban male confused act in DCH and many such in future (Kal ho na ho, Hum tum, Saalam Namaste) has managed to make a stereotype of the urban male which no director seems to change while casting him. His character is of a 26-27 year old while he very conveniently looks like a 35 year old which makes it even harder to accept the fact that he is so confused in life. Sure, guys wouldn’t actually realise something that already exists in their head till you don’t shock their systems. But please, choose someone who looks the age to play the guy convincingly. Somehow, Saif Ali Khan is not able to bring about the complications of his character. He is just kept busy trying to look cool and suddenly is devastated in the last few frames of the movie. Deepika’s character is a little better sketched out. She is another confused female who has her goals in place and the will to move on in life and act practically. She just doesn’t have the heart. Somewhere down the line she understands the mess she is in…but just doesn’t have the guts to acknowledge it. She though has her expressions, somewhat in place, loses it as soon as she opens her mouth. She desperately needs to do something about her dialect and dialogue delivery. She looks great but there is more that is expected, especially if you have been given a good character to bring to life.

The music by Pritam is great and the lyrics by Irshad Kamil are brilliant, bringing out joy, sadness and complications associated with love. The direction is a little patchy and the sub plots with the other love interest Vikram (Rahul Khanna) and Jo don’t seem like anything more than distractions. It is almost sad to see a good story go to waste because of the invisible chemistry between the lead cast. Watch it only if your idea of a good time is listening to Saif Ali Khan blabbering on for eternity and Deepika stare at him while her does so. As I said, the movie has its heart in place but it just doesn’t follow through.