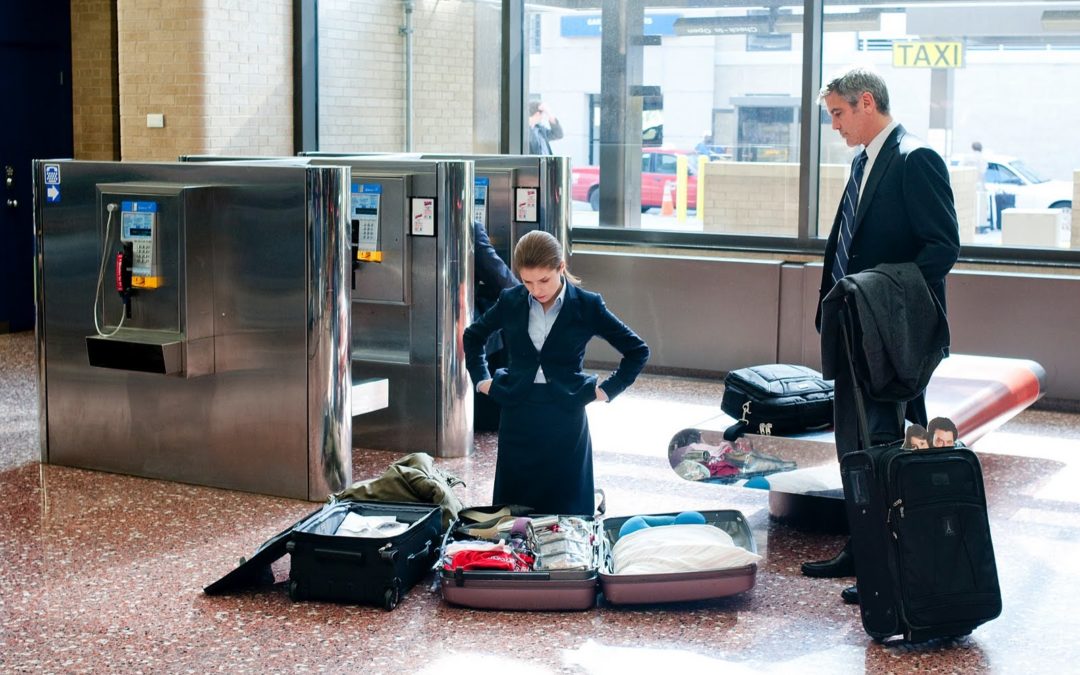 Ryan Bingham (George Clooney) is a man who travels all through the year firing people for living. It’s a hard business, looking at people’s faces day in and day out, telling them that they won’t be getting their next pay check. But he does it with ease, a certain charm if I may add. His world is the airport lobby and hotel rooms, the free drinks and the loyalty cards in his name. He dreams of the day that he would have 10 million miles and receiving gold plated card from American Airlines. He has never been married, has almost no connection with his family hardly caring about the fact that his little sister is getting married, limiting his real relationships for the Hilton hotel, American airlines, Hertz car rental among other service providers. The first time you encounter Alex (Vera Farmiga) in the movie, at an airport, discussing being a frequent flyer with Ryan you feel as if you are encountering the meeting of soul mates. Two people who spend more time on the airport than in the comfort of their own homes and get turned on by the idea of loyalty cards and the number of miles covered by them.

Ryan’s lifestyle is threatened when a colleague Natalie (Anna Kendrick) introduces an idea of changing the entire system by video conferencing where the staff can just fire people in the comforts of their offices, reducing costs of the company. Ryan is not sold at the proposition believing what he does is far more personal and important than just saying three little words to people’s faces. He and Natalie embark on a training trip together where he trains her in everything; from the nitty gritty of travelling regularly to handling people while they are being fired.

In the end, Ryan’s system stays but he is left in this vacuum of sorts where it doesn’t matter anymore. The airport and hotels, the world that Ryan lived in, the special privileges and even his gold plated 10 miles card, sold as slick in the beginning all crashes down to the gooey fluffy stuff. It’s almost heartbreaking because even the audience doesn’t see it coming. We are so used to people getting together at the end of big romantic gestures, that we forget that relationships may not always be ready when you are. There is a scene in the movie when Alex tells Ryan that she is a grown up and that he can call her when he would like to see her, right after he finds out that she has a family. It’s almost cruel because that is the moment that Ryan’s world actually crashes down because someone who actually understood everything about it still took it to be a fairyland/dream world.

George Clooney plays the role of Ryan with charm and restraint. It doesn’t even feel as if he needed to act too much. Anna Kendrick puts in a great performance as Natalie, a woman, who is torn between her job and her natural instincts. She holds the screen to Clooney not for a bit looking like a sidekick or a second lead. And Vera Farmiga is absolutely stunning as Alex. She is charming yet sharp in her role as a person leading a double life. You don’t know whether to hate her or like her by the end of the movie.

The movie belongs to the actors as much to the director Jason Reitman. He makes the movie, slick, warm and edgy at the same time using a very relevant context to tell the story about relationships. There are many questions asked through this movie. The age old fight between human intelligence and technology and deciding as to where to draw the line. The value of life and what all it entails and the basic question about love and companionship. Whether it is meant for everyone or is it just some stuff being passed on to us from ages that we just can wash off our minds. It’s interesting because given the context of downsizing employees, in the interviews with them they always bring up their family, almost holding on to them, knowing that they would be there the next day. In other scenes the family becomes a liability that they have to provide for which makes being fired so much more difficult. It leaves the viewer in confusing situation like Ryan’s at the end. To decide which way he would rather go. To have the additional baggage of a family which would bring you down with responsibilities and complications or to have them as a support, someone to grow old with and come back home to.