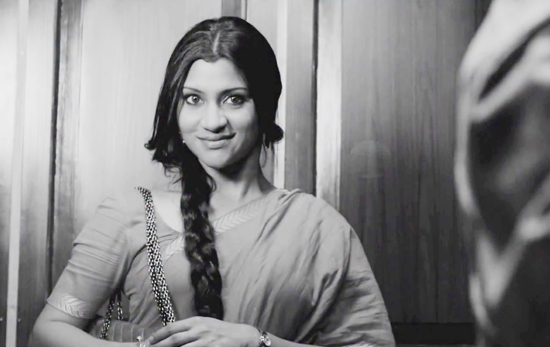 The End.
The end is what separates great films from the rest of the crop. Pick your favourite film and fast forward it to the finish and you would agree too. It is ‘the end’ that makes or breaks a film. Today we live in an age where the last 20 minutes of the film do not necessarily have to make sense. The motive of filmmakers is to keep the audience interested only for about 50-70% of the film’s length, hoping that the laughs or chills or drama in the first hour will do more than enough to fill their pockets. And it works too. But it is when the first hour of the film is really good that it hurts my feelings. ‘Ek Thi Daayan’ is a film that does this very thing.
Director Kannan Iyer, creates a wonderful world of mystery and chills inside the old Mumbai flat where the young Bobo lives with his sister Misha and father, played charmingly by Pawan Malhotra. It is this part of the film that entertains the most. There are no creaking doors but the drama is created between a lift and our mind. Is that a lizard or is it something else? Does the lift work or not work? Is Diana (Konkona Sen Sharma) a Daayan or just a creepy step-mom? And of course the final question of is it all real or just the mind playing tricks?
Vishesh Tiwari and Sara Arjun give a performance that makes this film. As the Young Bobo and his little sister Misha, they are deliver like stars, making me question as to why filmmakers insist that children’s films don’t make for a good watch. If anything, given the right context they can add meat to the performance especially when supported by a cast which can provide them the necessary friction. There are many examples in Hindi films themselves, some of the most obvious ones being Masoom, Mr India and Zakhm.
It is also here, in this part that we see Konkona Sen Sharma, finally give a performance worth raving after a long time. Sharma has long being doing part-percentage stereotyped roles in Bollywood, often oscillating between shy-intelligent woman and confident-intelligent woman roles, none of which actually use her acting prowess. Here, she plays a complicated role of a step-mother who is possibly a Daayan, something she does so brilliantly that I had visions of her scary eyes when I tried to sleep at night.
Of course, there is also Emraan Hashmi, Kalki Koechlin and Huma Qureshi in the film, mostly seen post interval. Hashmi is his usual self, delivering dialogues, romancing women and acting scared. He could very well have been in Razz 3, only in the company of a better cast. Despite him being the protagonist there is not enough meat in the role for him to do something outstanding with the character. The same is the case with Qureshi and Koechlin. They all are good but they don’t stand out. Rajatava Dutta as Dr. Ranjan Palit gives a few moments of entertainment as Bobo’s Psychiatrist.
The music by Vishal Bharadwaj, despite its merit, is a distraction in the film. The director Kannan Iyer has made an entertaining film with the story by Mukul Sharma and Vishal Bhardwaj but maybe the next time around he would want to create a product slightly more polished. As Bobo (Emraan Hashmi) steps out of the lift in the film’s climax, I could not ignore the creepy resemblance to ‘Rosemary’s Baby’. But the reason that it worked in Polanski’s classic was because the end did not last too long. Even if somewhat disappointing, it was kept short in the audience’s memory. But in Hindi horror cinema, somehow, filmmakers dwell on the crazy human vs Bhoot fight sequences for so long that the audience forgets everything good about the film by the last frame. The lady doth protest too much, youthinks? If I could only truly expect nothing from the filmmakers, I would have achieved Nirvana.
Share karo yaar... tumhe filmon ki kasam