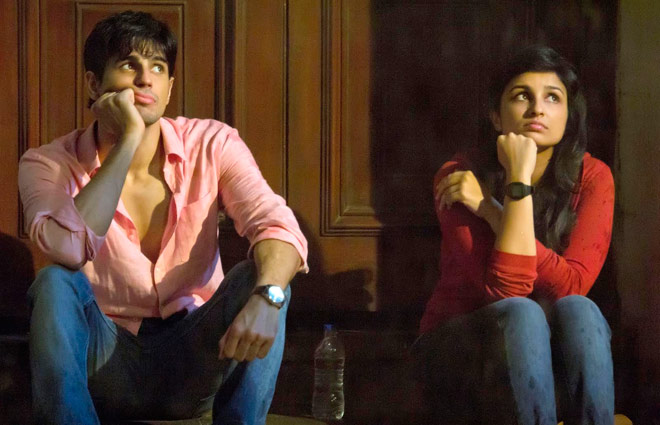 There is a huge possibility that since it had been such a long time (in my case that is more than a month) that i had seen a hindi film, that my mind just lapped up whatever it was offered but, god help me, I enjoyed watching the film ‘Hasee Toh Phasee’. The leads and their relationship was fresh and so was their approach to their characters. I for the life of me did not know what was going to happen in the film and the best of all, songs were almost non-existent except for one annoying wedding song. Who would have thought that after that debacle of a debut Siddarth Malhotra would actually return back on screen with a facial human emotions and a few more buttons in place. Parineeti Chopra is a talent, and i hope someone utilises her full capacity soon enough. But at least we get a glimpse here. And truthfully speaking, I think they look adorable together… awww. Maybe its Valentines’ day madness that made me like it!

There are of course large gaps in the script, which are pointless to talk about, because i think even the makers did not really want to address them. But the one thing i would really want to talk about is the publicity…. Why in the name of movie gods, the only thing about the film that i could see on my tv was that horrifyingly replaceable wedding song and a generic dance number when the film has a genuine solid comic and emotional track, which could be thrown at the audience to attract more into the theatres? I mean, the tv promos were so badly made that even i was not willing to watch ‘another shaadi romance movie’ until i was forced to due to intense boredom. Not to mention the completely stupid and meaningless title! How is that even relevant? Who came up with that title?

Anyway, truthfully speaking, this film does not have the groundbreaking spark of ‘BBB’ but it has something, dollops of genuine moments, good comedic attempts and characters who try to more than just what we expect our leading men and women to be. Just for the plain effort that someone did not give Parineeti Chopra’s character a makeover for her to get the guy, lets applaud the director.