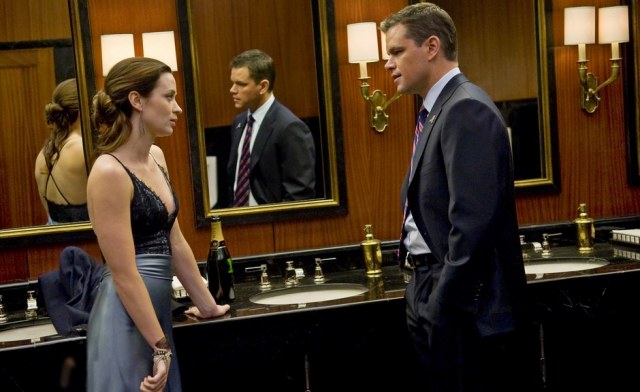 The thing about love stories is that it disinterests most men. It is assumed that the mushy stuff would have the women flocking up for moments of awww and sniff sniff. This is precisely the reason ‘The Adjustment Bureau’ is different. It mixes up two very different genres into an interesting tale about two people.
The movie is essentially a love story between David Norris (Matt Damon), a politician running for the United States Senate and Elise (Emily Blunt) a modern dancer. The slight twist to the entire tale is that while, David and Elise want to be together, it is not planned so for them and thus enter the ‘Adjustment team’ whose sole purpose is to make sure David never meets Elise again. The why and who are questions which have open ended answers and are best left to be seen on screen. But the thing you can’t ignore throughout the movie, and something which actually hold your attention is the crackling chemistry between the leads. You see them together only for brief number of scenes on screen, and in those few moments they make it believable that someone would ride on the same bus for 3 years continuously to have a chance at meeting the woman of your dreams again. Yes, it is highly romantic but the romance is not overplayed to an extent that it becomes boring.
Matt Damon and Emily Blunt are brilliant in their roles, especially when they are together. The light up the screen and while it has been a while that we have seen Damon do a romantic story, this just proves that it is a genre he could look into a few more times a year. Emily Blunt is a perfect partner and finally comes out from the shadows of the role she did in ‘Devil Wears Prada’ and presents herself as a leading lady. The screenplay is inspired from the short story ‘Adjustment Team’, by Philip K. Dick and is written by director George Nolfi himself. It was said that two separate endings were thought of for the film. But it is not the ending but the last few minutes that lead to the end that disappoint you. I can’t argue with it though because I would have to assist my argument with a possible alternate storyline. Anyway, it is that point of the movie when it loses some of the attention of the audience.
The movie is shot beautifully and nowhere does it seem that you are watching a love story/thriller/fantasy movie, which essentially what it is.
An enjoyable watch. Catch it for Damon and Blunt.
Share karo yaar... tumhe filmon ki kasam