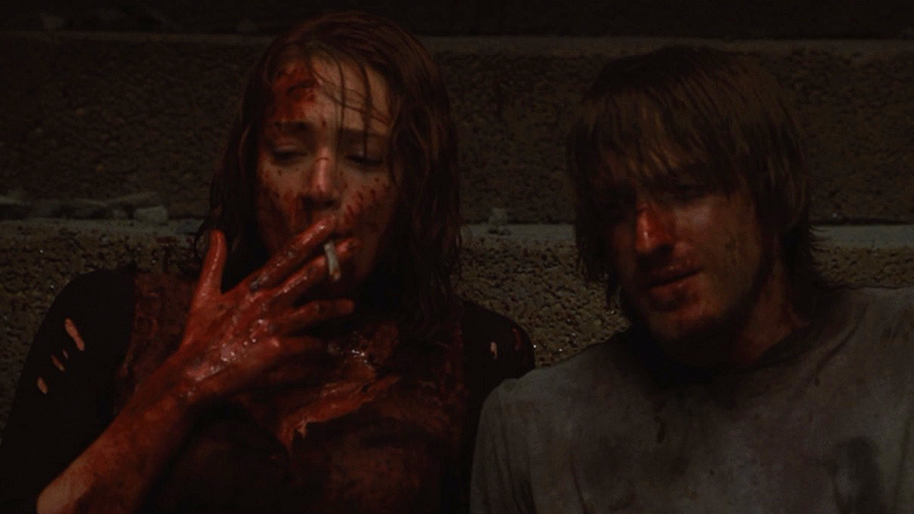 This is one of those movies that I quite not know what to think of. Throughout the movie, there is a very obvious effort from the side of the director Drew Goddard and writer Joss Whedon to keep the movie non-obvious. They do succeed to a certain extent. But is it enough? I don’t know.

The story follows five college students, Dana (Kristen Connolly), Curt (Chris Hemsworth), Jules (Anna Hutchison), Marty (Fran Kranz), and Holden (Jesse Williams) who drive out for a vacation to a remote cabin. At the same time you see a group of technicians (played by Richard Jenkins, Bradley Whitford and Amy Acker) keeping an eye on them with hidden cameras and manipulating their actions through the use of environmental controls and release of mood-altering drugs into the air.

The obvious hook for the audience is the incoming danger that these five face as they enter the creepy looking cabin. But what actually gets you more than hooked is the fact that this entire exercise is being watched and controlled by not one individual but many. The reason remains unknown till the very end but it becomes increasingly clear to us that the film is definitely not a ‘run and hide’. Not with the ease with which the first few kills occur. The film scores almost as much from the way it has been written as it does from the direction style. In the slasher/horror movie genre, you find yourself generally rooting for some character’s life, taking the predictable ‘who will live’ route. In this combination of thriller, horror and comedy, we don’t follow this routine path of goriness. Instead director Drew Goddard chooses not to dwell on the screams and instead transports us into an alternate world of insensitivity. It is a very clever technique and makes the film light on the eyes and yet gives you those jumpy moments that one expects from a horror film.

As far as the cast is concerned, there is nothing much to do for the leading five including the hunky Chris Hemsworth. They are just the prey, but each does add to the film by doing well in their characters. Noteworthy mention to Anna Hutchison for the grossest make-out session I have ever seen. On the other hand, character actors Richard Jenkins and Bradley Whitford find themselves providing the comic relief, playing the cool and calculating technicians. This provides a much needed balance to tone of the film, not letting it ever get one-dimensional.

I can’t still decide what to finally write about the movie overall. Will I watch it again? No. But would I have not watched it in the first place. No. ‘The Cabin by the Woods’, is a movie that you have to make your mind about yourself. Some might call it intelligent. Others pretentious. And some others smart but not smart enough. But till I decide what category I will finally put the film in, you should go catch it in the movie halls. Because whether it is smart or not but it is definitely an entertaining watch.