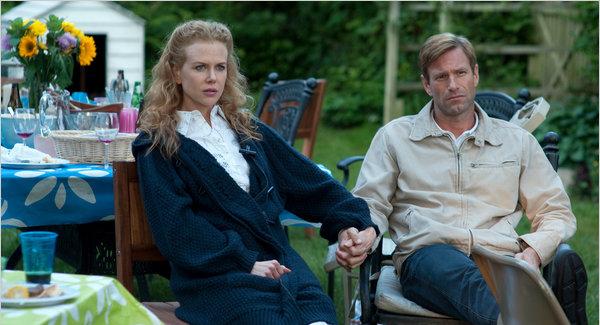 Death is not a pleasant experience. Especially if it unexpected. Rabbit Hole deals with this phenomenon while telling the story of a couple dealing with the death of their 4 year old son.
Becca (Nicole Kidman) and Howie (Aaron Echart) live a life of misery since the death of their son 8 months back in a freak road accident. While Howie accepts the grief and tries to get over it through conventional methods like group meetings, Becca prefers to keep a straight face even though her world has been shattered. Her days are filled with removing any signs of the fact that her son ever lived in the house. And it comes to a point that she wants to sell the house. Howie on the other hand is shattered but desperate to move on.
Rabbit Hole is a touching story. And while the focus is surely more on Becca and her inability to connect with anyone, the story does not ignore Howie. You see him trying out every possible way of getting rid of the sadness inside of him. From openly crying, to group therapy to smoking pot and even thinking of having an affair. Becca on the other hand looks like a shut case. She refuses to talk to anyone and the idea of God and fate is just bullshit to her. Some of the most touching scene of the movie are the ones between Becca and Jason (the kid who was driving the car which killed the boy). Both of them are very shut down and looking desperately to connect with anyone and get the grief out of their system. Becca, true to her controlled, correct behaviour never lets out her anger on the Jason. She never blames him but also never really does anything to make him feel less guilty. She is too broken down emotionally to do that for anyone else. But everyone still finds a way to hold on to something to move back to normalcy. At least for everyone else who watches. Like Becca’s mother tells her, “The pain doesn’t every go away. You can just learn to live with it.”
Nicole Kidman gives a restraint performance as Becca. Looking at her, you pray that she would cry and just let the pain out. But it is Aaron Echart who gives a performance that is full of emotion and has so many shades to it. The movie is an engaging watch and despite the depressing premise, you never feel like turning away from it. David Lindsay-Abaire, on whole play the movie is based, also does the screenplay for the movie. It is a very well written piece where the narration flows through the mouth of the various characters, which keeps the interest of the audience intact. Watch the movie, for all the human moments it has to offer.
Share karo yaar... tumhe filmon ki kasam