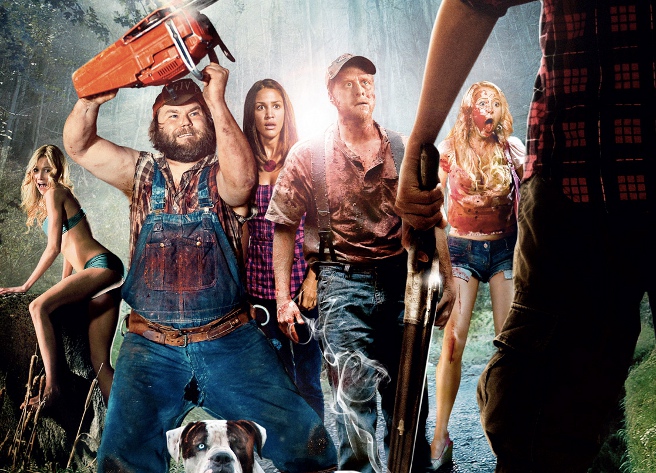 When I finally saw this movie I had forgotten why I had downloaded it or where is it that I had read about it. But 10 minutes into it and I knew that even if I can’t remember the reasons I can still trust my judgment. At least as far as movies are concerned. I am not a fan of slasher movies primarily because of the one-dimensional storyline but in ‘Tucker & Dale vs Evil’ you get a tasty dish of blood and gore, with a substantial serving of humour and a side dish of romance. Now that is a combination that makes for some great entertainment.

The movie shows a group of college students going camping in West Virginia. On their way they encounter Tucker (Alan Tudyk) and Dale (Tyler Labine), two well-meaning hillbillies who have just bought a run-down lakefront cabin in the middle of the woods. In the woods, Dale saves Allison (Katrina Bowden) after she hits her head and this leads to mayhem and confusion among the rest of the group.

What I really like about the movie was that the solid screenplay and how almost all actors are used up to bring out the confusion and humour in it. Tudyk and Labine as the main leads are obviously the centre of attention and they deliver as the sweet at heart but filthy to look campers. Labine’s scenes with Katrina Bowden are cute in a manner not many romances are and you find yourself rooting for them despite your better judgment. But it is Jesse Moss as Chad whose performance makes for the real comedy of the film. He has a very direct dark side but with subtle undertones depicting the loser in him. Watch him tell a scary story with an inhaler in hand and you would know what I am talking about. The other actors especially Chelan Simmons make for a good company as the blonde cheerleader running around in heels.

With this movie the writers Eli Craig and Morgan Jurgenson, work on the inherent bias that we all carry in our heads and their weapon of choice is chaos. It may sound too dark but director Eli Craig uses the actors, sequences and the visuals to create an environment of complete hilarity which both engages and shocks the viewer. Cinematographer David Geddes gives the film a look that is eerie almost all the time and yet never too gross to make you turn away your head. The chase sequences in the woods and almost all the death scenes are like a bolt of lightening where you don’t know what hit you till 2 minutes later.

Ignore the blood-shed. This is one of the funniest movies that I have come across in the last year.