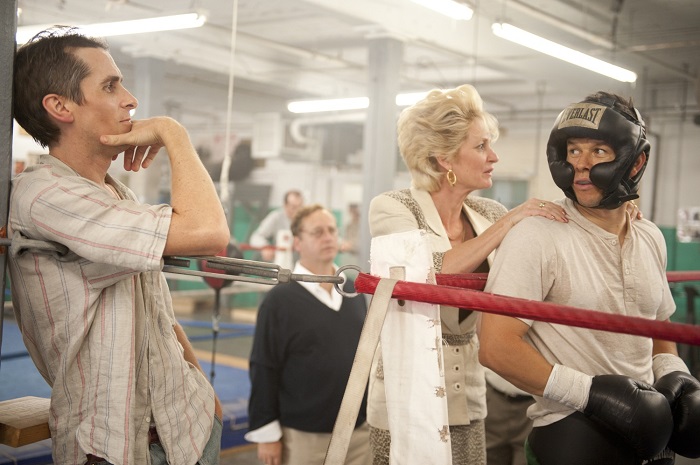 For me, as a viewer and thousands others, the thing that is most important in a movie is how entertaining it is. And while some movies compromise on the quality for entertainment, some others prefer ones which are both. And that is what makes good cinema.
The Fighter, which is inspired from the true life story of two brothers Micky Ward (Mark Wahlberg) and his older half-brother Dicky Eklund (Christian Bale) and their struggles. While the movie is a sports film, which revolves around boxing, I would be lying if I say that’s all it is. At its core, it is a family drama which is interwoven so well with the fights that it never bores you for a minute.
Mickey Ward is a professional boxer who is coached by his crack addicted, former boxer brother Dicky. If that is not enough, he is manager by his hot headed, protective mother Alice (Mellisa Leo) and surrounded by a family of 7 sisters, one daughter and an ex-wife. The dad is slightly sane but when you have a family full of crazy, you can’t do much by yourself. The story, through many twists and turns leads to a once in a lifetime opportunity for Mickey to earn a shot at the welterweight title. Charlene Fleming (Amy Adams) is Mickey’s love interest who helps him get his life together and start fighting again.
The movie has a stellar cast. Mark Walhberg plays his character with such quiet endurance, which Micky must have had to take his family. You see the pain in his eyes, when he sees his brother suffering and also seeing his life passing away in front of him. Amy Adams plays her role as a new girlfriend dealing with a crazy family to perfection. The scene where she gets into a physical fight with Micky’s sisters while he is explaining his point to his mother is priceless.
But the two gems in the movie are without doubt Christian Bale and Mellisa Leo.Bale, breathes life into the character of Dicky, making him crazy, lovable and completely unnerving at different times. Leo is pure joy to watch. She is this possessed mother who can’t see beyond her family, however dysfunctional they might be. Her strong and over the top, performance forms the back bone of this drama.
The fights in the movie have been kept succinct and precise. They grab your attention and keep you occupied till the end. But at the end of the day….it is a story about a family. And it excels in telling that story with full honesty without making it boring or drab.
Scott Silver, Paul Tamasy and Eric Johnson have taken this story and brought it to life on paper and director David O. Russell, has done full justice to it. Go catch the movie. You will not come out disappointed.
Share karo yaar... tumhe filmon ki kasam