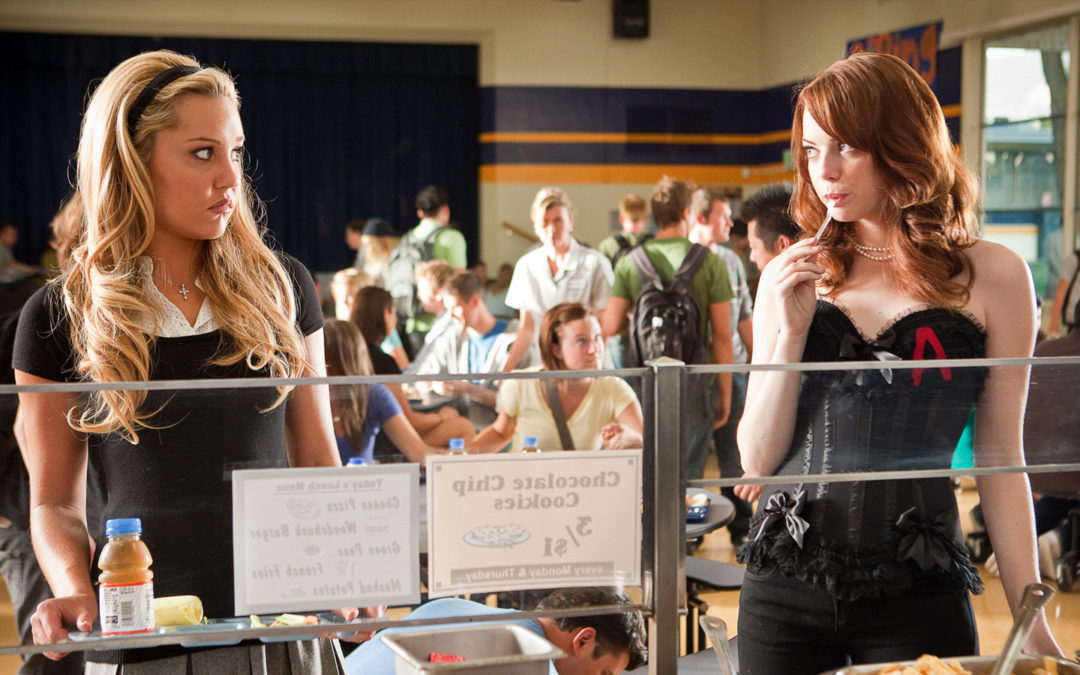 I am not sure where I heard about this movie, but I am glad I did. This is what I needed to make yesterday morning seem a little brighter.
The story is essentially about rumours and a extremely funny and true taken on the human society, taken through a small sample of high school going teenagers in Ojai. The movie has Emma Stone in the main lead as Olive, a smart and confident teenager who like most people at that age are dreaming of love and dating. Unfortunately her life takes a twist for the worse when a casual lie told to a friend, mountains into a ginamorous tornado which engulfs everyone in the school with Olive in the centre. What is hilarious is the way something as simple as lying about her virginity turns Olive into a school-going hooker who accepts gift certificates and even non refundable movie tickets as payment.
Emma Stone excels in her role as Olive. And I was so relieved to see a normal characterization of a sane headed teenager (an not because she has body fat) Stone plays the role with chutzpah and charm. A smart talking girl, her performance never isolates the audience from her emotions and that is the high pointof the movie. I also have to add a a special mention to the performance of Stanley Tucci and Patricia Clarkson who play Olive’s parents, Dill and Rosemary. To say that they are hilarious would be an understatement. These most arresting of scenes are the ones that Olive shares with them. The bohemian pair is sarcastic, charming and so delightful that you wish that you were born into their house.
Amanda Bynes, plays Marianne, a . . . what is the polite way to say it… a Jesus freak (in Lisa Kudrow’s words). The pious religious girl who considers it God’s will if her 22 year old boyfriend can’t pass high school is just plain hilarious. Some of the other members of the cast are Thomas Haden Church as Mr. Griffith, Lisa Kudrow as Mrs. Griffith and Olive’s School counselor and Dan Byrd as Brandon, Olive’s first customer.
The movie has all the right elements of a high school drama. And add to the mix a pretend sex scene, Demi Moore’s horrifying remake of ‘The Scarlet Letter’, a Chlamydia attack and some plain ol love and you have a high school rom com which is easy on the eyes, entertaining and yet not lacking in character. The saviour of the downtrodden had never been so entertaining!
Share karo yaar... tumhe filmon ki kasam