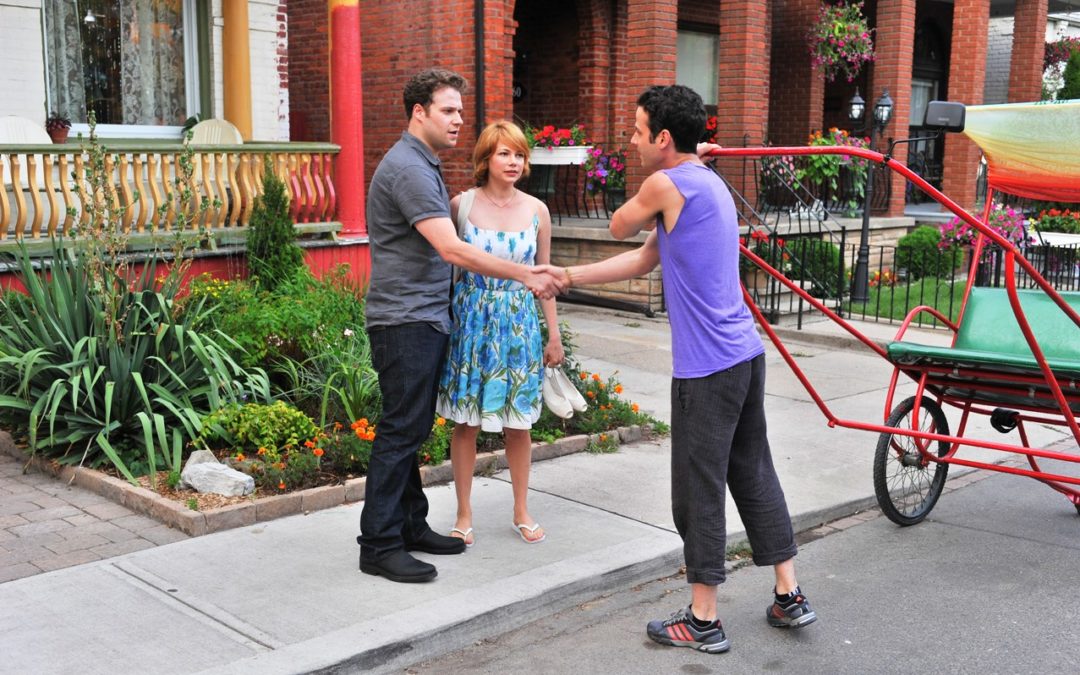 ‘Take This Waltz’ is what you may call a mood film. Made by Sarah Polley, who had earlier directed the heartbreaking Alzheimer’s love story ‘Away from Her’, this comedy-drama is a tragic ode to life. Starring Michelle Williams, Seth Rogen and Luke Kirby, as the three principle characters, the story explores the idea of a ‘relationship’ from the perspective of one person. Often in films, we are told a story where the characters either fall in love or are already in love. But very rarely do you get to see love, the comfort that it brings to life and the excitement that it takes away, all at the same time. ‘Take This Waltz’ tries to show the duality of the nature of relationships in a story that is not that complicated but in a style that is confident and easing.
Margot (Williams), a freelance writer meets Daniel (Kirby), an artist and rickshaw operator while on a business trip, and although they immediately share some chemistry, she reveals to him that she is married. However, it turns out that Daniel is living across the street from Margot and her husband Lou (Rogen) in Toronto. Although Lou and Margot appear happy together, it becomes clear that Margot is not completely satisfied with her marriage, possibly aggravated by encountering Daniel.
The film is made possible by the highly believable performances by Williams and Rogen as a married couple. The level of comfort that they share sometimes borders on boring and at other times, heartbreakingly endearing. My favourite scene from the film is the one where Lou informs Margot that he had been splashing cold water on her head every day, as a lifelong prank, planning to tell her on her death bed but instead is doing it now since she is leaving him.
While Rogen does a rare dramatic act, Williams plays the role of a dissatisfied woman like a pro. While there is nothing very evidently wrong with the marriage, it is the longing with which she looks across the street that tells half the story. Her intense sexual chemistry with Kirby and the heart tugging comfort with Rogen makes the viewer almost as confused about her decision as she probably is. But it is the director Sarah Polley who stands out as the vision behind this story. From the intoxicating joyride with blaring music and disco-lights to show the lust of a new relationship to the slow acquisition of furniture to depict nesting and boredom, the film is as much about performances as it is about colours, sights and sounds surrounding them.
Just so that you are warned, like the real life, this film is not PG-13. Watch it only if you are comfortable with naturalistic adult themed content.
Share karo yaar... tumhe filmon ki kasam