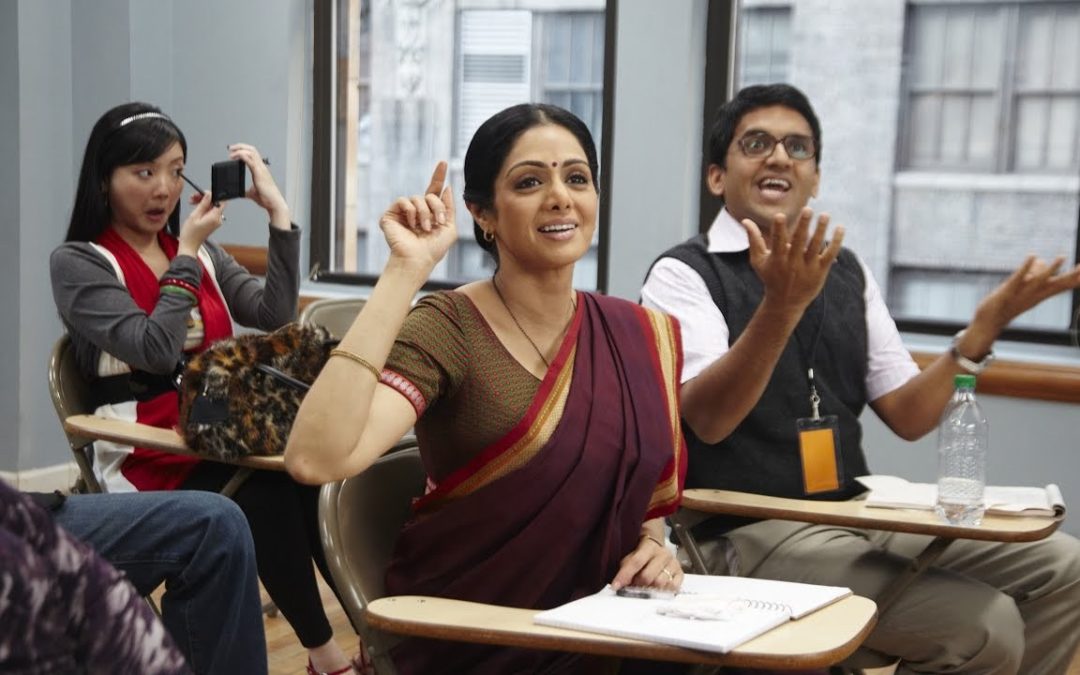 ‘English Vinglish’ is about a woman Shashi (Sridevi) who does not know English and starts going for English learning classes while visiting New York. Ironically, at heart the story is about Shashi finding the confidence to continue reading and speaking in Hindi without any shame. And this is one of the reasons that this film works so well. It has got its heart in the right place. ‘English Vinglish’ does not pretend to be English Vinglish but just Indian.
Director Gauri Shinde, has managed to put together a great star cast for this film all of whom work brilliantly together. Whether it is Shashi’s niece Radha (Priya Anand), her husband Satish (Adil Hussain) or the entire bunch from the English class, all the people come across as very authentic. No one is made out to be a caricature and the biggest proofs are the side characters like that of the English teacher David (Cory Hibbs) who is not restricted to a gay stereotype but given the chance to be more.
But of course, at the centre of the story is the character of Shashi, a woman whose family does not appreciate what she has to offer because she does not fit into the westernized, English speaking population that fill the metropolitans. Sridevi gives a performance extremely believable, with a spot-on body language and while she does not have too much dialogue but it is the little that she says that speaks volumes. Her encounter in the New York coffee shop is a mix of such extreme emotion and subtle humour, that it would shake the hardest of souls.
‘English Vinglish’ is a film that does not shake away from its roots. From Shashi’s house in Pune, to her sister’s family in New Jersey, things are kept as real as possible. Priya Anand who plays her niece, gives a very balanced performance as an American Indian, something that eludes most Bollywood films. Adil Hussain is though completely dreamy, plays a husband who though loving is still insensitive.
What’s lovely about the film is that while Shashi’s character is dissatisfied in the film, she is never shown to be in any way looking out for a romantic relationship. Her loyalty for her family remains unshaken and yet she enjoys her new found freedom and the small pleasures that it brings along. Her relationship with Laurent (Mehdi Nebbou) is beautifully summarized in the last scene of the film where she thanks him for making her feel good about herself, while her husband watches. And she gains the respect she wanted on her own terms without resorting to any melodrama. It is the lack of drama that makes this drama a great watch. This film belongs not just to Sridevi but even more to Gauri Shinde, who has made a film with heart and a style truly its own. A must watch for everyone!
Share karo yaar... tumhe filmon ki kasam