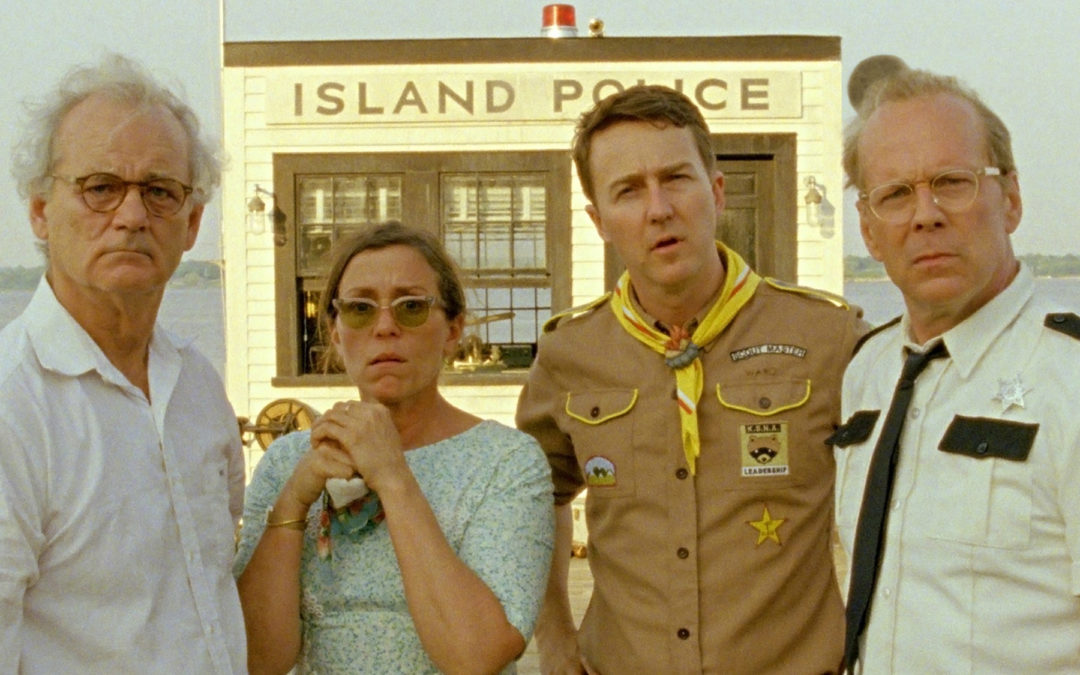 Moonrise Kingdom, creates this strange world of acute reality for its viewers. Love stories, especially those involving young children are often trivialized in films. The reason behind it being the assumption that love is the business of adults. In this film, the director, Wes Anderson, does create this illusion in the begining when Sam Shakusky (Jared Gilman) and Susie Bishop (Kara Hayward) roam around the woods building campsites. We look at them as two children being stupid, rebellious children together, but the beauty of the film is that their love is not trivialized. We find that both are not running away in love but running away to find love. They are kindred spirits who did not find an understanding world till they found each other.

There are many aspects of the world that are symbolised through the film’s characters. The stoic, insensitive, unshaken system played by Social Services (Tilda Swinton), the loveless adults played by Walt and Laura Bishop (Bill Murray and Frances McDormand), the regret of opportunities lost seen through Captain Sharp (Bruce Willis) and the untarnished but subduded courage played by Scout Master Randy Ward (Edward Norton). There is also a small role of the overbearing know-it-alls in the form of Commander Pierce (Harvey Keitel) and the system loopholes as Cousin Ben (Jason Schwartzman). All the players in this film could as well form a world and everything it stands for.

This film has a very evident Wes Anderson touch but it is not like any of his earlier films. Yes it does talk about outsiders but this one makes the story hopeful. My favourite scene is the one where the young boy scouts decide that it is their duty to help Sam despite what the world might have them do. That one scene of complete rebellion is so hopeful and beautiful that it makes you wish that the child within you would never die.

The film has a steller cast and everyone does there bit, in true Anderson fashion. But it is the brilliant locations, fantastic cinematography and sountrack that translate the story so beautifully on screen. There are some films that are a great mix of all the tools available to the filmmaker and this film is like that in every aspect. Almost theatrical in its style, Anderson uses the locations like a stage, the characters standing out in their costumes. Though not a comedy in terms of the story, Anderson imparts humour through his vision of the world where the characters reside. And this is presisely why the film works so well. It brings through the story not just through dialogues but through visuals and music.

While coming out of the movie hall, I happened to come across the poster of last week’s release ‘Barfi’. And although I did like the film, I could not help but feel how much more natural ‘Moonrise Kingdom’ felt in terms of its style. Though the visuals were equally bright, the characters really colourful, somehow nothing seemed forced or manufactured. The point of this train of thought is that there were less than 10 people sitting in the theatre watching this beautiful film with me. With such odds, it is not surprising that we never have a high bar to compare what we watch.