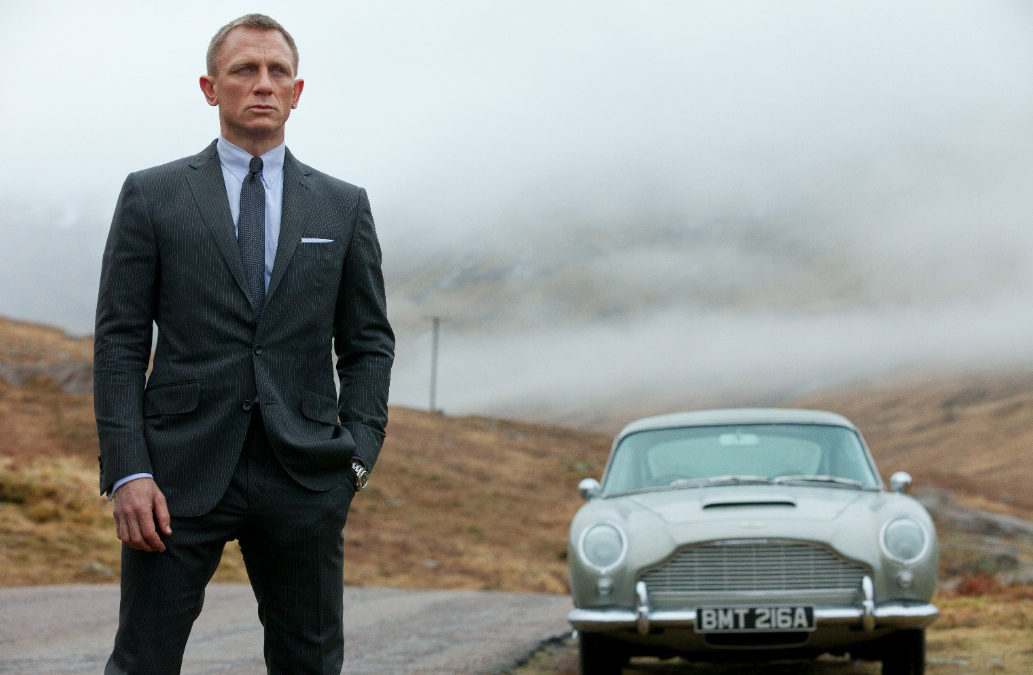 Every generation has grown with a different idea of James Bond, the only common factor being a fancy car and a suit. I am afraid, I am from the 90s, a generation which grew up on Brosnan’s version with the explosive pens, invisible cars and the multipurpose watch. And as a teenager I assumed that this is what Bond was, until very recently as a part of Bond film marathon I saw Sean Connery’s 1964 film ‘Goldfinger’. I mention this film for many reasons, one of them being the fact that you would enjoy ‘Skyfall’ much more if you have seen it.

‘Goldfinger’ started the trend of now common pre-credits sequence and also saw the first appearance of the Aston Martin DB5. But what struck me the most during the course the film was that except for a transmitter and of course the car, for most part Bond survives only on his skills. And this is precisely where ‘Skyfall’ takes our new age Bond back to. “The Circle of life” as Bond very aptly mentions in the film.

The story involves, Bond (Daniel Craig) being asked to find the man behind the theft of a hard drive that contains details of undercover NATO agents in terrorist organizations. Meanwhile M (Judi Dench) comes under political pressure to retire during a meeting with the Intelligence and Security Committee Chairman, Gareth Mallory (Ralph Fiennes). The bad guy in the picture is Raoul Silva (Javier Bardem), a former MI6 agent with a grudge against M and enough knowledge and resources to destroy the MI6 headquarters.

‘Skyfall’ follows a slightly less treaded path to bring us a villain with a personal vendetta, much like our new age Bond who lets his emotions get the better of him much more than necessary. This film also brings in some of the missing links from the past such as Q, played by Ben Whishaw and Miss Moneypenny played by Naomie Harris and my favourite, the return of the Aston Martin DB5 as it was first seen. Yes, the red button is intact.

Bardem’s Silva is of the same league as Bane seen in the summer blockbuster ‘The Dark Knight Rises’ but more flamboyant and emotional. But what really makes him interesting is the fact that he is the other side of the coin, the exact opposite of all that Bond represents. While Bond is the best of the system, Silva is the mistake, the abandoned child. He is as tormented by his enemy’s existence as he is of his own, clearly seen in the last sequence. And while we may love to say the words ‘it’s just business nothing personal’ it is the personal shit that makes for the real adrenaline pumping drama. And that is what we have here in ‘Skyfall’. Where is the fun where there is no girl to save at the end of the gig? Unfortunately, here we don’t have a flimsily clad girl but the motherly, bitch of all seasons. Nonetheless, we have 007 reporting for duty.

The film plays out its cards very smartly, in terms of the present as well as the future of the franchise. It has everything one can hope from a Bond film except for the girls, who have been somewhat neglected. While we will get to see Ms Harris in the future films, I would have really liked to see a bit more of Bérénice Marlohe who plays a two bit role as Sévérine. The conversation between her and Bond at the Casino is layered with emotion and tension, something that the film misses terribly since Vesper Lynd (Eva Green). Bardem gives a wonderfully eccentric performance as Silva and Craig, though shaken and stirred seems to be coming along just fine as the stoic 007. I was surprised that the writers have taken his age into consideration for the character but nonetheless I am thankful they did. I was slightly disappointed with Dench’s work though, as she strayed away from her usual stern form into something more emotional and human.

The action sequences have been choreographed brilliantly, with the one shot in Shanghai especially breathtaking. The use of colour, lights and the reflective nature of glass is marvelous and goes to show how even the most silent fights can be most thrilling. The pre-credit chase is another gem for the film, but such has been the case for all the Craig’ Bond films. What I particularly enjoyed the most was how old fashioned the film is when it comes to the basics. Shotguns, dynamite, knives and a 40 year old car VS an armed helicopter, machine guns and bombs is not something we see much in action films nowadays.

Director Sam Mendes has given us a Bond film which while completely original and fresh is also reminiscent of the past. With Bond completing 50 years, the films are actually a wonderful way of looking at every generation’s impact on the same character. So don’t just watch ‘Skyfall’ but take out time to watch the best Bond film from every time period.