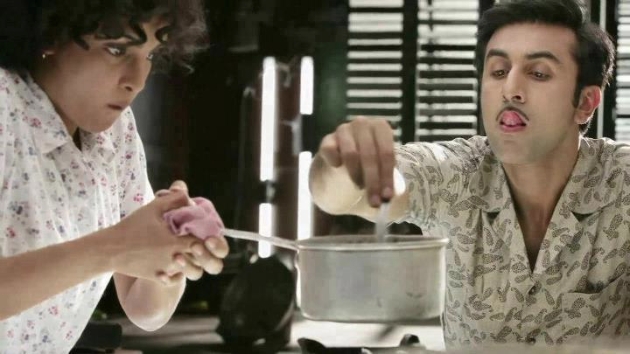 For me, ‘Barfi’ was a story of love lost and regret, much more than the saccharine romance between the deaf-mute boy and the autistic girl. It could possibly be because unrequited love stories always makes for better films but even more so because I have always wondered why people think that it is easy to live with regrets.

There are two very beautiful moments that sum up the entire film for me. The first is when Shruti (Ileana D’cruz) meets Barfi in Calcutta and realises that he does not love her anymore. The sense of regret and the pain on her face is much more profound in that moment, than the moment they acually separate in Darjeeling. The fact that the scene was accompanied by the heart-wrenching ‘Phir Le Aaya Dil’ by Rekha Bhardwaj in the backdrop, just makes it perfect. The second is when Shruti tries hard to grab a losing battle. The moment Jhilmil (Priyanka Chopra) screams for Barfi (Ranbir Kapoor), and it is for her to decide whether she would make him turn around around, is what defines her life. For a minute i almost wished she wouldn’t have asked Barfi to turn but this was a ‘happily ever after film’ from the start.

The story is very simple but the film’s multiple narrative, is used to create a sense of mystery. And though it works for its favour, I feel it also dumbs down the film’s potential. Without the narration of the characters, the film would have turned out to be spectacular, forcing the audience to their brain. But I assume a completely silent film would have been difficult to sell. The major eye-sore for me were the ‘three men’ playing instruments in different scenes, an act which not only reminded me of ‘Life in a Metro’ but also seemed delibrate and unnecessary.

Ranbir Kapoor as Barfi makes his performance flawless and natural. I only wished that the fact that the damaged nature of his character was explored more and not summed up as distrust by a narrator. Priyanka Chopra’s role is quite limited and that is a very good thing for the film. She is effective as Jhilmil but i am not about to shower praises on her. The surprise of the film is the actor who i unfortunately did not appreciate in the one Telugu film of her’s i had seen. Ileana D’Cruz does what not many female actors are able to do. She makes us believe that there is still hope out there and that this industry will not always be filled with untalented firangs.

The film belongs to Anurag Basu for the vision he has for the film and the breathtaking cinematagraphy by Ravi Varman. I am not sure how the crew made Darjeeling look so clean but I just wanted to take the first train back to the place after getting out of the theatre. Basu also uses the music and his actors optimally to set the tone of this film as lighthearted. The light-hearteness unfortunately becomes too much to take in the fag end of the film, because there is only so much you can smile. Nonetheless, ‘Barfi’ despite its few flaws, is quite entertaining to watch.