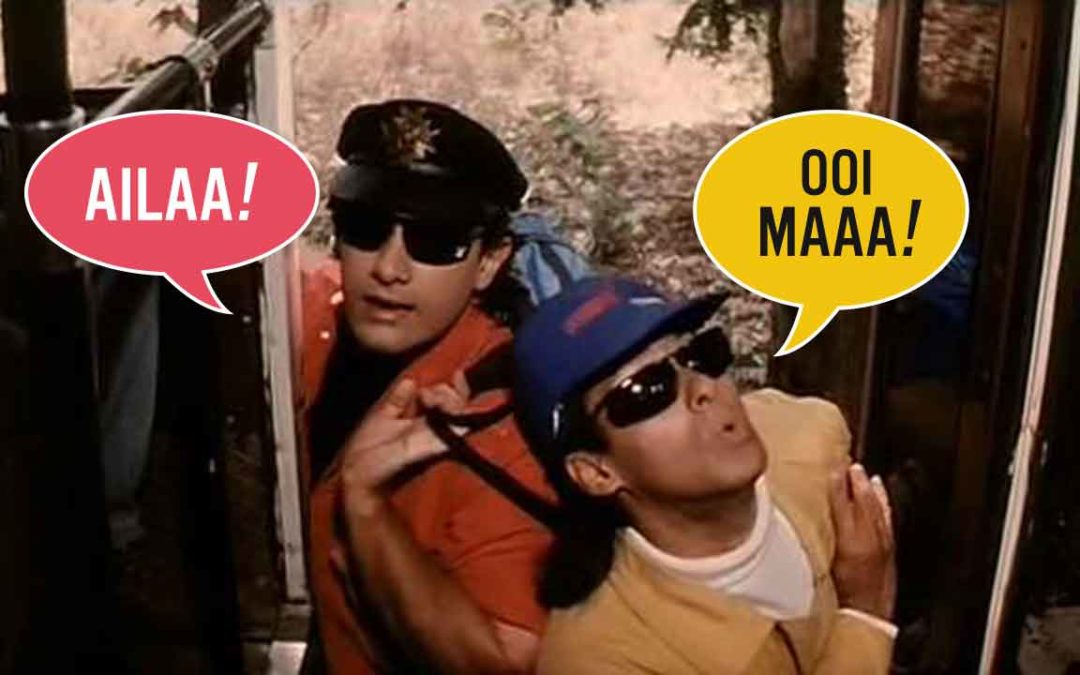 Why is ‘Andaz Apna Apna’ the funniest film of all time? I asked this very simple question to two people yesterday hoping that they would give me some perspective on this Cult classic. Unfortunately I was instead faced with an answer which sounded more like ‘duh!’ than anything intelligent. “The jokes are kept simple,” I was told but we all know there is more to this film than just the simplicity. If anything, I have rarely seen such a complicated comedy with so many sub-plots, memorable characters and brilliantly idiotic dialogues for each one of them.
The reason I was wondering so much about this film is because its humour works on a very basal level and still manages to be funny. With so many ‘comedy’ films today being a headache with their over-the-top sequences, the same is absolutely not the case here. I often wonder whether the director Raj Kumar Santoshi knew the ridiculousness he was embarking upon or did it happen by chance.   My favourite example is of course, the costumes. The red cap, jacket and shoe combo of Aamir Khan in the song ‘Do Mastanae’, Karishma Kapoor’s entire wardrobe and of course the cotton tipped nightcap Aamir wears during the song ‘Yeh Raat Aur Yeh Doori’, are all so lame, that I am forced to ask as to whether they were a mistake or deliberate. Maybe I can’t imagine someone to be that genius. Nonetheless, it works flawlessly in this story of two overconfident losers. I guess, Santoshi who wrote and directed the film would be the only one who would know the answers to these questions.
Ibelieve there are two types of actors. The first kind is their best either in their youth or when older and the second kind is brilliant at any age. Movie stars usually come in the first category, the hindrances being either stereotyping or inexperience. Why I wrote this is because, what we saw in ‘Andaz Apna Apna’ was the kind of stuff from both the Khans that is no longer possible. Amar and Prem are characters which were made believable by their unrestricted performance and sheer disregard for their images. As an audience we don’t see Aamir Khan or Salman Khan on screen. Instead we see two people who are completely out-of the-box.
Paresh Rawal, on the other hand comes in the second category of actors and remains my favourite from the film. His take on the criminal with Hen farming ambitions, Teja, is so completely brilliant and distinct from his role as the control freak Ram Gopal Bajaj that I wish that a whole film would be dedicated to the story of the two brothers. That is a film waiting to be seen and would find an audience any day. One of the recurring joys of watching the film is watching Teja, interact with Robert and Bhalla frustrated over their failed attempts to murder the heiress Raveena. Santoshi who co-wrote the dialogues with Dilip Shukla, managed to give each character a distinct voice though them. Sample two of my favourite ones below:
“Amar aur  Prem…Amar Prem, Pavitri aur Bhaktiras se bharpoor. Naam sunte hi mughe andaaz aa gaya tha ki tum filmi aur aawara kisam ke ladke ho. But now, tum to nikamme aur nithale bhi ho. And well, shakal se toh jahil aur moorkh dikte hi ho. And of course, apne aap ko awwal darje ke bewakoof sabit kar chuke jab yeh soonch ke aaye the ki meri beti ki shaadi mein tumhare saath kar doonga.” – Ram Gopal Bajaj.
“Hazaaron murgiyan, jo lakhon ande dengi. Lakhon andon se croron murgiyan aur unke kai crore ande. Aur arboon omlette. Woh khaane ke liye bread bhi mein doonga. Mein bakery bhi kholoonga. Bread ka Badshah aur Omelette ka Raja. Bajaj. Humara Bajaj.” – Teja.
While Aamir Khan (Amar) and Salman Khan (Prem) were the leading buffoons in this film, it belongs to as much to Karishma Kapoor and Raveena Tandon (Karishma/Raveena), Paresh Rawal (Teja/Ram Gopal Bajaj), Viju Khote (Robert), Shehzad Khan (Bhalla) and Shakti Kapoor (Crime Master Gogo). Even the 2 minute bits done by Jagdeep and Deven Verma as Prem and Amar’s fathers, Mehmood as Johnny from Wah-Wah Productions, Javed Khan as Anand Akela, Tiku Talsania as the Inspector, Harish Patel as Seva Ram ji from the guest house and Juhi Chawla and Govinda as themselves are all so memorable that the film would seem incomplete without them.
The music by Tushar Bhatiah is beautiful and though most of the songs are meant to add to the humour, if you listen to ‘Ye Raat Aur Ye Doori’ or ‘Ello Ello’ on the radio you can’t help but swoon. And therein lays the brilliance of this film, which was a box office dud at the time of its release. It is not about the actors or the music or the dialogues or the locations or the story. It is about all of it. I have said this before and I would repeat it again, ‘It is not just one thing that makes a brilliant film but a combination of elements which are unique, memorable and irreplaceable.’ ‘Andaaz Apna Apna’ is all of that.
Share karo yaar... tumhe filmon ki kasam