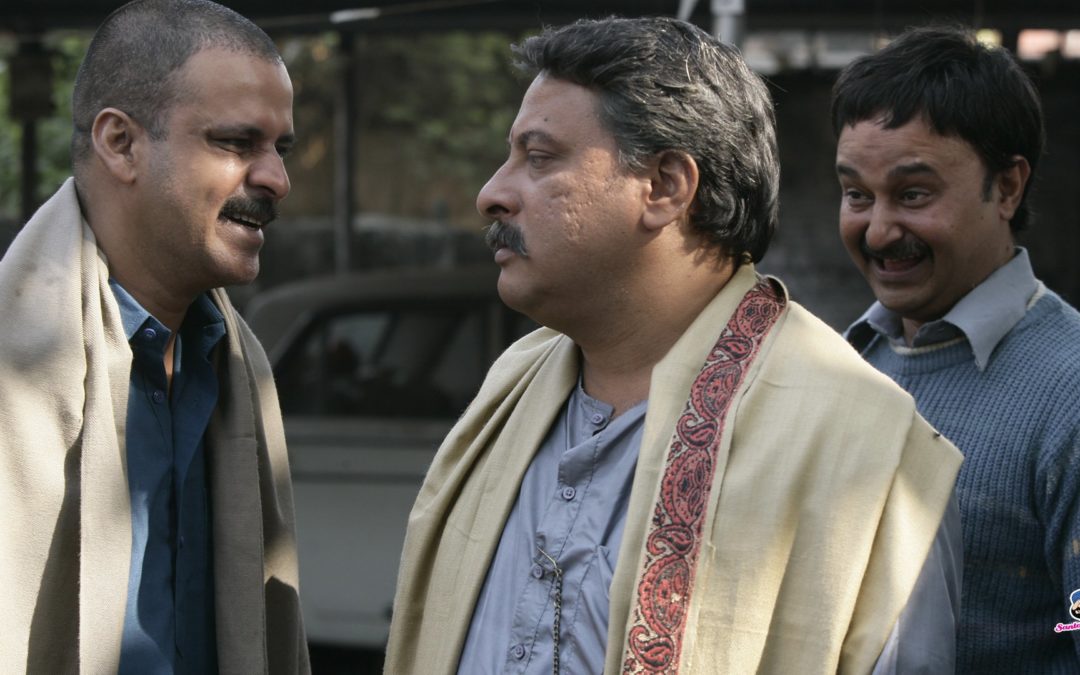 This is the review of the whole film, as it was made and probably how it is meant to be seen. After finally watching both the instalments yesterday I can still hear the gun shots in my head as soon as I close my eyes. And much needs to be said, if only I could find the right words.

There is nothing wrong with the film. Pointing out faults in it would be like criticising art which some love and others do not understand. And this is art because it does not fit in any pre-fixed categories of film making decided by our film industry. Those who will call it ‘different’ couldn’t be far from truth because I have not seen a more mainstream film in this year. With ‘Gangs of Wasseypur’ Anurag Kyshap has managed to bridge the gap between eccentric and entertaining.

There is no point in even trying to talking about the story as it stretches over 5 hours. All you need to know is that it a revenge saga between Ramadhir Singh (Tigmanshu Dhulia), the Pathans (Shahid Khan, Sardar Khan, Faisal Khan) and the Qureshi Muslims (Ehsaan Qureshi, Sultan Qureshi).  Starting from the pre-independence years and leading up to current times, this film covers decades laden with violence in the name of revenge. And though it remains the prime motivation, the characters are violent not because they are forced to be but because it is a way of life for them. Lives are disposable for them and this utter lawlessness, bursting out from everyone is what makes this film such a delight. It celebrates everything inhuman, barbaric and immoral with such humanity that the audience finds itself rooting for an insensitive goon like Sardar Khan (Manoj Bajpai) and then later his Ganja addict son Faisal Khan (Nawazuddin Siddiqui).

The film is filled with great performances. I could almost compare it to a trifle, with each of the layers being individually delicious but it is when they come together that the you get something delightful. Manoj Bajpai gives the performance of a lifetime as Sardar. You look into his eyes and see this frightening mix of anger, disdain and coldness which is shocking and absurdly funny. His scenes with his two wives Richa Chadda (Nagma) and Reema Sen (Durga) are delectable and dripping with humour, with both the ladies giving his enough competition to give his best. Richa Chadda has some of the best lines in the film and while the audience may have grown on the puritan love of Nirupa Roy, with this film, Nagma Khan gives us a completely new definition of motherhood.  Tigmanshu Dhulia plays Ramadhir Singh over a timeline of 50 years with the cool passiveness of a Lion in the jungle. He plays the character so rich with such smoothness and apathy that it would be hard to imagine him as anyone else. Some of his best scenes are with Satya Anand who plays his son in the film. It is only then that you see a Ramadhir who is impatient and restless, adding another layer to his otherwise uniform character.

Nawazuddin Siddiqui plays Sardar’s younger son Faisal in the film, and looking at him I couldn’t help but be reminded of Michael Corleone. I am not comparing the character because Faisal is nothing like Micheal, the only common denominator between the two being that both were thrust into the family business due of the untimely deaths in the family. But Faisal does not really transform suddenly, having commited his first murder much earlier with much effortlessness. And while he neither holds Sardar’s stature or Sultan’s raw power, Nawazuddin plays Faisal with this scary intrinsic calmness which I can only assume is a result of the Ganja. And just like Bajpai, Siddiqui also had much to do as a romantic lead too. His shockingly realistic romance with the blunt Mohsina (Huma Qureshi) is not what fairy tales are made of but provides moments of genuine joy through the film. Other noteworthy performances in the film are by Piyush Mishra as Farhan, the narrator of the story, Zeishan Quadri as Definite, Pankaj Tripathy as Sultan and Vineet Kumar as Danish Khan.

For me, the film was also a way to see the evolution of weapons through decades. In the first instalment the blood shed is more gruesome due to the use of knives as guns were not as easily available. There is a slightly demented pleasure associated with watching Sardar attempting the murder of a man twice his size purely on the basis of adrenaline rush. But in the second instalment with the pistols, semi-automatics and even bombs available freely, the bloodshed is less dramatic but much more in number. And this will essentially remain the difference between the two parts. They do speak of different times, with the only thing joining the character being the thirst for blood. “Baap ka, Dada ka, Bhai ka, sabka badla lega re tera Faisal,” says Nawazuddin’s character to his mother. It couldn’t be summed up better.

Written by Zeishan Quadri, Akhilesh, Sachin Ladia and Anurag Kashyap, the film provides the punch of fabulous entertainment that probably ‘Kill Bill’ did but with its own style and substance. The music by Sneha Khanwalkar (soundtrack) and G. V. Prakash Kumar (score) takes the film to another level. Sitting in the theatre I was wishing that I could close my eyes as the speakers played ‘Keh ke lunga’ and ‘Kaala Rey’, only that the visuals were just too beautiful to be missed out on. No words are enough to describe what Kyashap has achieved through this film. His vision translates onto the screen in an absurd, fragmented and yet flawless manner, making me feel almost exhausted with enjoyment by the end of the film.

Those who have criticised the first film because of either the violence or the cuss words, better stay at home with their Romance DVDs. ‘Gangs of Wasseypur’ may be shocking, crude, brutal and worse but it is sure as hell full Paisa Vasool entertainment!