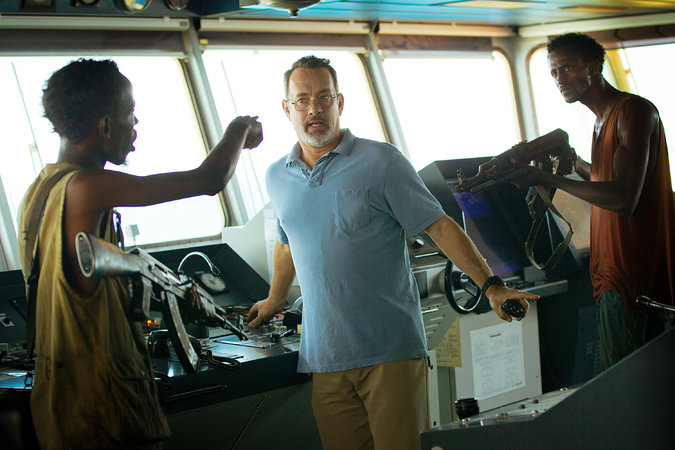 Many years ago, when I was not this cinephile that I am supposed to be now, I was watching ‘Ocean’s Eleven’ for the first time with my little brother on the DVD player. I did not know anything about the film except that it starred George Clooney, Matt Damon and Brad Pitt. But I remember, a few minutes into the film I said to my brother that the film looks like it was made by Steven Soderbergh, whose Traffic and Out of Sight I had seen before. I am very proud of that 18 year old self of me now, because I somehow I had the sense of recognizing the similar use of frames in the films to come to the conclusion. As I came to the final credits of ‘Captain Philips’ and saw the name Paul Greengrass across the screen, I was surprised I did not catch it sooner. Greengrass, who made the thrilling and brilliant Bourne Supremacy and Bourne Ultimatum, is one of those few directors who manages to create very entertaining action cinema without compromising on the emotional quality and relevance of the subject and the characters involved. The same is the case with his latest feature which stars Tom Hanks as the titular character. The screenplay by Billy Ray, is based upon the book, A Captain’s Duty: Somali Pirates, Navy SEALs, and Dangerous Days at Sea by Richard Phillips with Stephan Talty.
In the film, Richard Phillips (Tom Hanks) takes command of the MV Maersk Alabama at port in Oman, with orders to sail its cargo through the Gulf of Aden to Mombasa. During the journey four pirates led by Abduwali Muse (Barkhad Abdi) board and take control of the Maersk Alabama, capturing the captain while most of his crew hides in the ship’s engine room. Soon after they are able to capture Philip on a lifeboat hoping to secure a ransom. As the lifeboat heads for the shore, tensions flare between the pirates as they run low on khat, lose contact with their mother ship, and are later intercepted by the U.S. Navy destroyer USS Bainbridge.
The film, soon as the ship sets on its course, wastes no time in turning into a breath-taking ride. As a member of audience I know that the pirates will succeed in taking over the ship but every second before it actually happens I was glued to the screen with anticipation and even wonderment, watching four men on a small boat take over a mammoth of a ship and eventually even fight the Navy.
One of the things I was afraid of after Philips is taken hostage into a lifeboat by the Pirates, was the potential of the film turning into an emotional, soppy tale of American capitalism and poverty and family. These things find their way into the film but at no moment did I feel that it was forced or uncalled for. Despite the very obvious pointers towards the poverty and the living situation of the men, who are constantly chewing Khat to kill appetite, the flow of the film is very much in place and never diverts from the prime focus – to save the life of Philips.  That the four pirates could stand a chance in front of the entire US Navy and SEAL team is not a question, neither in the mind of the audience nor even Philips who at many points tells the pirates flatly that the Navy would rather sink the lifeboat than allow it to reach the shore. But still every small action is shown with a detailed authenticity, not to generate a pre-programmed response but to just tell the story. The same film would have been completely different in the hands of another director, maybe a lot of action or a lot of drama but Greengrass chooses a tight rope walk between the two.
Many a times, I watch films that could have ended at many moments in the last 10 minutes of the running time. Where it chooses to end, says everything about the film. Captain Philips ends with an open shot of the small lifeboat lying between the two giant Navy ships on the vast ocean. It’s neither celebratory nor depressing. It just makes me think.
Share karo yaar... tumhe filmon ki kasam