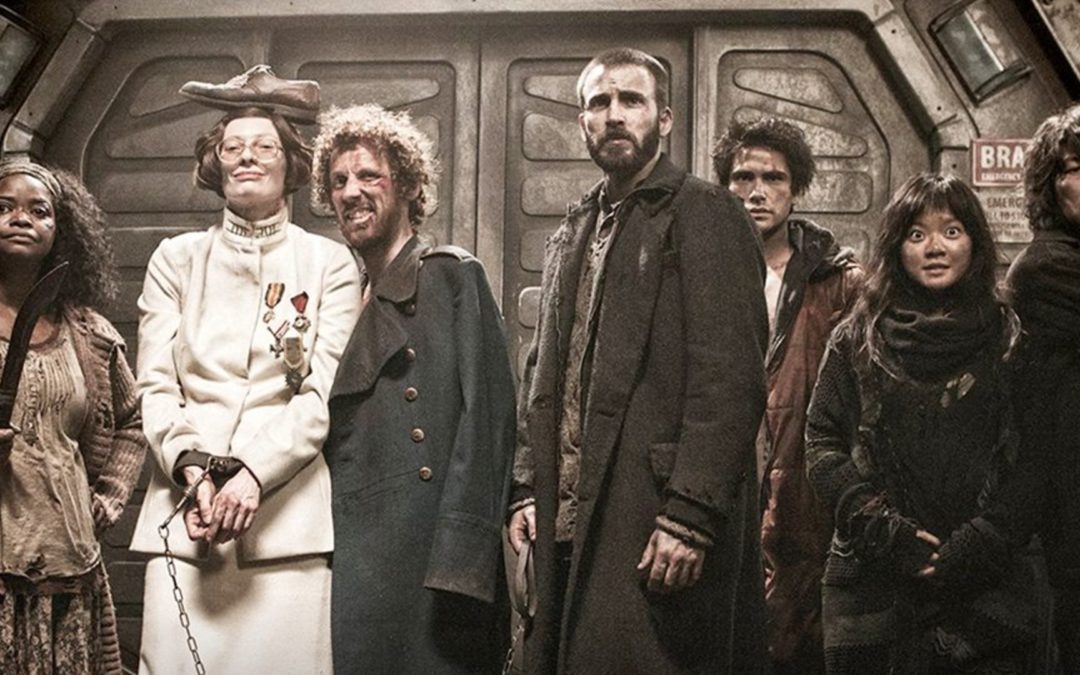 I recently read not one but a couple of articles citing the death or irrelevance of movie reviewers today. It’s true. Most people can’t even differentiate a real review from a paid one and it is a fact that people hate reading. So it all comes down to the stars attached next to the film title. So why even write if a symbol can explain the difference between good or bad cinema. I do not really write because i know a bunch of people will or will not watch a film because of what i said about it. I just write for myself, to express my feelings for cinema, because it is absolutely one of the things that brings joy to my life. So however irrelevant movie reviews might get, I will continue writing, whether you the movie going audience reads or not.
Coming to the review of ‘Snowpiercer’. The film tells the story of world which reaches an ice age that kills nearly all life on Earth. The only survivors are the inhabitants of the Snowpiercer, a massive train, powered by a perpetual-motion engine, that travels on a globe-spanning track. A class system is installed, with the elites inhabiting the front of the train and poor inhabiting the tail. The film starts out a revolution where Curtis (Chris Evans) leads the tail inhabitants in a revolt, forcing their way through several train cars to the engine.
Now, i know what you are thinking… I thought the same thing. Whats with all the French revolution hangover that so many films seem to have nowadays. But who cares as long as it is entertaining, right? And Snowpiercer is extremely entertaining. Despite the gloomy setup, it is one of the most thrilling and very surprisingly humourous films i have had the pleasure of seeing this year. I was actually so engrossed yet so inspired that i wanted to start writing this review halfway through the movie itself. I controlled myself and am writing this after the end.

There is nothing new under the sun, really, they say. This film could have been ‘The Matrix’ with Neo waging an attack on the machines to save humanity. Or ‘The Hunger Games’, the immensely loved but very much average production to satisfy the minds of young adults and JLaw fans. But it is neither or anything like you might have seen before. It takes on the concept and builds a world around it that is truly terrifying and still breathtakingly beautiful at times. Each of the compartments of the train are designed and depicted with great detail that inspire awe, especially since its an end of the world kind of a setup. And it does it without ever losing the interest of the audience or at the cost of mundane action sequences. Director Bong Joon-ho, does a great job at balancing the various elements of the movie so that it never really feels overbearing or too frivolous. Of course it helps that the film stars a truly fantastic Tilda Swinton, who almost steals the show with her embarrassingly funny performance. It also stars Chris Evans, a carrot for you Captain America fans. And Ed Harris in a guest appearance.
The film is based on the French graphic novel Le Transperceneige by Jacques Lob, Benjamin Legrand and Jean-Marc Rochette, and while watching it i could almost picturise it as a comic book, but the screenplay by Bong and Kelly Masterson keeps those elements just in the right amount (remember Watchmen!!!)
Anyway, if you have been mourning like me about the lack of awesome action films in the recent times – watch it. If you don’t like action films but love drama – watch it. And if you just like films that has buildings crashing down in the name of action…why are you following my blog?
Share karo yaar... tumhe filmon ki kasam