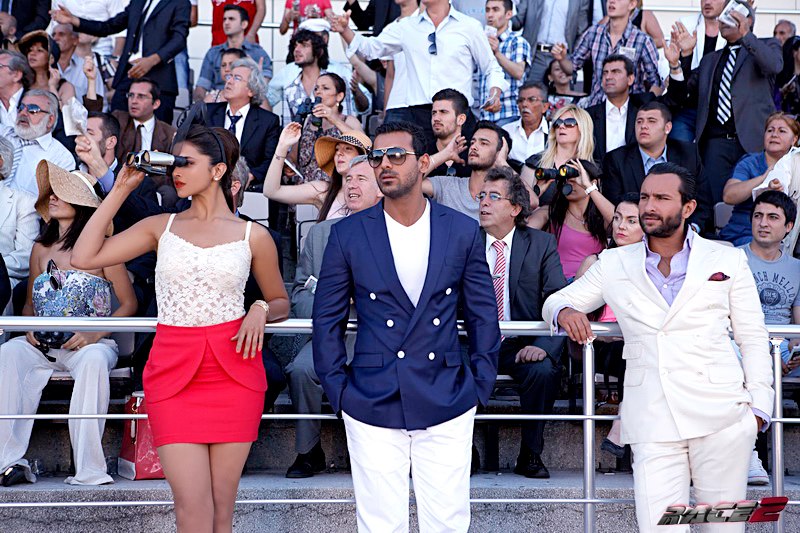 This is not a review.
This is a sincere request to anyone reading that, whatever you may hear about a film called ‘Race 2’, please do not go and watch it.
I am not writing this as a woman who watches a lot of critically acclaimed films. I am writing this as a woman who has enjoyed watching films such as ‘Gunda’, ‘Race’, Mard’ and even the recent ‘Student of the year’. The above stated films may not have garnered a 5 star review from my end but in no way did they make me go off to sleep out of sheer boredom.
Race 2 has many problems so counting all of them would not be fair to the filmmakers. But my biggest problem with the film, keeping aside the fact that there is no story and the dialogues make you want to puke in your mouth is the simple fact that not one of the lovely actresses in the film ever dance! Where is the ‘Zara zara Touch me! Kiss me!’ routine? Where is the ‘Race saanson ki!’ which had Bips, Kaif and Sameera Reddy jiving their legs to. And where is my favourite ‘Khwaab dekhen jhoote muthe’ where Kaif shut the mouths of all those people who said she could not dance. Instead in this film I keep seeing Saif Ali Khan dancing like a wooden monkey, a sight that I did not pay 120 bucks for. Yes. Deepika is wearing almost nothing in the film but would it kill you guys to make her dance to a couple of songs instead of focusing on her face and her lipstick colour so much?
This film is so ridiculous that it makes the viewer miss the shirtless Akshay Khanna by the end of it. Enough said.
Share karo yaar... tumhe filmon ki kasam