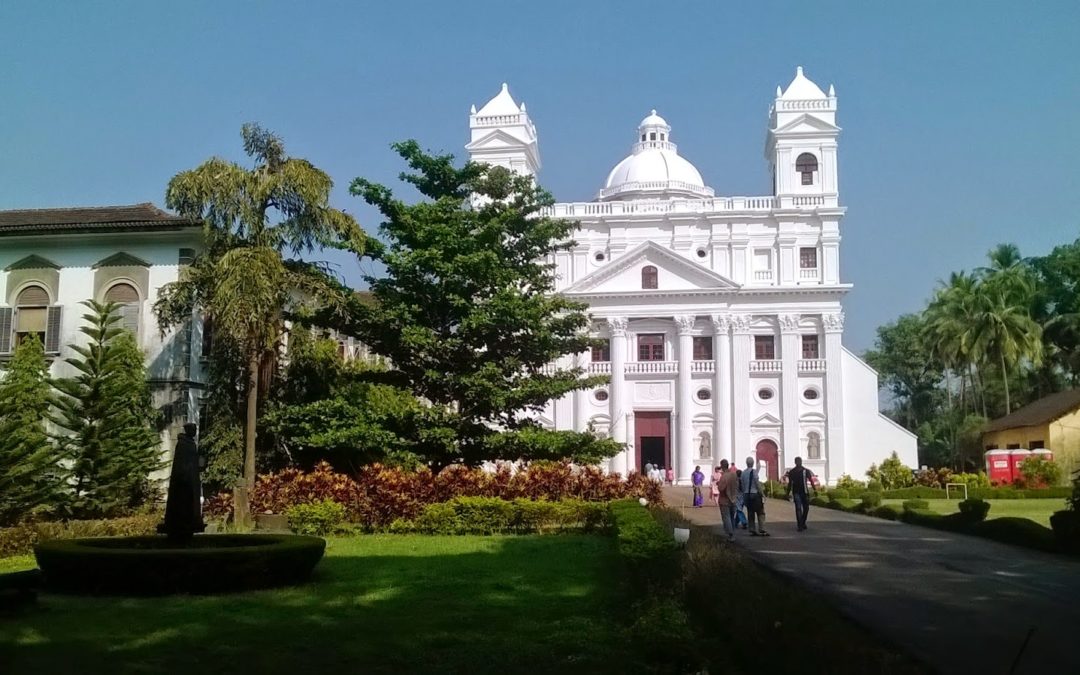 After 2 hours of what i can only describe as intense female aggression at its worst, which is almost always visible in the Mumbai locals i managed to reach the Vasai Road station to run after my train in full Bollywood style. Of course, there is always the guarantee that there would be no suicidal prince charming inside, unlike films and only screaming babies or loud teenagers. This time it was the latter who made it impossible to sleep. So broken down and sleep deprived i reach Madgaon, at 8:00 am IST. After an overpaid auto drive to the Kadamba bus-stand, i was welcomed by a line for ticket to Panjim, which was even longer than the one in front of the overhyped Starbucks when it opened next door. Finally in Panjim, a breakfast at Bodega, a stylish bistro in some fabulous looking Art centre charges me up as do the two espressos i had. Next stop – This mysterious hostel i had found, The Old Quarter, where i am supposed to board for the night. Rarely do you get value for your money while on a holiday but this place with its insane shower heads, chic interiors and free wifi turns out to be all that and even more. I am sharing a room with an english woman, a polish girl and another lady who is here for the film festival.

I find that the city is choc-o-bloc with festivals and delegates today. A peace conference, an exposition of relics of some old christian dude and a film festival, explains the over exposed police all through the city. I check if i can watch any films and the woman gives me a list of hindi films that are being shown for free in the evening. The only low point being all of them were films that i can catch on Sony Max as well. Then i go to Velha Goa, or old Goa to check out some old portuguese architecture, some of which was impressive, Jesus statues but the relic of Saint Francis Xavier turned out to be just plain creepy. Why do i need to stare at that dude who died like 500 years back? Back to Panjim, checked out the nearby Mirmar beach…disappointing. Felt more like a lover’s nest than a public beach. Then had an authentic Goan meal at the posh Mum’s Kitchen. While the meal was great, especially the warm bread they served with the Hooman prawn curry, a mistake in the bill by the staff left a sour taste in my mouth. Rinsed the sour taste off with a cup of tea at Cafe Real, then a mojito at the exceptionally beautiful Verandah Restaurant at the Panjim Inn and then walked back and crashed on my bunk bed.

The second day was a disaster from the get go. After a long breakfast in the hostel, Angie, Ana and me went to Old goa again. A quick stop to look at Francis Xaviers remains and then off to the nearby Karmali railway station to catch a train to Cancona. As soon as we enter that wretched church I realise that we are joining about 4000 other religious nuts who had nothing better to do on a wednesday afternoon than to look at a dead guy. But the trigger had been pushed, things were already in motion and we were stuck in an unending line for 90 minutes. The only thing that did come out form the entire episode was that i got to see ‘the holy spirit’ enter a woman who was rolling on the ground shaking uncontrollably and doing what  i can only call an intense dance form. But the adventure had just begun. Reaching to Karmali was a task, trekking down a highway then through a village and finally half a kilometre of railway tracks. And the icing on the cake was of course to find that the train did not stop at the station which very sweetly irctc had forgotten to inform me, or i had forgotten to check. My bad. So a taxi ride, two bus rides and 3 hours later we finally reached Palolem in the darkness of the night. And of course we were engulfed by every guy selling a hut on the beach. A nice dinner on the beach and i thought i am going to sleep like a log tonight. Ice cold feet and chilly air = no sleep at night.

Ana and me were sure that bad luck was chasing us, with everything turning out to be an adventurous disaster the day before. Angie is a bit more on the optimistic side but we were sure it was some Goan evil eye. But a nice swim in the ocean and a good meal cures everything. After the swim we went on the Palolem river for some birdwatching. I am not the one for birds but i have to say, that the kingfisher we saw was marvellous. Absolutely breathtaking. I understand why Mallya is so obsessed with it now. And to top it all we saw one catching a fish from the river. Back to the shore, we meet up with Lucky, the guy who was originally supposed to show us the birds because of his extensive knowledge about the migratory birds and he is pretty chatty, dropping in the names of the few birds and complaining of how less the rest of the boatsmen know. Showoff! Then we are off to Agonda, a much more upscale version of Palolem. A small nap on the peaceful beach, a mandatory lemon-ginger tea and then we are back to our temporary home. I have a strong cup of coffee and some unauthentic spanish food, followed up with some reading on the beach.

The last day was the most exciting. Made a small trekk to the nearby rocky Colomb beach next to palolem early morning. After managing to lose Angie and then finding Angie, giving me a hint of what life used to be like without cellphones I devoured 3 people’s breakfast at a new shack. Feta cheese and vegetable quiche, watermelon juice, French toast, French fries and coffee and i was set for the day. A small visit to the nearby town for some illegal activities (ha!) and we were back on the beach for a swim and a huge middle-eastern meal followed by the most beautiful sunset i have ever seen in my life. A small ride to the nearby Cancona railway station and i already miss the beach now.