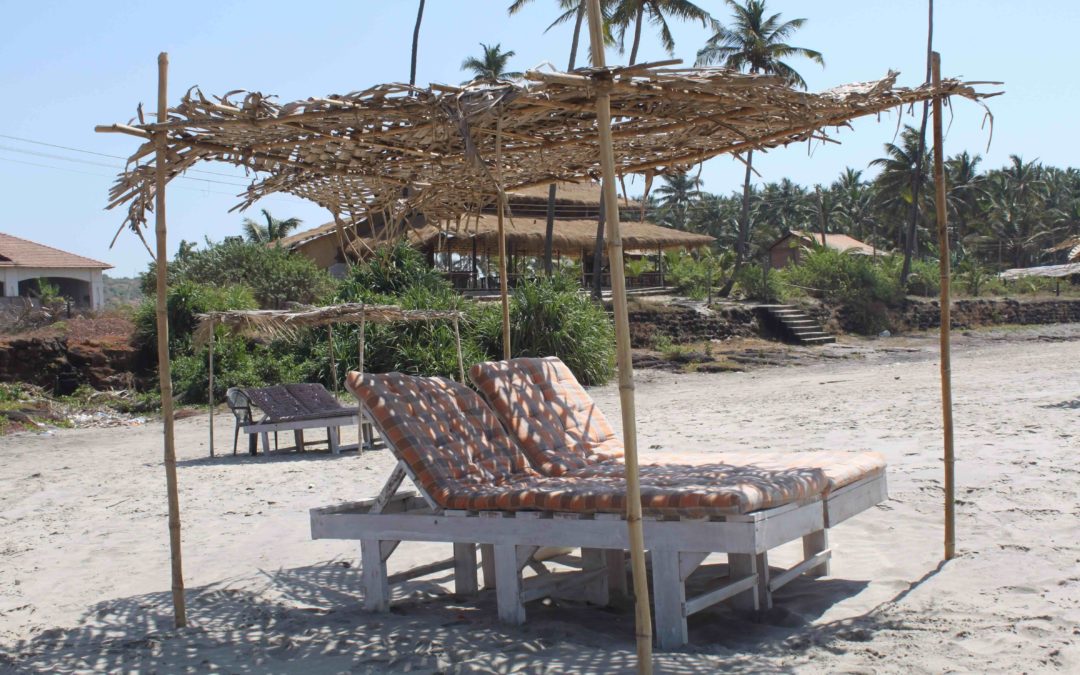 My travel to Goa has always been an expensive ordeal. As one of the restaurant owners near the Mabor beach told me, “North goa is full year season madam. You want crowd, you go to Baga.” But i have seen the crowd. North goa has got this infectious spirit that gets to you. Your mind goes ‘Wohooo’ as soon as you step out at Brittos cafe at Baga Beach. Its a different thing that a glass of strawberry juice will cost you a 120 bucks and you will end up paying more on coffee and juice than on Booze. So this time around I took a trip down south, and ah what a revelation. The virgin white sand beaches, the cheap food and the water!!!

The sad vegetarian i am, most breakfasts consist of baked beans on toast with a side dish of mashed or baked potatoes. But there is a lot to choose from, with English, American and French breakfast. Top that with a cup of coffee and you are energized for a day of beach exploring. Staying at Colva beach would be a good idea. The place is full of restaurants and may i add the food is cheap. One look at the menu and my jaw dropped to the floor. Everything is below 100 bucks which, if you have ever been to Goa you would know is very hard to find. Combined food bills never came below 2000  and over here in Colva it was barely 300 bucks. So order away and enjoy.

The lunch was at this isolated beach shack at Zalor beach, which lies somewhere south of Varca beach. A small beach with white sands and a beach shack with only foreign tourists, it is quite a sight. But unfortunately, the one hour wait time for the food was not that appetizing. It was the first day and I preferred to play it safe with the food (having had bad food experiences in North Goa). But surprisingly, the food turned out to be quite a change. Chilli Chicken, Veg noodles and a plate of fries are not some brain teasers but still, you know good food when you put it in your mouth. The vegetables were fresh and not overdone and the overall it was an enjoyable experience. Not to mention the sunbeds lying around inviting me to catch some sleep. The heavenly wind just made it better.

Dinner again at Colva. At some place called 49. The food was nice but don’t trust the timings. Though the place is supposed to start at 6 in the morning for breakfast, you just find people snoring away even at 7.

The Mabor beach… Another isolated beach with white sands. No shacks. Just the water and me. But the road leading upto it is lined with restaurants, resorts and what not. We chose a place called Jazz Inn. Wooden decor and completely empty, the owner welcomes us with a smile and a menu. Some chit-chat about the destination later we open to find that this place serves at the North Goa prices. Challo… ab lag raha hain i am in Goa! A glass of freshly squeezed orange juice later (which costed 100 bucks, what else) we zeroed on some cheese pakoda, Lasagna Bolognese, veg noodles and chilli beef fry.

Though everything tasted wonderful, the absolute stand out was the cheese pakora. Not a paneer pakoda, this one is actually a mozzarella cheese pakora served with some yummy coconut chutney. And even though we asked for Ketchup as soon as the plate arrived, no body touched it.

The lasagna was …  how do i put it… beefy. Between two layers of pasta and cheese was a whole layer of beef. “If you like the taste of beef, you would like this,” said Boo, as he gulped down a whole bowl. The Chille beef fry was another winner here with the caramalised onions on top. I would know only what i ate! My veg noodles were as always satisfactory, so i was not complaining.

Last but not the least. Serabatim Beach. This is purely dedicated to one of my friends addicted to tea. Night time at the beach. We order some Indian food, a veg pakoda and ginger tea. The prices are dirt cheap and I am expecting the waiter to show up with hot ginger tea in a small cup. Instead what i get is ‘adrak wali chai’ in a Beer mug. And how much does it cost? 20 bucks. As soon as it arrived i could see gucchi living on that beach in a tent!

During any travel, the food plays an integral part in enhancing the experience. And during this trip to south goa, I never felt as if the beach shacks were out there to loot me. The food was delicious (for most part) and easy on the wallet. And that I say is a deadly combo.