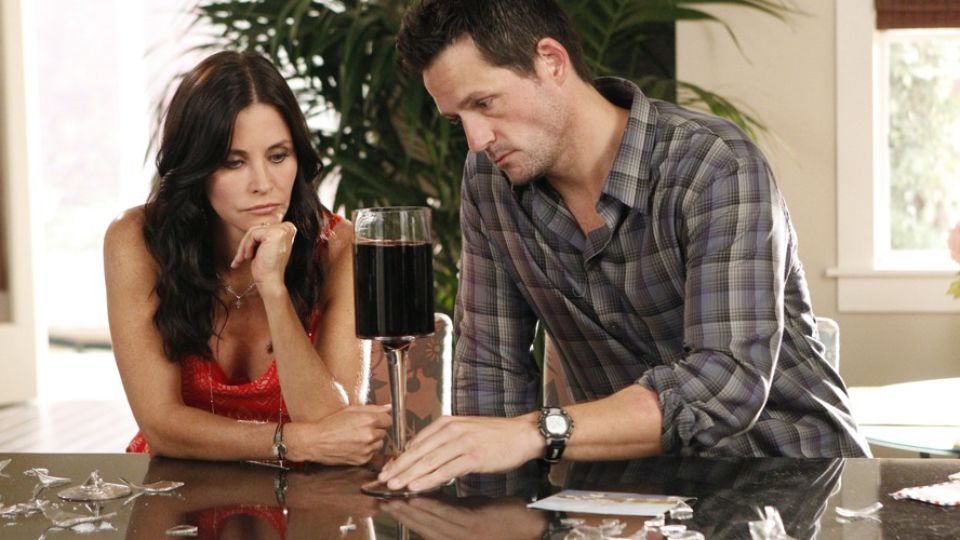 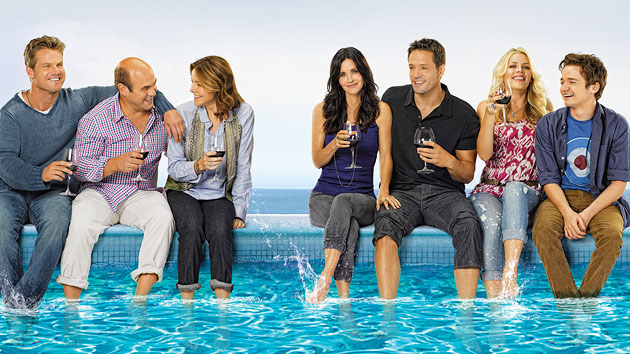 Cougar Town is a show that makes me want to grow old. Jules (Couretney Cox) and her gang of wine drinking buddies who can afford to do literally nothing most of the time is what I call the perfect place to be when you are in your 40s. ‘Friends’ was funny but had one major flaw that no one could get their brains around – how much time can people spend drinking coffee? Cougar Town is the answer for all those people. It gives you their man-on-man bonding without questioning anyone’s sexuality. There is lot of unapologetic sex. And of course lot and lots of booze. And why not? Aren’t they all adults?
Cougar Town, primarily has seven inhabitants and for a change almost each one of have a strange but important space in that universe. While Jules is the centre of the storyline and its is her ‘Monica’ like persistence that keeps the rest 6 together, the shared relationships between the rest is what makes the show so fun to watch.
The main characters of this crazy comedy are:
Courteney Cox as Jules Cobb, who is a recently divorced single mother exploring dating and aging. Jules spent most of her 20s and 30s married to Bobby and raising a son, Travis.
Christa Miller as Ellie Torres is Jules’ feisty next door neighbor and best friend. A stay at home mother, Ellie is married to Andy Torres, and the two have a son named Stan.
Busy Philipps as Laurie Keller is Jules’ young attractive assistant. She considers herself Jules’ best friend, although Jules’ true best friend Ellie is often jealous of their friendship.
Brian Van Holt as Bobby Cobb is Jules’ ex-husband who currently lives on his boat in a parking lot, which makes him legally homeless.
Dan Byrd as Travis Cobb is Jules’ and Bobby’s son. He loves both of his parents although is constantly embarrassed by both of them.
Ian Gomez as Andy Torres is Ellie’s husband who is also Jules’ next door neighbor. He and Jules’ ex-husband Bobby are best friends.
Josh Hopkins as Grayson Ellis is the owner of Grayson’s Pub. He lives across the street from Jules.
WINE IT UP EVERYONE!
As can be understood, being partially drunk all the time is what makes the people in this social group fun. Nothing is appropriate. Jules smothers her son with too much attention and spends a lot of time trying to look and feel young. Hear her say ‘Riahnna and facebook’ and you know that while slightly pathetic, the show celebrates the depressing older age of Jules in a completely fresh manner. There is also the age of question of why it is alright for older men to seduce younger women and not the other way around. The rivalry over Jules’ friendship between Ellie and Laurie is also funny and gives the group an edge since not everyone is ‘In Love’ with everyone. A good addition to the group is Jules and Bobby’s teenage son Travis. Played brilliantly by Dan Byrd, he is not remotely the same age as anyone else in the group but despite that does not disrupt the group dynamics. If anything he adds to it by his sarcasm and his in depth knowledge of Jules’ obsessive nature. 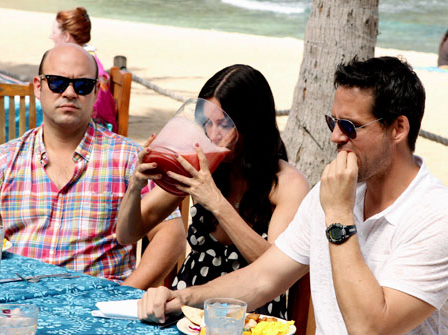 One of the most exciting parts of this sitcom is the relationship that Bobby and Andy share. Bordering of disturbing, Andy is unapologetic about his intense love for Bobby ‘as friends’ of course. And watching a middle aged semi-bald man doting over his drunk best friend is outrageously funny. Grayson, the suave recently divorced neighbour joins into this company a little later and in the beginning I thought that he would never rise up to the insanity of the rest and be content in the predictable relationship with Jules. But I was thankfully wrong. Grayson opens up slowly, at first ignoring the forced friendship but is soon sucked into this world of ‘barbecue Saturdays’, morning coffee and mid-day wine sessions. Who would not?
Wine it up and check out this uber cool comedy.
Share karo yaar... tumhe filmon ki kasam