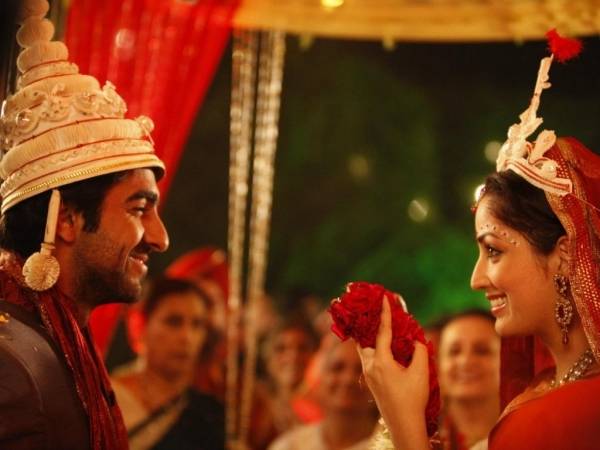 Once every 12 months comes a film that restores my faith in Bollywood or Hindi Film Industry. After a whole year of bummers I finally find solace in this marvellous film called ‘Vicky Donor’. I must mention that the film was not marketed well but sometime a leap of faith is rewarded well. Written by Juhi Chaturvedi and directed by Soojit Sircar, this tale of sperm donation takes on a topic almost never spoken about in our society while the western hemisphere of the world earns $30 for a visit. And Chaturvedi and Sircar have done a brilliant job at making the topic something that people can now discuss. And all the while they did not forget the sole purpose of cinema – ENTERTAINMENT. I have watched the movie twice and it is one of those few films that are meant not just for a one time watch but for repeat viewings.

The movie opens with a bang, where you are introduced to Dr Baldev Chaddha (Annu Kapoor), a fertility expert whose clinic in Daryaganj is going to the ground due to the lack of good quality sperm. Enters Vicky Arora (Ayushmann Khurana), a punjabi munda with no prospects and a colourful family. To describe the family as colourful is not enough. They are full on Punjabis, teez tarar and complete darubaaz lot who dream loud and talk even louder. The family includes the mother (Dolly Ahluwalia) and the Biji (Kamlesh Gill). In complete contrast is the family of Vicky’s love interest Ashima Roy (Yaami Gautam) who are Bengalis living happily in their Bengali part of Delhi, Chitranjan Park. Despite issues like culture clashes and sperm donation, in the end, the movie is not about anything particular. It is just about how life rolls forward and finding your own space with the craziness around it.

The movie doesn’t have many songs but the few especially ‘Pani Da Rang’ and ‘Rum Whiskey’ are wonderfully used. ‘Rum Whiskey’ which was also used as a promotional video with producer John Abraham, looks a thousand times better in the film where it is used in the backdrop to Vicky’s wedding. The result is magnificent. Watch Mrs Arora and Biji gulp down shots of alcohol while Mr Roy watches in horror and you can’t help but laugh.

Other than the very strong script and hilarious dialogues (the Punjabi and Bengali is used authentically), the film boasts of strong performances by almost everyone. Ayushmann comes across as authentic as a Punjabi munda from Lajpat Nagar can. He is a real find and I only hope that there is more to him than playing Vicky. The other gem in this basket is Annu Kapoor. His performance as Dr Baldev is heartwarming yet humorous and makes your remember how good an actor he really is. Dolly Ahluwalia and Kamlesh Gill as the power ladies of Arora household are who take this movie to another level altogether. A few changes in the casts and probably this film would not have had the same impact that it has now. The female lead, Yaami Gautam, on the other had loses out on the great dialogues. She definitely has a fresh appeal and the fact that she can actually speak hindi does give her a great edge (sarcasm intended) but how good she really is yet to be found out.

If you still have not seen this fabulously delicious combo of punjabism and infertility then don’t waste even a moment in second thoughts. This is a must watch.