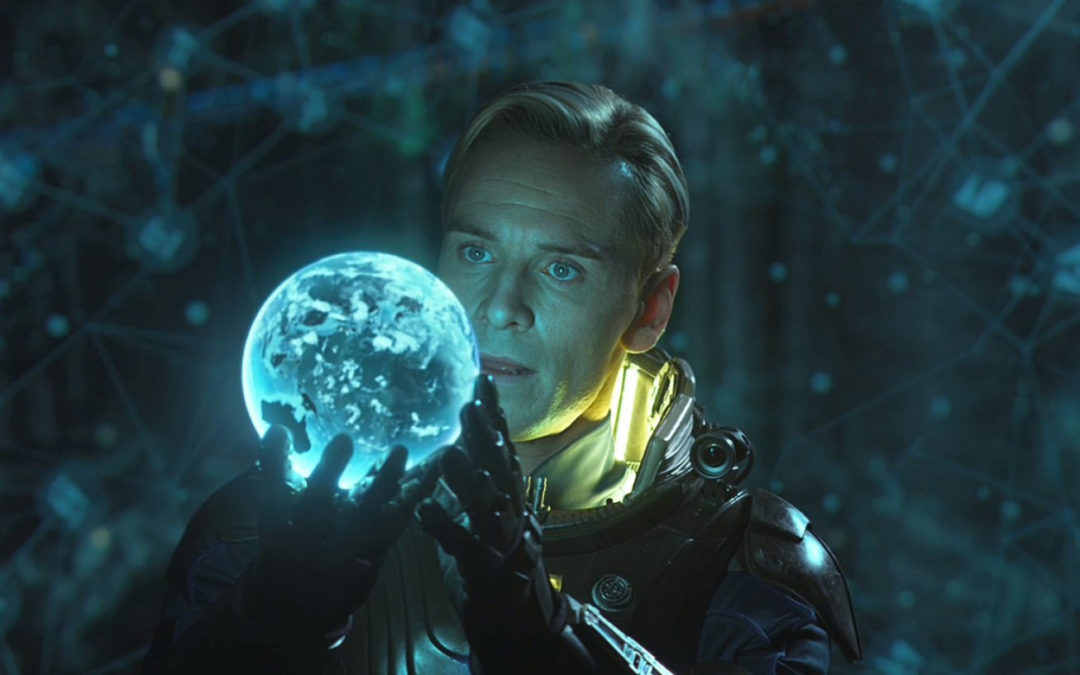 First…. I have not seen Alien. So I am not going to write hundreds of words comparing this film to that, which almost everyone has done.
Moving on, for me watching a film in the 3D format is a complete no-no, since I had a harrowing time watching ‘Avatar’, which I still maintain is a better watch in 2D. That said, I was lured into watching ‘Prometheus’ in 3D purely due to the dirt cheap price of the ticket and the proximity of the theatre to my house. But to my surprise, I rather enjoyed my experience. The flawless nature of the 3 D technology used here surprised me to a great deal. Unlike many other films that are converted to the format quite unnecessarily, here you see the scale the format is actually meant for.
The film is based in 2089, when an archaeologist couple Elizabeth Shaw (Noomi Rapace) and Charlie Holloway (Logan Marshall-Green) discover a star map among several unconnected ancient cultures. They interpret this as an invitation from ‘Engineers’ who they believe to be the creators of humans. Peter Weyland (Guy Pearce), the elderly CEO of Weyland Corporation, funds the creation of the scientific vessel Prometheus to follow the map to the distant moon LV-223. The ship’s is monitored by the android David (Michael Fassbender) and the mission is controlled by director Meredith Vickers (Charlize Theron).
Much of joy of watching the film is derived from experiencing the grandeur of Ridley Scott’s vision. From the first scene where the ‘Engineer’ disintegrates into a waterfall to the point where the ship ‘Prometheus’ lands on the alien land, everything is absolutely breathtaking. But the visuals are not just to awe the audience but to create a sense of intrigue which the crew would be experiencing as they go out exploring the unknown land. The camera almost lingers on the writings on the walls, each nook and corner, making you wonder in amazement as to what are they going to experience.

Charlize Theron has nothing much to do in the film and continues to play the ice-queen (earlier seen in ‘Snow White and the Huntsman’), only much subdued. I would have liked to see a little more of her. Noomi Rapace plays the lead with the strength and sensitivity that she had earlier shown in the ‘The Girl with the Dragon Tattoo’ movies. Her self-operating sequence in the film will be something that won’t be forgotten easily by movie goers. The rest of the crew are just an assortment of actors who don’t get to leave much of an impression, but not because of their fault. Guy Pearce plays the extremely old Weyland for reasons unknown. I am suspecting that he might have something to do in the sequel for it to make any sense whatsoever.
Much of the terror that unfolds in the film is brought on the crew by the mystical David, played wonderfully by Fassbender. The influence of HAL 9000 from ‘2001: A Space Odyssey’ is hard to avoid, but while HAL was quite direct in its approach; David does not go quite the same way. Probably the movie is about the ultimate deterioration of the human kind by its own creation, but only in a manner that does not seem ruthless and aggressive. This is an idea that has been explored too many times in films but watching ‘Prometheus’ you are suddenly exposed to not just one but many enemies, all a side effect of the human agenda.
The fact that there are many loose ends in this film, all probably meant for the sequel to sort out, is probably the one thing that prevents the film from reaching its true potential. If it has been deliberately written as a two part series, a concept that goes well with the money minting ideology of big banners, then I guess that is what brings the film to its ultimate ruin. You expect more from the man who gave us the spectacular ‘Blade Runner’. But that said, I did very much enjoy my journey along with the crew of Prometheus.
Share karo yaar... tumhe filmon ki kasam