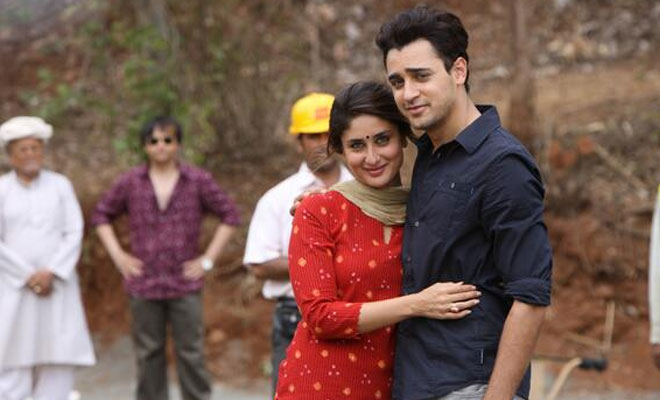 In Hindi cinema, there is not one film. There are two. Pre-interval and post-interval. Films are described in this peculiar fashion of before and after, where the intermission attains almost this Christ like status, a vantage point from where the work is judged.
Before the interval of ‘Gori Tere Pyaar Mein’, I heard myself saying the words, “It’s not that bad. I wish they had shot Bangalore and UB City better, but it’s not that bad.” Yes, Diya’s (Kareena Kapoor) character is half full of shit. Yes Sriram’s (Imran Khan) character is completely full of shit, so much so that I wonder how a half character like Diya’s could stand him for more than a day. But I liked the way that the director had tried really hard to bring about a certain level of authenticity to the households of both characters. Yes, I wondered why all the men onscreen have rooms that look better than my impeccably styled living space even though in reality men wouldn’t notice dirt until it falls from the sky or the fan on their face. Yes I wondered why every female on screen lives in a fabindia/Good Earth/ Mother Earth household that would take the salary of a well paid marketing executive to furnish and yet is shown working in magazines or not-for-profit organizations, some of the lowest paying jobs in the world. Yes, the songs are more forgettable than usual and I wonder when the day is going to arrive when I finally can remember the words and tune of a Hindi film song again. Yes, I wished that we could finally put an end to the whole leading man dancing with hot foreigners in non-existent clubs routine that has been done to death and at least had a catchy song in the background and instead now has complete horseshit songs like ‘Dhat Teri Ki’ which I would not play in my house if someone gave me money to do so. And yet, I said, “It’s not that bad.”
And then the interval ended. The film went south to a deep hole of shit so embarrassing that the Father of our Nation would personally resurrect himself and kill the director, if only he could. The film ended. I went out. I wrote a review, that in my opinion is succinct and entertaining, something the film is not. Period.
Share karo yaar... tumhe filmon ki kasam