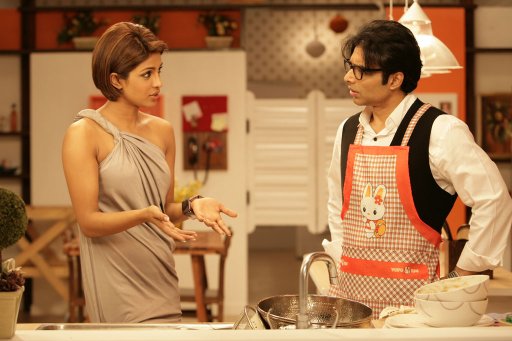 Ok. So Uday Chopra needed a movie. Where he wasn’t playing second fiddle and which starred a female lead that wasn’t intolerable to watch (Tanisha). So how do you go about doing that? Well if your father is Yash Chopra, you just write an utterly uninspiring script and decide to produce. And then ask your best friend (Jugal Hansraj, also jobless after the debacle Roadside Romeo) to direct it.

Excuse the venom pouring out of my fingers but the movie deserves every bit of it. And more. It is a story about Abhay Sharma (Uday Chopra), a geek in love with the hottest girl in the campus called Alisha (Priyanka Chopra). After a freak accident where he saves her life, Alisha leaves the college and Abhay is left with no alternative but to forget about her. Only that he doesn’t. Seven years later, he is still a geek. And still in love with Alisha. The only productive thing he has done is to make a brilliant operating system Unity which he then loses to a con artist called Varun (Dino Morea). In search of this guy, he travels to Singapore and accidently comes across Alisha again who, now is a single, divorced mother, a phenomenon Priyanka Chopra mentions on every given opportunity to everyone she meets. He ends up being a nanny to her child Tanya, then win over her affections, and overtime win over Alisha too. Not to mention get the rights of his software back (done in the last 10 minutes) and then live happily ever after. A special mention to Anupam Kher who plays Abhay’s father and has almost no role in the entire movie. Why would they give dialogues to someone who is actually talented? Doesn’t go with the plan.

Well, where do I start? Hmmm…I am not even going after the very obvious – average storyline and pathetic direction. Not to mention the mind numbing dialogues like “O my god! You are such a loser”; “So whats the gos Froggie” among others. Priyanaka looks good in her micro minis and shorts (also doubling as office attire) but is really irritating in her role as a single, divorced, hot mommie. She barely acts as a mom, with not an iota of maturity shown on her part for the audience to believe that she is the mother of a 6 year old girl. Her duties remain restricted to procuring new nannies and chit chatting with them about her love life while moisturizing her legs. Not to mention, what’s with the accent? The kid is even more irritating than her, somehow making me believe that both of them are genetically related. She is supposed to be a menace maker but all she comes across is a dumb girl who has been made to learn all the ‘supposedly smart’ dialogues. To add to this is Dino Morea who is constantly hitting on Alisha and the mutual flirting between the both of them made me actually puke inside my mouth. In comparison to all this Uday Chopra actually comes across as genuine and somewhat likeable as the loser with a heart of gold. I did wonder though, as to why he wasn’t so much concerned about the stolen software during the length of the movie, instead wasting his time babysitting and smiling at Alisha.

The best moment in the entire movies remains a scene between Tanya and Abhay where she tells him that her mom is definitely gonna fall for Varun cause generally she falls for jerks like him. The only good thing about the movie is the characterization of the main leads. Alisha is somewhat of a hypocrite, believing that she is an unbiased, non-judgemental person and takes people for what they really are when she always acts otherwise. Abhay on the other hand knows better but is just scared of doing what he wants. At the crux of it, the movie is just about two people finding love, a story that has been told over and over again. The premise of a beauty and a geek, though not original, isn’t that bad either. It’s just that the direction sucks! Period. The story is not told well at all. It slacks throughout, the characters are there but the sub plots linking them are sloppy and uninspiring. The music by Salim-Suleiman is hummable and the only good thing about this debacle.

Save yourself the mistake of donating the 50 – 200 bucks that would cost you to watch this disaster. Donate the money to charity instead!