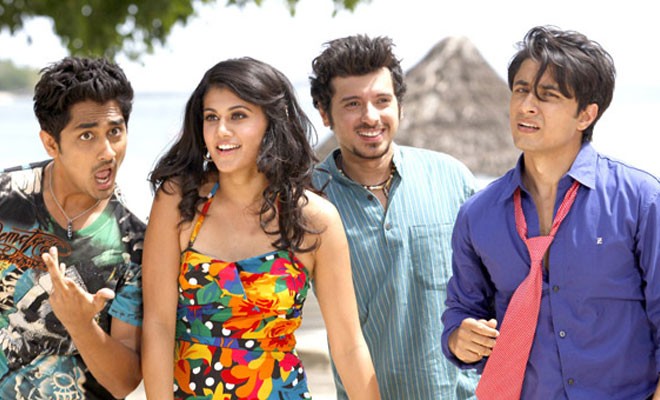 I am not writing this review as a pious old woman who finds the remake business filthy. Yes, I have seen ‘Chashme Buddoor (1981)’ and I thoroughly enjoyed it not because of the nostalgia factor but because it is actually an endearing film which can stand the test of time. The same unfortunately cannot be said about this David Dhawan comedy.
Chashme Baddoor (2013) suffers from a couple of serious issues which has made this ‘could have been good’ film into a ‘no one will remember it’ film. I watched it on a Monday morning with a crowd of young college students who had obviously come to have a few laughs and waste time. If that is the intent of the film then it does completely fine, and often makes me wonder if comedy clubs were a little cheaper and had better seats, would anyone show up for these films? You get the same thing in both places – funny one liners and a bonus of ‘no songs’.
The new film essentially is the same story. Three men, two vela laffandars, Jai (Siddharth) and Omi (Divyendu Sharma) and one padhaku good boy Siddharth Kashyap (Ali Zafar) live together. Omi and Jai try their luck at a new girl next door Seema (Taapsee Pannu) and despite their utter failure, invent stories of exaggerated success as young boys often do. And eventually when Siddharth gets the girl the other two, misjudges the girl’s character and tries to end the relationship.
Misunderstanding, judgement and man-bonding are classic scenarios on which films can be made at any age. And on top of that, the inspiration was modern enough to avoid any major changes in the story. If anything the new film is quite old fashioned, with both the leads being expected to have an arranged marriage at a considerably young age. Marriage was not even on the cards when it came to the 1981 classic, with Neha’s (Deepti Naval) father confidently saying ‘yeh toh abhi bacchi hain’ at the suggestion of marriage. But in the new film, the writers and director try to pseudo modernize the story with the use only smaller clothes for the leading lady. So that is all that has changed in the last 30 years?
I could dedicate a paragraph on how utterly horrendous Taapsee Pannu is in the film. She is made out to be free-spirited young girl but instead just makes my face wince every time she mouths the dialogue ‘Dum hain Boss’. She is neither charming, nor cute. And I know I am a woman and that apparently does not give me the right to comment on an actress’s hotness but making just anyone wear shorts does not make them hot! For the nth time, are there no somewhat good looking women left in the country that we have to watch the likes of Pannu for 2 hours on a big screen? Ali Zafar also unfortunately does not fare well either. While he does have some charm and can mouth lines, he fails carrying out the role of shy, goody boy who is too scared of even kissing his girlfriend. What century is this?
The only saving grace of this utter disappointment of a movie are Siddharth and Divyendu Sharma, thanks to the cheesy but effective one-liners and Shers written by Sajid – Farhad. They are the only thing that keeps this train wreck moving on. Last but not the least… Why add insult to injury by making Rishi Kapoor a tattooed sailor, wooing an aging Lillette Dubey?
I know the attraction of remakes. I have loved many but modernizing a tale does not mean killing its soul. While the college students sitting next to me got their 70 rupees worth of entertainment, it still saddened me that most of them would never know what the real deal was.
Share karo yaar... tumhe filmon ki kasam