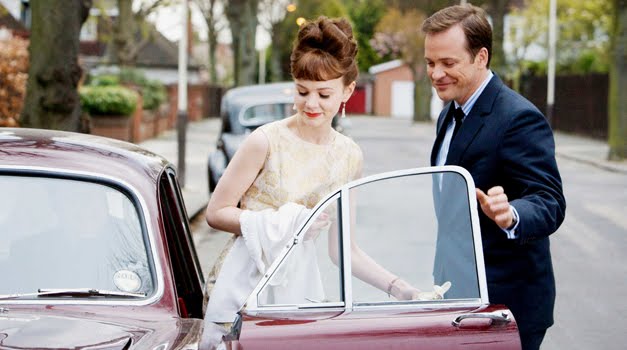 In movies related to adolescence more often than not, the characters are categorised as either good or bad which leaves out the majority of youngsters who actually exist. ‘An Education’ treads this fine line between nice and trash, through the story of a 16 year old girl Jenny. Jenny is smart, one of the brightest in her class, she wants to get into Oxford. But she wants more from life than she already has. She wanted to experience life. Real, breathing, exciting life which in her mind was full of French movies, smoking cigarettes in public, listening to French music and eating exquisite food in fancy restaurants. That’s what she really dreams of and Oxford was her way to get to that life.

Jenny’s life is pretty mundane till one rainy afternoon she meets a stranger, David. David is an older man, almost twice her age and offers Jenny everything she had ever dreamt of. He slowly engulfs her into his carefully guarded world with concerts, fancy restaurants, Paris trips and also some secrets. And he does it smoothly, charming her parents who don’t even realise what had hit their family. And Jenny even though at some point figures out that everything is not perfect goes along with everything for she was not done with that world. She continues because she wants more from the situation including losing her virginity. This however never really becomes the centre of the movie.

The brilliance of the movie lies in the careful characterisation of Jenny. You never know if she is going to slip into this magical fairyland with great clothes and fancy people and not ever recover herself back. And while watching the movie you see her as a teenager who is not aware of everything that’s happening to her but also is strong enough gets her life together when she hits rock bottom. The movie is not about a wronged woman but as the title suggests, about education, something that life provides you.

Carey Mulligan is great as Jenny. She is bright, lost and still has that spark that separates her from the rest of the population. She brings about the complexity of a 16 year old girl wanting more from life. Alfred Molina plays Jack, Jenny’s father. And is a brilliant at it. He is stuck up, stingy and yet so funny at times that it reminds you of your own family. David’s role is played by Peter Sarsgaard and he is everything that the character is. Charming and smooth he plays David to the hilt but it’s the presence of Jenny around him that makes the character even more believable.

The movie belongs to Nick Hornby who has written the adapted screenplay and director Lone Scherfig who do justice to the story of a 16 year old in 1960s suburban London without making it melodramatic even for a minute. Highly enjoyable, An Education is something you will definitely relate to if you ever dreamt of so much more than your life offered you during school. It’s a coming of age movie and how life experiences, good as well as bad are there to educate and not destroy you.

Watch this movie … it will definitely brighten up your day and remind you of the times that you were 16 and oh so naive sometimes.