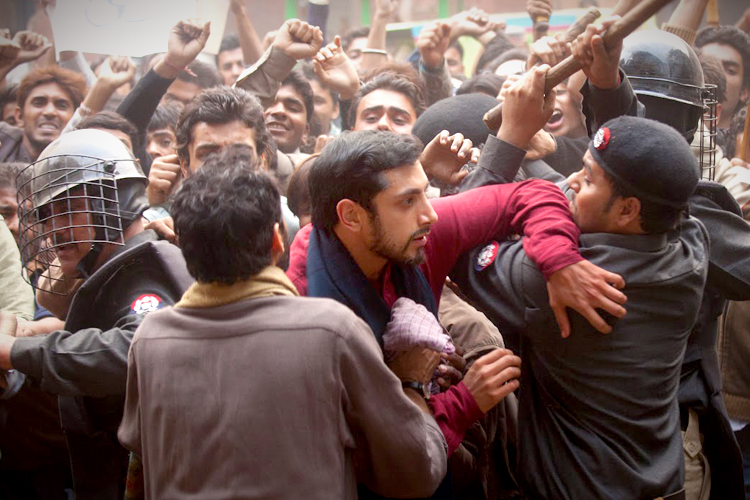 It is hard for me to write reviews for films that strike a chord with me on a personal note. So I will refrain from pretending to write a review for Mira Nair’s new film ‘The Reluctant Fundamentalist’. The following are just some of the many thoughts that were racing in my mind after I left the theatre, quietly.
The subject matter of Nair’s new film unlike many other post 9/11 films is much more complicated. It’s not so about xenophobia, the reverse prejudice and even terrorism that was faced by many but more about the germ of distrust that resides ever so silently inside our brains. This germ takes many forms, many of which we see outside today so massively changing the course of the world. It’s not about appearances. And it’s not a blame game where two extreme groups of people raise a war. Those are extremely external and somewhat bookish facts that don’t necessarily demonstrate the reasons behind those very changes. This film uses the very personal journey of a character to demonstrate the change and what others may perceive that change to be.
One of the reasons I particularly dislike films made by foreign settled directors is the complete ignorance of the one thing that makes a place what it is. Language. It was one of the primary reasons I hated Deepa Mehta’s ‘Midnight’s Children’. But in Nair’s film language is used beautifully and superfluously to demonstrate and enhance each character. No one feels out of place, especially not the audience.
The film is made with a lot of heart. It is not an agenda film, despite its subject, which is a feat very hard to achieve. One of the triumphs of the film is the brilliant cast of people including the very capable Riz Ahmed who fits into the character of Khan perfectly. He is as much of a sight in the towering skyscrapers of Manhattan as he is in the streets of Lahore. He is ably supported by the small supporting roles by Om Puri, Shabana Azmi, Kiefer Sutherland, Imaad Shah, Chandrachur Singh among others. The two other major roles are played by Liev Schreiber and Kate Hudson, as Erica, Changez’s love interest. Hudson is much different than the movie going audience is used to seeing her, but lacked the punch that probably was required to make Riz’s relationship feel powerful. The music by Michael Andrews is very beautiful and a treat for the ears.
Even though the initial setting of the film is based on violence, it is not a thriller. It could have very well have made out to be in the hands of someone else. But in Nair’s hands, it comes across as a slow introspection of life not only by the protagonist Changez Khan (Riz Ahmed) but also Robert Lincon (Liev Schreiber), the reporter listening to him. The same could be said about the audience, if they are willing to watch the film without any previous judgement, just as Changez asks of Robert before starting to narrate.
Share karo yaar... tumhe filmon ki kasam