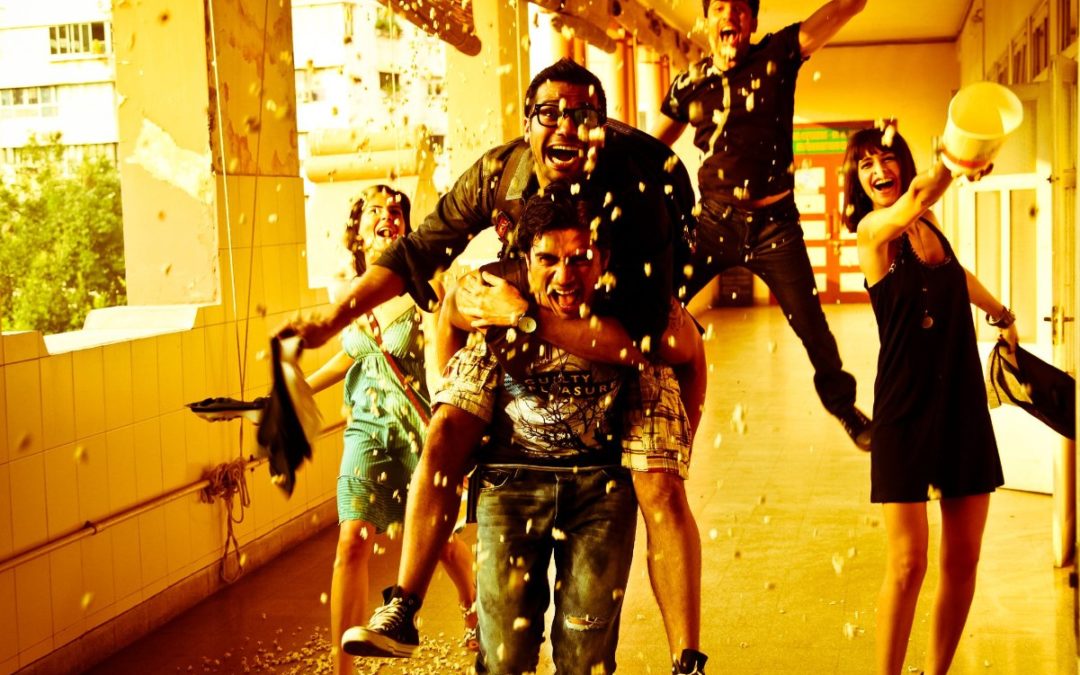 ‘Khoya Khoya Chand Khula Aasman, aankhon me sari raat jayegi…’, These are not the words that you would imagine playing at the backdrop of a gunfire and murder but it is moments like these when Bejoy Nambiar’s ‘Shaitan’ finds its voice.  The movie operates through chaos, an instrument that leads to unaccounted destruction and madness in the movie.
The protagonists of the movie are a bunch of delinquents with relationships bordering from dysfunctional to even crazy. Amy (Kalki) is a mentally disturbed girl deeply affected by the attempted suicide and eventual institutionalization of her mother. After moving to Mumbai she meets KC (Gulshan Devaiya) who introduces her Dash (Shiv Pandit), Zubin (Neil Bhoopalam) and Tanya (Kirti Kulhari). The first 30 minutes go in this haze of alcohol, parties and drugs, accompanied with psychedelic colours and music, it all coming to a end with a road accident. Shocked out of their minds, the bunch behaves as they are expected to, trying to cover their tracks and failing miserably at it. Traced down by a dirty cop, they are asked for 25 lakhs to make the case go away paving the way to more destruction. Fake kidnapping, flying tempers, confused police force and an angry cop finally leads to an end which is as depressing and yet as poetic as life is.
The role of music, camerawork and editing cannot be dismissed in this thriller. Prashant Pillai, Amar Mohile, Ranjit Barot and Anupam Roy catch the pulse of the youth in the first half and the chaos in the second half and come up with a music score which uplifts the movie. Cinematography by Madhie is fresh and keeps pace with the various methods of storytelling employed by Nambiar. The movie is edited well by Sreekar Prasad, keeping it sharp and fast.
Among the actors, everyone does alright. Everyone serves their purpose, acting out a cliché with poignancy I might add but not really packing a punch. Noone except for Rajeev Khandelwal and Neil Bhoopalam actually catch your attention among the young cast. I wish Kalki was given a meatier role though! Khandelwal’s angry cop makes you sit up and take notice of this actor who has been majorly underutilized in the industry and has to waste time playing ‘The moment of truth’ on tv.
Megha Ramaswamy and Bejoy Nambiar definitely have done their work well but the one thing I really missed was a bit more of characterization. An ensemble cast does limit what you can do with each character but the disturbed background of Amy was given much more time space than it actually required and finally failed to make an impact in the last scene. That apart, ‘Shaitan’ is a director’s movie from the first scene. Nambiar does a great job at telling the story, which as depressing as it it, still gives you some time to breathe and enjoy.
The movie, which is inspired by real incidents, is bears close resemblance to producer Anurag Kashyap’s unreleased and jinxed project ‘Paanch’, which was also made on a similar storyline. While Kashyap maintains that this is far superior to what he had made, watching ‘Shaitan’ I really wondered as to when the world will finally get to see it.
Share karo yaar... tumhe filmon ki kasam