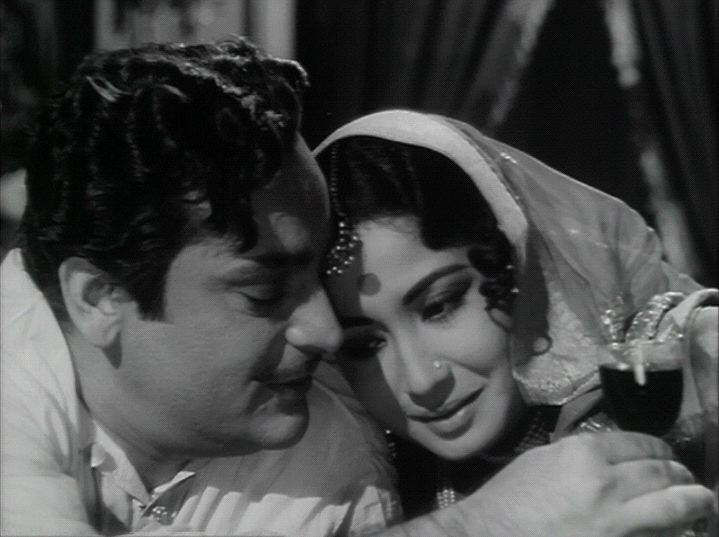 It’s been decades since the movie was made but yesterday when I saw it for the first time I realised why it’s called a masterpiece.

Sahib Bibi aur Ghulam is about a woman starved of attention from her husband. The story is told through the eyes of Bhootnath (Guru Dutt), a young man who arrives at a grand mansion of the Choudhury’s to live with his brother-in- law and also look for work. He manages to finds work at a factory where he always finds himself at the receiving end of the employer’s daughter Jabba (Waheeda Rehman).

The main plot is of Choti Bahu (Meena Kumari) who is married to the Chote Sahib (Rehman) of the Choudhury family. Chote Sahib rarely spent any time with her, finding her too plain for his own taste, preferring a local dancer-prostitute. Starved of attention and extremely lonely Choti Bahu asks Bhoothnath to procure a sindoor manufactured in his factory, hoping that it would change her husband. Her relationship with Bhootnath remains platonic, where she looks at him as a confidante. Bhootnath on the other hand, is completely mesmerised by her, looking up to her as an elusive being. Her presence for him is almost like that of a fairy or an angel. This is something that always makes Jabba a little jealous of her, also making us aware of her romantic feelings for Bhootnath.

The movie was revolutionary because of the characterization of Choti Bahu as a strong yet mentally devastated woman. She didn’t want to be categorized as ordinary, like the wives of the rest of the Choudhury brothers who spent their time making jewellery and in an attempt to prove that lets go of her moral values to please her husband. This is something that haunts her throughout her life and maybe one of the reasons she turns into an alcoholic not being sober ever. In a moving scene between her and her husband, she tells him that she is willing to go to any lengths to be with him and that she is not simple as he expects her to be. This is when he challenges her to drink which she eventually takes up. What is moving is her maddening obsession for her husband, something that is visible throughout. In the last scene between them, she moves out to travel to another city for blessings for her husband’s recovery. Before leaving, she touches his feet, puts the saree cloth on her head and tells him that she would return soon. Throughout the scene, she is completely drunk.

There is a lot that is said through this movie. From the downfall of the zamindars in the British raj, to the status of women in the society, to the prevalent caste system; all of these remain in the background providing support to this tragic love story. In a way, the magnificence of the Choughury’s was almost like the beauty of Choti Bahu who goes from being a pious, beautiful woman to an alcoholic who sells her last piece of jewellery to buy alcohol.

The movie is a masterpiece. An adaptation from Bimal Mitra’s novel of the same name it is flawlessly directed by Abrar Alvi and produced by Guru Dutt. The music by Hemant Kumar remains timeless with songs like ‘Na Jao Saiyan’, ‘Piya Aiso Jiya Mein’ and ‘Bhanwara Bada Nadan’. All of them are not just fantastic melodies but also apt for the situations taking the scene to another level altogether. I have to point out the cinematography by VK Murthy. He captured the pain and beauty of the story through the face of Meena Kumari like it never had been before. It can be seen in the scene where you see Choti bahu for the first time, where the camera follows Bhootnath’s eyes as he enters her room.

The quality that differentiates timeless cinema from hits is the fact that it remains relevant whichever age it may be seen in. This movie is a masterpiece, a tragic and moving story, in some way reminding me of Devdas. Only that Devdas turned to alcohol to forget his love and Choti Bahu took to it to attain what she thought was love.

Watch the movie for everything that cinema stands for. Moving performances and great script, it was not just about a story about the bygone era but the story of a woman, who may as well be present today. Someone willing to go to any lengths for love even if it meant losing everything she held dear.