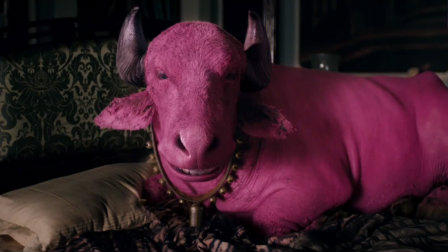 “‘Matru Ki Bijlee Ka Mandola’ could be the ‘Andaz Apna Apna’ of our times,” said my friend as we watched Harry Mandola trying relentlessly to drag a well to a cow. I am not sure about the comparison but I have to admit that the film is filled with a lot of ridiculously hilarious moments. And all thanks to Pankaj Kapur who takes on the skin of Harry Mandola so well that as the audience I was overwhelmed beyond words. Also, Bhardwaj does more than his share to supply dialogues which will make you roll on the floor with laughter. Sample this classic:

Both the fortunate and unfortunate thing about Vishal Bhardwaj’s delicious new film is the fact that Pankaj Kapur plays the titular character of Harry Mandola. Kapur is so brilliant in the two vastly different roles of drunk and sober Mandola that everyone else in the film, including Shabana Azmi just looks bad in comparison. Nonetheless, I will not nitpick and recommend the film to everyone, if only it is to enjoy Kapur’s performance.

The film’s very obvious weak point is the screenplay which moves very ambiguously through its various characters and their conflicts. What lets it down is the fact that we never know why the characters are the way they are. As to why Harry Mandola turns to alcohol, who is Matru and why is he a revolutionary and what exactly is Bijlee’s deal in life are questions which are left hanging in the air and never answered. The blame is to be shared by writers Bhardwaj and Abhishek Chaubey who in the past gave us the half baked plot driven home only by performances in ‘Ishqiya’. The screenplay looks like the first draft of the project written down without taking into consideration the general tone of the film. While the film is hilarious, I am not sure whether it was meant to be since one of the primary issues is the relevant problem of land extortion from farmers in Haryana. Alcoholism comes in a close second but the only moment it is given a serious thought is when Bijlee turns to it in her lowest moments, using it to avoid reality. The editing by A. Sreekar Prasad is not as strong and that along with the screenplay makes the film seem confusing. If you are high, it will not matter. The fact that Kapur is high most of the time, makes it easier on us. Empathetic viewing I guess!

Among the actors, everyone tries really hard. Imran Khan (Matru), Anushka Sharma (Bijlee), Shabana Azmi (Chaudhari Devi) and Arya Babbar (Badal) all do their bit to act Haryanvi, goofy, dumb or mean and I felt genuinely bad for all of them as the film ended. Yes, they are all good but the actor they say their lines with or to, is so far beyond brilliant that they all fade in comparison. The only one who lives up to his potential is Arya Babbar who looks very believable as the dumb boyfriend of Bijlee. Look at him dancing with the African dancers and you will get my point. So while Kapur takes the Gold medal, the rest will have to be happy with a participation certificate.

The music by Bhardwaj is another high point of the film. It is close to the roots and it works well for some parts of the film. My favourite from the bunch is the funky ‘Oye Boy Charlie’ and the soulful ‘Badal Uthiya’. But somehow, not all the songs merge well with the visuals on the screen and often don’t have the impact they could have.

The film has tremendous potential, but instead of being a beautiful black comedy about the horrors facing the Indian farmers it turns into a slapstick comedy about Harry Mandola and Gulabi Bhains. I agree that even that seems very funny but you can’t kill a girl for wanting more.