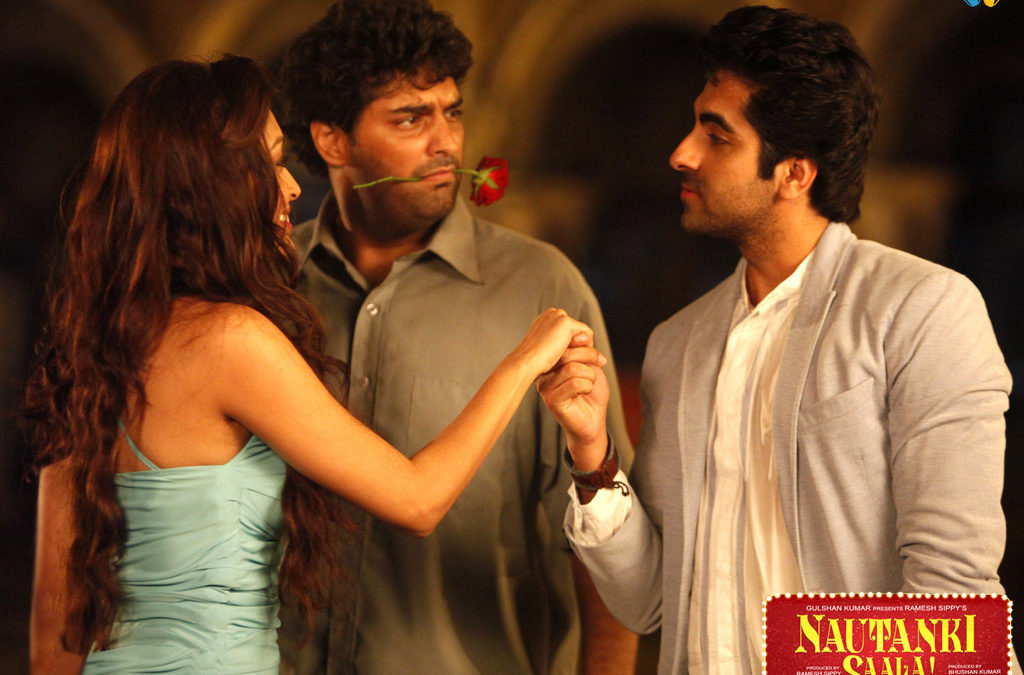 Roshan Sippy’s latest offering ‘Nautanki Saala’ is an official remake of the French film ‘Apres Vous’. The film’s story revolves around RP Ram Parmar (Ayushmann Khuranna), a successful theatre actor/director with a hit show called Ravanleela. One night he ends up saving a stranger, Mandar Lele (Kunaal Roy Kapur), from committing suicide. The lonely and confused Manadar, ends up living with RP who goes out of his way to put his life together, and only ends up unraveling his own. There are also three women to give company to the men. Pooja Salvi plays Mandar’s ex Nandini Patel, Evelyn Sharma as the stage Sita and Gaelyn Mendonca as RP’s girlfriend.

I did not go in the theatre with any expectations, primarily because I could not understand the teaser that I had seen a couple of days before. I knew that it was supposed to be a comedy but I could not understand anything else. In a way, it worked well for the film because it not only borrows the story from the French film but also the pace. Moving at a leisurely speed, it lets the audience sink in the city of Mumbai, craftily shot (cinematography by Manoj Lobo) without the crowds and the dirt. It is a tone that you don’t often come across in Hindi films and I quite enjoyed it. And I enjoyed the humour, which was neither dirty or slapstick but just charming. There are no pedestrian background sounds or double entendres to make us laugh. Instead we are allowed to decide the time our lips break into a smile. And that is refreshing.

The film belongs to Sippy for putting together this world. While Ayushmann’s RP is the usual successful, commitment phobic young man, it is Kapur’s Mandar who takes the cake. Completely lost and confused, he is hard to dislike. Watch him giving the audition for the role of Ram and you cannot help but laugh out loud. Kapur and Khurrana are the real couple in the film, complementing each other perfectly and with a chemistry that lights up the screen. There is also Ram’s producer Chandra played hilariously by Sanjeev Bhatt and the hospital receptionist Sheela Das, who give the film some of its most funny moments. I was thankful that the remix ‘Dhak Dhak’ and ‘So Gaya Yeh Jahan’ were not used during the film and only as a background scores. I am not a fan of remixes but when used aptly, they can do wonders for the film.

I thoroughly enjoyed almost all of the film except for two things. The songs and the two men’s love interest Pooja Salvi. To give Sippy some credit, Salvi’s character is somewhat believable as a woman who cannot stay alone and has to have a man in her life all the time. ‘Yeh nahi toh who sahi’ is her mantra, but what is RP’s angle? All through the film, I kept wondering as to why RP fell in love with Nandini. I refuse to believe that a single kiss can be that spectacular. The ever confused and ‘oh I am so lonely’ expression together with the ‘not that great’ dialogue delivery made me want to smack her face every time she came on screen. It did not help that almost all the songs were also picturised on her. The love angle stretches on a bit at the end making for the weakest part of the film. I cannot believe that in almost all of my reviews of Hindi films I just end up complaining about the leading actress but I just cannot help it.

I am not sure if everyone would find it funny but watch it for a different kind of humour that is very much missing from the Hindi films.