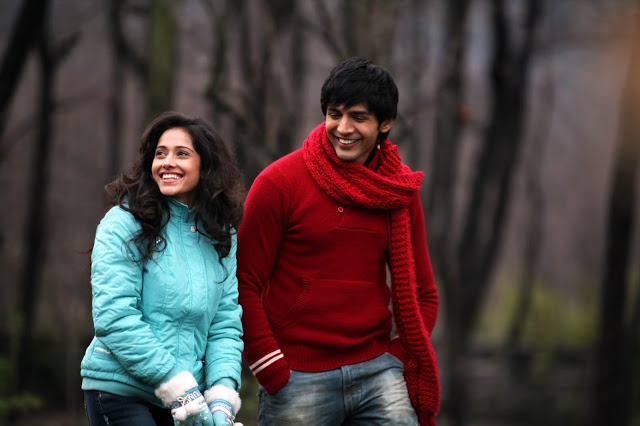 This film is long. It could have done without at least 20 minutes worth of songs. But putting that aside, this film talks about many things that mainstream filmmakers rarely touch upon. ‘AkaashVani’ is a preview into the life of our generation. A generation that firmly believes that issues like ‘caste’ or ‘society approval’ or ‘XYZ’ are no longer an issue but are blindly ignorant to their own parent’s thought process. I was reading a book recently where the author spoke about how, while she struggled for freedom of choice in her marriage, she assumed the coming generations would reap the benefits of that struggle. But she was surprised to find that under the ‘Cool’ façade most young people still preferred their parent’s contentment over anything else.

The film’s story is like that of many-many couples that I have seen. Having dated through college, they are not able to sustain the relationship struggling to find a voice in them to speak their hearts to their parents. Circumstances may differ in each household, but one person always calls it quits, stating that they love their parents too much to hurt them.

In the film, Vani (Nushrat Bharucha) also faces the same pressing issue and buckles under the pressure of what I call the oldest blackmail of all time – The Child’s burden. You hear your mom-dad stating that they have spent their entire life on you, paid for your education, got you clothes, taken you to holidays and you feel like a monster for wanting to marry the person of your choice instead of an IIT-IIM pass out. No one stops to think that it’s the parent’s job to do all that they did and no sacrifice is worth your own life. Akaash (Kartik Tiwari) on the other hand faces the fate of a dejected lover who cannot understand how someone can throw away a relationship over a phone call. No amount of alcohol or work would drown out the sorrow of a broken heart. At least not soon enough.

The film is long. Yes. But so is life, and writer- director Luv Ranjan uses every possible frame of the film genuinely to bring about both the joy of being in love, the pain of a broken relationship and the torment of a dead marriage. Issues like ‘self-esteem’ of the woman in a marriage, the subtle mental, emotional and physical abuse which goes unnoticed in our society and of course the role of the parents after the girl is married are brought up but without the usual melodrama which I have often seen them as.

The character of Vani is played wonderfully by Nushrat Bharucha, who brings out the nuances of a teenager, a woman and a victim in a bad marriage believably. The fact that Ranjan lets her fight the battle she faces instead of letting Akaash fight it for her like a ‘Knight in shining armor’ is the biggest triumph of the film. Kartik Tiwari, plays a winning Akaash in the first half banking on his Colgate smile and charmingly funny and dirty dialogues. But the couple of scenes where he is allowed to delve into real emotions and anger, he does so too, showing the promise of the famous ‘woman-rant’ scene he delivered in ‘Pyaar ka Punchnama’. The music by Hitesh Sonik is good but except for ‘Bas Main Aur Tu’ I did not particularly like the timing of the rest of the songs.

The film belong to the writer-director for picking out a topic so intense and doing justice to it, without being tempted into either dialogues or characters which would make this film banal and melodramatic. I wish all the parents would go and watch the film, if not the youngsters themselves because it reeks of our culture, and shows the great cultural divide that is present in most homes that we ignore every day.