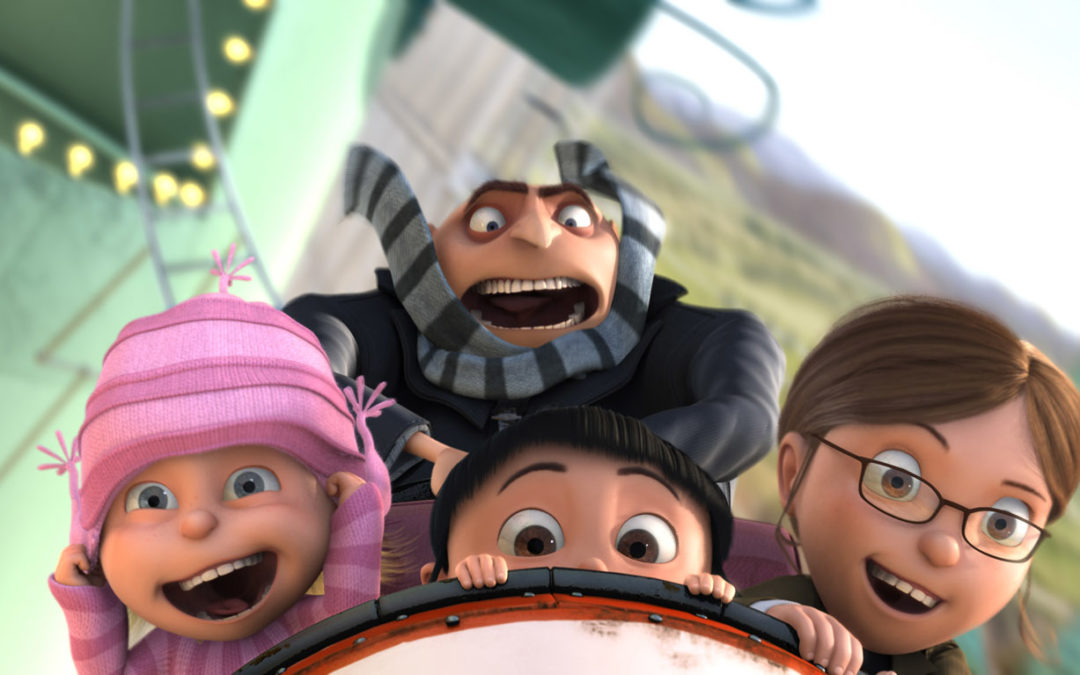 I don’t know what is it about animated kids but they are just totally adorable. Animated movies have a special place in my heart. They remind me of the long gone days of childhood when even silly things like a Unicorn would bring a smile to your face and stupid bedtime stories were the best way to end the day.

Despicable Me is one of the cutest films i have come across since Up. It’s not as good as the later but it is still a wonderful joyride. The movie is about Gru (awesomely voiced by Steve Carell), a superbad super villain who is planning the biggest heist in the history of the world. To steal the moon. Armed with almost everything needed except for the support from the bank, he faces competition from a younger villain called Vector (Jason Segal). And all that remains between him and the moon is the shrink gun which was stolen from him by Vector.

In an attempt to get the gun back he adopts three little girls named Margo, Edith and Agnes, who were supposed to gain him entrance into Vector’s house. But parenting is a tough job especially when you are dealing with little girls who go for ballet recitals. So the tough love Gru, finds his time sitting in ballet recitals, reading hideous bed time stories and going for reaaly scary (it looks damn scary even on screen) joyrides. And in time the girls find their way to his heart, as they to yours too. Each of the girls is different. While Margo is the more mature eldest one, Edith is the sarcastic tough cookie but the one who will truly take your heart away is Agnes, a unicorn obsessed kid who reminds you of how easy it was to love people when you were a kid.

Despicable Me works because of it’s well sketched out characters, a cute storyline and the chemistry between the various character on screen. A special mention needs to be made of the ‘minions’, which are tiny yellow peanut-shaped humanoids which work with Gru and Dr Nefario (Russell Brand). They are hilarious and are voiced by the directors Pierre Coffin and Chris Renaud themselves. Steve Carell excels in his role as Gru with his part spanish, part ‘God knows what’ accent and the girls, especially Agnes is just a show stealer.

Go and watch the movie while it is in theatres. It will surely give you moments to cherish.