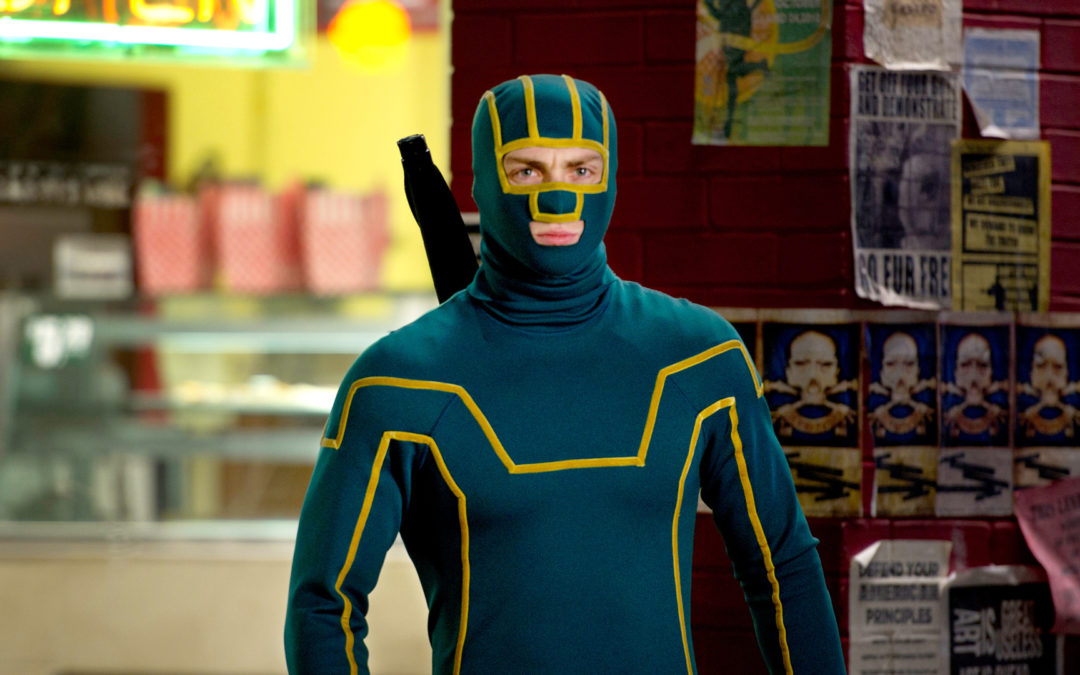 It’s been a long time since i had so much fun watching a movie. Kick-Ass, sure kicks ass big time. The movie which was released earlier this year never saw the light of the day here, I am assuming mostly because nobody really want to release a R rated superhero movie. Kills majority of your audience.

It’s a story of a normal kid who decides to become a superhero and in the process realises that it’s not a comic book world out there where everything ends well. Especially if you have no superpowers and no skills whatsoever. The movie has Dave Lizewski (Aaron Johnson) play Kick-Ass, a superhero he invents out his bored life and fascination for comic books. In an attempt to actually fight crime he accidentally gets caught on camera fending of a gang who were beating up a guy and is hailed as a the ‘it guy’ by everyone. Happy with his new found popularity he doesn’t realise the mess he is in because the crime boss of the city, Frank D’Amico (Mark Strong) thinks that he is killing his men and thus wants him dead. In a separate plot you meet ten year old Mindy/Hit Girl (Chloë Moretz) and his father Damon Macready/Big Daddy (Nicolas Cage) who are the actual crime fighters in the city and are killing D’Amico’s men.

There is a lot that happens in the movie, including a lot of violent bloodwork. The movie is based on the comic book of the same name by Mark Millar and John Romita, Jr. The film is directed by Matthew Vaughn, has a definite punch to it. I wouldn’t want to really think too much, something that many might, considering the amount of profanity on screen which seems too much because it all comes out of a ten year old child. She is the real star of the show, even though the movie is named Kick-Ass and while we may argue endlessly about the deliberate violence and abuse of childhood, all I really saw was the fact that Chloë Moretz has a bright future ahead. Someone who can steal the limelight away from Nicolas Cage has to have something.

Don’t go in expecting a normal superhero movie where spidey always saves the day and is never ever beaten up. You will be disappointed. This one is as bloody as any Tarentino flicks, only it’s also the good guys who get thrashed some times. Matthew Vaughn, tries to create a mix of the real world and funny comic book scenarios but it would have been better with only one. The movie works mostly because of the stellar performance by the lead cast. Aaron Johnson, is perfect as the gawky teenager but it is Chloë who steals the show.