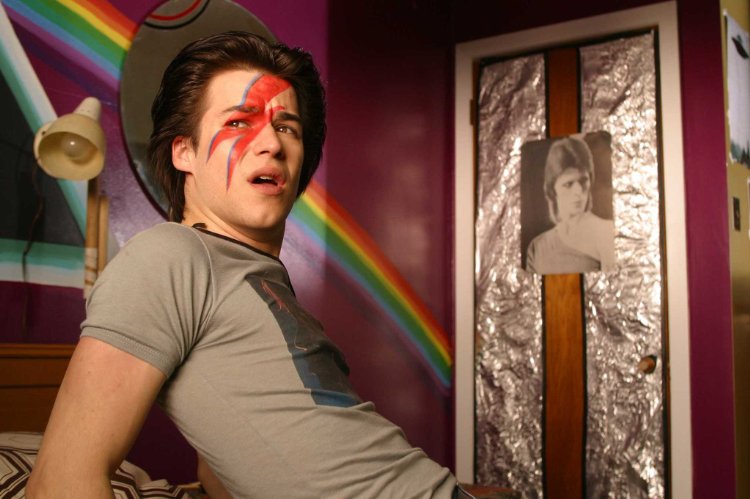 I saw the movie about three weeks back but as I sat to write about it today, I realized a different angle to the name. After all, the word ‘crazy’ aptly described the dynamics between the various members of a family irrespective of the nature of the problems.
‘C.R.A.Z.Y’ is a French-language Canadian film which is sensitively and yet entertainingly tells the story of Zachary Beaulieu (Marc-André Grondin), the second youngest son of a family with 5 sons. The story follows the life of Zachary from the time he was a young boy and only beginning to realize his homosexual tendencies till the point his heteronormative father Gervais Beaulieu (Michel Côté) finally accepts him as a gay man.
I know that the premise sounds very serious but where this movie stands apart is the fact that it is highly engaging. The movie’s primary storyline remains the tension between the father and Zachary but there are many other stories that are told along with it, each of them being equally important and all told with as much integrity as the first one.
The story of Zach is told though Émile Vallée, who plays him at age 8 and later by Marc-André Grondin who grows from a being a teenager to a man. And all through this change, we witness a slow separation between him and his father, because over time it becomes difficult for the father to avoid the truth that stares him in his eyes. The fact that his sperm could give birth to a homosexual is something of a cold shock to the man, who prides at having fathered 5 sons. But as complicated is this hide n seek between reality and a fake sense of being is, the story does not just revolve around them. Equally important is the relationship he shares with his four brothers, each of whom has their own quirks. The toughest among the lot is Raymond Beaulieu (Pierre-Luc Brillant), a drug addict who leaves no opportunity to make Zach’s life miserable. All is done in a brotherly fashion but it does get crazy beyond belief at moments. One of the best moments of the film is at one of the Christmas’s parties (also Zach’s birthday) where everything starts out magically as Christian (the oldest brother) announces his engagement and ends with a brawl with broken glasses and tables, where Raymond is tied down by the three brothers as he shouts and abuses Zach. And yet nothing changes. Family remains family.
The bond between Zach and his mother is the strong backbone of this movie. She remains his angel as is he to her. She plays the role of the mother of 5 very different boys and the wife of a stubborn yet loving man with such dignity that you almost forget that she is an actor. The movie plays out in front of your eyes almost like the world seems when you have lost your senses. There are no dramatic moments. There is no shooting high. Just like life, everything is painfully slow and unexpectedly moving. When you almost certainly believe that Gervais would accept Zach’s way of life because of an extraordinary gesture he made, he disappoints you with an explanation that you already know of. And when you have finally lost hope…it decides to give life one more chance. Directed and co-written by Jean-Marc Vallée, the movie is a beautiful story of a family, the pains of growing up, changing, evolving and the fact that the bond of blood …. however crazy, sometimes is the only thing that keeps us human.
Share karo yaar... tumhe filmon ki kasam