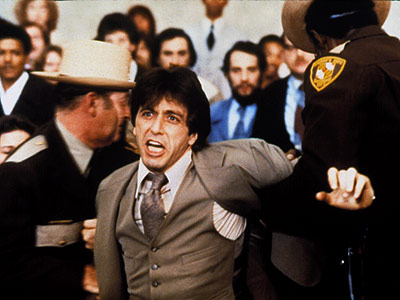 …And Justice for All, is a movie about the fallacies of the legal system. A system which everywhere was based to uncover the truth but as Arthur Kirkland (Al Pacino) in the movie rightly says in the end became all about winning. No one cares about the truth as long as you win.
A drama about the intricacies of the legal system, it shows Arthur, an idealistic lawyer going through frustrations when he is unable to get one of his innocent clients out of prison due to minor legal technicality. His main problem remains the judge Henry T. Fleming (John Forsythe) who enforces laws by the books and does not care at all about the consequences. The story has many narratives running parallel through the length which include two cases being handled by Arthur, the mental breakdown of his partner Jay Porter (Jeffrey Tambor), his romantic and family life and finally the key point of the movie, him defending Judge Fleming on rape charges. All this happens within a short span of each other and as you go further into the story, you feel the frustration that Arthur goes through. Whether it is to defend a Judge he truly detests or the fact that one of his clients has been rotting in the jail for over a year because that same Judge won’t reopen his case even though he knows that the guy is innocent.
The movie works because of the brilliant screenplay which brings out the frustrations of the profession, even if you are successful. And how the system fails because the people running it are humans, who are not perfect themselves. While it was based on high ideals, and most importantly justice, the profession falls flat in front of human tendencies. Which is to win. A moving piece of work, it has a brilliant performance by Al Pacino whose uproar in the last sequence has become part of movie folklore. “You’re out of order! The whole trial is out of order! They’re out of order!”
Watch the movie.
Share karo yaar... tumhe filmon ki kasam