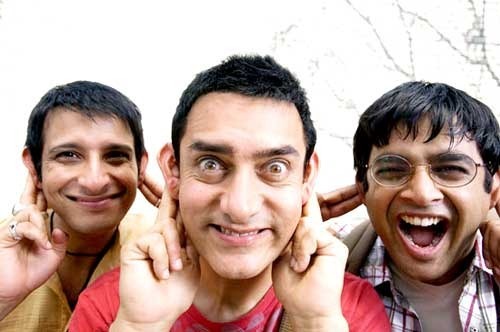 I hardly come across movies where both the present as well as the flashbacks are equally interesting and engaging. 3 idiots does exactly that, flawlessly shifting pace between the one day spent by Raju (Sharman Joshi) and Farhaan (R Madhavan) in search of their old college friend Rancho (Aamir Khan)and the four years spent by them in the Imperial College of Engineering.

The movie is not the story of just the three friends but the story of a whole generation who has grown up with engineering or medical as the only options in life. It is a story rarely told by anyone because it has no heroes and no villains but just normal people trying to do what they think is right.

Aamir Khan is good as Ranchordas Chanchad, the brilliant engineering student who questions everything conventional. Though it is hard to buy Aamir as an 18-21 year old, the movie relies more on the sub-plots and dialogues which diverts the viewer’s attention away from the wrinkles of the lead cast. What I would have really liked to see would have been a few more vulnerable moments for Aamir’s character. His character was too smart and confident for a young student. This is not the case with R Madhavan and Sharman Joshi. They give brilliant performances as Farhaan and Raju respectively, who are confused about what they want out of life and scared shitless about expectations of their parents. Boman Irani plays Viru Sahastrabudhhe, a quirky, over competitive and somewhat heartless director of the institute. Kareena Kapoor as Pia, the director’s daughter and Rancho’s love interest, does not have too much length on screen but does justice to what is expected of her. A special mention for Rahul Kumar who plays the adorable yet sharp Millimetre in the movie. But the real gem of the movie is Omi Vaidya playing Chatur Ramalingam, the overbearing teacher’s pet whose mantra in life is learning by rote and sucking up to everyone possible. The speech scene by him will go down in Bollywood history as one of the funniest one ever.

There are a few melodramatic scenes which are a part and parcel of most flicks. The baby delivery with the help of the vacuum cleaner is a little too much to digest and stretched too long. Also the ‘All is well’ baby kick is overdone through the movie. The over emphasis on suicides could have been avoided. Felt as if it was the underlying tone of the movie with three suicide cases through the length of the movie.
But problems apart, from the first few frames when the camera follows Raju, Rancho and Chatur travelling to Shimla to the last shot in Ladakh, the movie delivers. And full credit to Rajkumar Hirani for breathing life in this story about growing up. The inspiration from Chetan Bhaghat’s book Five point someone is minimal and the story by Abhijat Joshi and Hirani brings about concerns and confusions of students struggling with college and life. Shantanu Moitra’s music is foot tapping and will ring in your head even when you leave the theatre.

3 Idiots stands out because of its intent. To show the shit that happens in life through rose coloured glasses (or in this case black and white) and yet manage to maintain the sensitivity quotient is not easy. Watch this movie because it does that with such ease that you actually come out believing that life will become easier to cope if you think ‘All is well’!