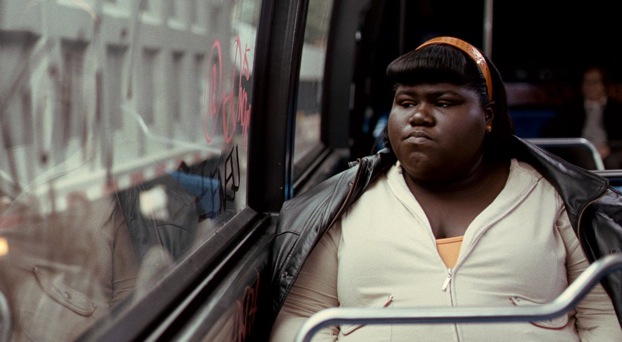 Her world is a dreary, scary place to be. And what makes Precious: Based on the Novel Push by Sapphire, special is that we see the world through the eyes of Precious, the 16 year old. She is fat, can’t read and is pregnant with her second child, a result of sexual abuse subjected upon her by her father. Her mother hates her and abuses her verbally and physically because she sees her as someone who stole her boyfriend away instead of looking at her daughter as an abuse victim. Precious has no hopes in life. She has dreams, though. A world of glitz and glamour, where she is famous and has a handsome boyfriend by her side. She escapes into this world when the world outside seems too hard to handle.
Precious’s life changes when she is put into an alternative school by her school principal. It’s nothing drastic but she finds people, strangers, being nice to her and wonders as to why that is when her own parents think of her as worthless. She also decides to keep her second child, to let him have everything that she couldn’t. And that is when you think that finally her life has begun. Her real life, full of struggles but around people who don’t just see her as a fat girl with a messed up life. But it’s not over. She finds out that her father had HIV and that is when something breaks within her.
Throughout the movie, through the verbal, physical and emotional abuse you never see her flinch. You never see her weak and overcome with sadness. It’s like she had made peace with the life she had and knew that it won’t be going anywhere. But after she hears the news about the virus; that is the first time you see her break down. You see her shattered and accept her past life for what it was. That her parents, who were supposed to protect her, did the opposite. And you see her acknowledge herself to be a victim. But she still picks herself up, for her children. And to look at a 16 year old do that, to move on, is the beauty of the movie.
The movie is brilliantly directed by Lee Daniels and even though it deals with something so dark and ugly, it never makes you look away. Because you want to see Precious come out of it. You will be moved by the several layers of characters that the main leads (Precious and her mother Mary) have. While it’s easy to categorise people as good and bad; saintly and evil, when this movie finished you forget about all of that. All you remember is that sometimes these categorise become redundant. They are of no help. They can put people away for life behind bars, but may not give the victim the strength to move on. They can kill people but can’t do anything to remove the memories’ of abuse.
Gabourey Sidibe plays Precious. She is everything that the character needs to be and you feel her pain. In every single frame. What someone who will really blow your mind is Mo’Nique who plays Mary, Precious’s mother. She is a firecracker. You see her abuse her daughter in this movie and you will forget superhero villains. And then you see her break down in the end accepting the abuse that her daughter went through but still not taking the blame, and yet vulnerable and motherlike…you don’t see such deep character driven performances often. The movie also sees Maria Carey (sans makeup), Lenny Kravitz and Paula Patton play other leads effectively.
I would strongly suggest anyone who can get their hands on the movie to watch it. For telling a story so dark, truthfully and yet aesthetically. This one is one of the best movies that came out last year.
Share karo yaar... tumhe filmon ki kasam