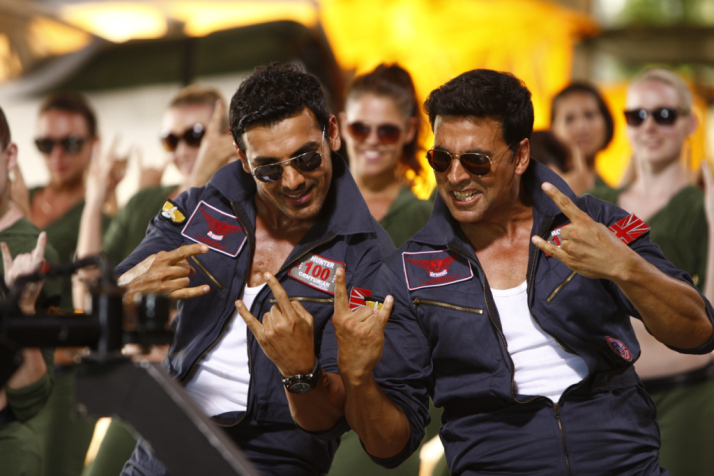 It is not always a joy for me to write reviews for movies. But sometimes there are moments when writing down words becomes almost as easy as breathing. This is what I am feeling now as I go on to describe my experience of watching a movie titled ‘Desi Boyz’.  By the Lord’s grace I did not pay a single paisa to watch this film as it was playing on television as is the case with almost all badly made films in the recent past. The last time I felt this inspired was when I saw Uday Chopra’s attempt at being prince charming in the debacle ‘Pyaar Impossible’. I must say, watching ‘Desi Boyz’, I have a new found respect for that movie and not to mention David Dhawan for producing a string of movies which may not be the full of moving content but were never boring and pretentious. Mr Dhawan’s son, Rohit, the director of this feature film unfortunately lacks the comic sense that his father is quite famous for. And he has a script so nonsensical, atrocious, pointless, obnoxious, talentless, unfunny, that it make you want to tear your hair apart kind of ….  O wait, I forgot what I was saying. To get to the point, the movie is bad. And below is the keen dissection of the movie for your reading pleasure.
The story of Jerry (Kumar) and Nick (Abraham) who live in London, Desi Boyz, tells a tale of friendship, love, how easy it is to study in Oxford and how words like ‘social services’ can be used pointlessly by an English movie watching director in his idiotic plot. To be more precise, recession hits UK and to make money the dynamic duo turn to stripping. Unlike the charming ‘The Full Monty’ which was also based on a similar idea, here, stripping coming very naturally to our dharti maa ke supooths. Self esteem?…What is that?,  Shy? …Never heard of the word and body hair? …. Never had it. This is also the point where Sanjay Dutt is misused like he is nowdays is in many films (Remember Ra. One?). If the tacky costume and icky dialogues were not enough, Mr Dhawan also has the audacity to use the Khalnayak soundtrack for his entry, tainting the music forever. Nahiiiiiiiiiiiiiiiiiiiiiiiiiiiiiiiiiiiiii………. 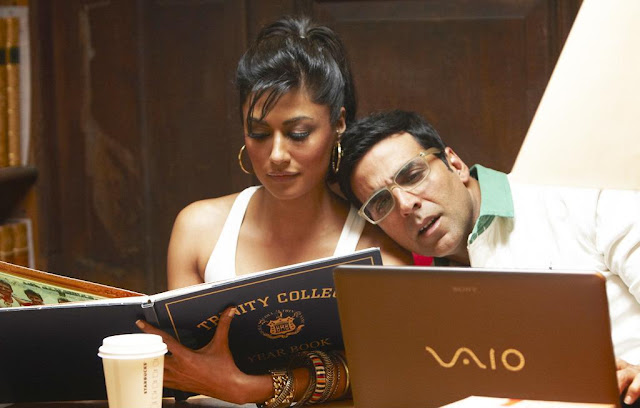 There is also Deepika Padukone in the movie, doing absolutely nothing, which is perfect since she is paired opposite John. I must add, Mr Abraham has never looked more dumb in a movie. He is supposed to pass off as an investment banker but seriously, who are we kidding. Look at his lit up face while he strips off his clothes and you know that this is the one thing he was born to do. If the thought of Mr Abraham as an investment banker is not ridiculous enough there is also a sub-plot about Jerry’s Nephew, who the ‘Social Service Department’ is extremely desperate to donate to a family since his parents died. No one ever thought of just sending the child off to his grand-parents and the rest of the family, back home in India. I guess the parents dying and uncle in London being broke is a good enough to just grab any child and have him up for adoption like he is a lost puppy.
But wait… there is more to come. The second half is all about serious studies, a single scene invoking Nationalism (leave Aryabhata alone. How many times are we going to listen about Zero in movies?) and a very desperate, Behenji turned Mod (Professor Tanya), who has been having sex dreams about Jerry for 12 years and loves playing strip-study while she asks him ‘difficult’ questions which all Indians actually study in 12thstandard. Chitrangada Singh is so obnoxious as a professor that it is actually physically difficult to look at the screen while she is there. The only watchable part of the movie is Omi Vaidya’s outing as a screaming ‘gay/not gay’ man. But even that lasts only 10 minutes.
This is one movie jo daru peene ke baad bhi funny nahi lagegi. And that is saying something!
Share karo yaar... tumhe filmon ki kasam