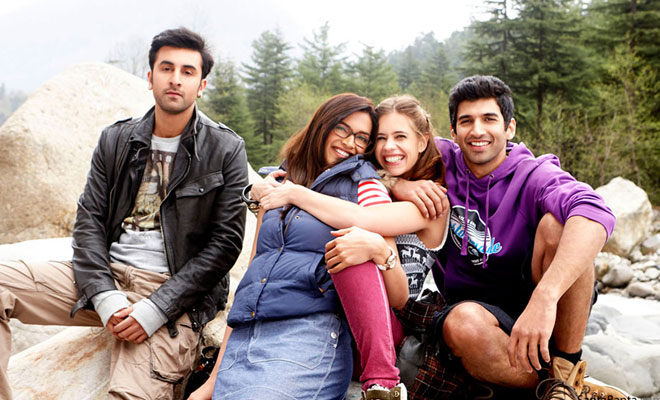 As I got out of the theatre having just finished watching Ayan Mukerji’s latest film ‘Yeh Jawaani Hai Deewani’ I found myself asking a strange question – Can songs can be used both to enhance and ruin a film at the same time? I still do not know the answer to that question.
One of the things I really enjoyed about this film was that spoke about a subject often ignored by cinema – Friendship. The film’s best moments are the ones that will strike the audience directly and probably make you remember a long lost friend who you have ignored for too long with the excuse of ‘work’. Yes, of course it is a love story too but in reality it is a look into the many things that life gives and takes away and how priorities whether personal or professional shape life.
The film’s main character is that of Bunny (Ranbir Kapoor), whose dreams of travelling the world and living a nomadic life are the central point of his existence. The wedding of an old friend Aditi (Kalki Koechlin) makes him come face to face with the many people who he had left behind because of his dreams. These include old friends Avi (Aditya Roy Kapur), Naina (Deepika Padukone) and memories of his father (Farooq Sheikh).
This film is divided into two journeys. The first is the one that Naina takes as a youngster, coming out of her protected life of books and enjoying the experiences of world.  Her scenes with the rest of the group, Arts waale hip log, where she feels out of place because of her lack of experience are the most genuine and heartfelt in the whole film. The second journey is that of Bunny where he has to looks back and question his priorities after having achieved a fair amount of success.
As a viewer, I enjoyed the first journey much more. It’s less taam-jhaam and much more personal. Deepika Padukone, shockingly, gives a good performance with her expressions very much in place. I am not sure I can say the same about her wardrobe. Why was she wearing micro minis in the whole of first half and cleavage baring brouses (yes, braouses) in the second half is completely beyond me. Yes, she is an attractive female, but is it that necessary to show her body parts in every frame of the film? Especially when it’s so out of character? Ranbir Kapoor is adequate but nothing more. His song sequences are overbearing because except for ‘Kabira’ all the other songs actually disrupt the flow of the film. They are all great music videos but that does not mean that they should be part of this film.
My favourite actor from the bunch is Kalki, who after many films is finally doing a role which tries to capture her talent for comedy. Her tomboy act is far more genuine and accurate than Kajol’s Anjali (Kuch Kuch Hota Hain). And so is her transformation in the second half. Aditya Roy Kapur is also a real joy to watch on screen, especially in his scenes with Kalki and Ranbir. I wish more screen time was given to the tension between Avi and Bunny instead of the completely pointless songs in the second half.
Yeh Jawaani Hain Deewani is a beautifully written film. I can almost imagine how it would have read on paper. Unfortunately, the world is heartless place, where sometimes emotions have to be replaced by item numbers. Full points to Ayan Mukherji for writing this film but as a director, he disappoints.
Oh yes, there is a song with Madhuri Dixit too. If not anything else, woh hi dekhne chale jao.
Share karo yaar... tumhe filmon ki kasam